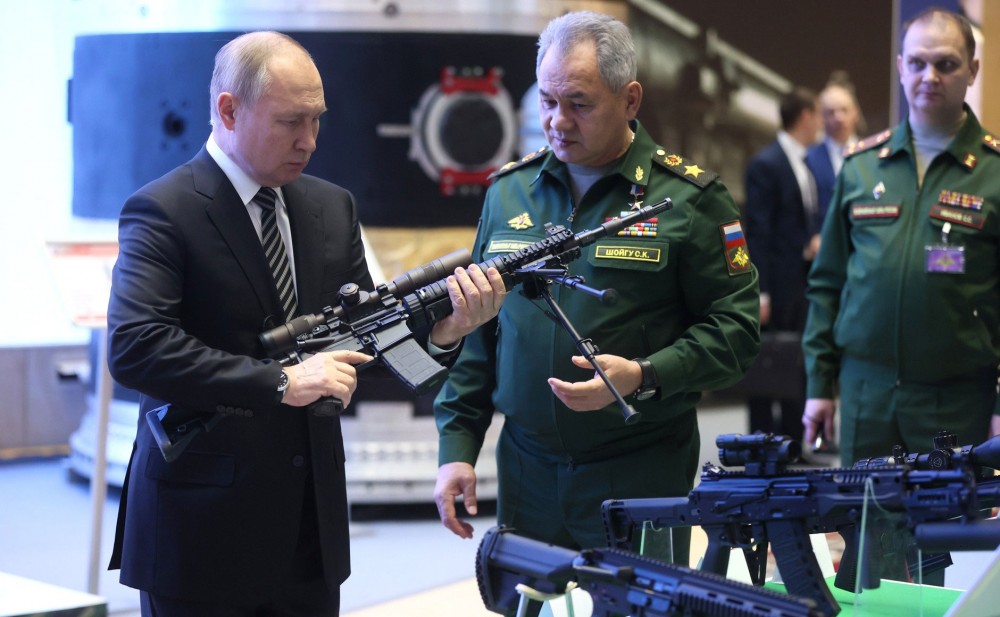 Russia has now sealed off its Arctic borders to aggressive military activity from foreign countries, the defense minister said in this week's address on the state of the Russian Armed Forces.
Read in Russian | Читать по-русски
By

Defense minister Shoigu’s speech in the Extended Board of the Russian Defense Ministry might enter the history books for its level of aggressiveness in relations with western neighbors. No wonder, the text was immediately available in five languages on the website of the Armed Forces. Interestingly, not in Chinese, however.

In the address delivered to President Putin and the top brass of the Russian Armed Forces, Shoigu accused the USA and NATO of encroaching on Russian national security. He claimed that U.S. mercenaries are preparing provocations including ‘chemical substances’ in eastern Ukraine and that they build ‘shooting positions in housing quarters and significant social objects.’

Russia is under threat from Ukraine and its western partner, Shoigu made clear and echoed the message of President Putin delivered in that same meeting.

The meeting in the extended military board comes as Russia has marched up about 100,000 troops along the border to Ukraine and prospects for a large-scale war looks increasingly imminent.

However, the speech of the Russian defense minister included also a mention of another region, normally far more quiet than the Black Sea area. According to Shoigu, the Arctic is of increasing strategic importance and major efforts are made to enhance capacities in the region.

The building of two new military Arctic bases are now completed, the minister said with reference, most likely, to the Nagurskoye in Franz Josef Land and the Kotelnoye in the New Siberian Islands. In addition, the reconstruction of five Arctic airfields are coming to an end, and air defense units are on high preparedness along with forces operating coastal missile complexes.

“The implemented measures has allowed us to confidently seal off the Arctic borders of Russia from aggressive military activities of foreign countries,” Shoigu underlined.

The Navy has long been among the main priorities of Shoigu and the defense establishment. In 2021, three new submarines were included in the naval forces, along with four new surface vessels, ten motor boats and 17 support vessels. In addition, three new coastal batteries were built and four new naval units established.

Among the new submarines are the ballistic missile submarine Knyaz Oleg and multipurpose submarine cruiser Novosibirsk.

The level of modernization of the Armed Forces has now reached 71,2 percent, which is among the highest levels in the world, Shoigu underlined.

And more than 90 percent of Russians are now confident that the Armed Forces are capable of defending the country. Furthermore, 88 percent of the population is proud of the Army and Fleet, he boasted.

And more is underway, the defense minister explained.

In 2022, a total of 21 new launch pads for the intercontinental ballistic missiles Yars, Avangard and Sarmat will be incorporated in the Armed Forces, along with two new strategic bombers Tu-160M and the “Generalissimos Suvorov, a strategic submarine of the Borey-class.

And then comes the new missiles and their storage sites. A total of 602 new modern storage sites for missiles and ammunition have been built. In 2022, Russia will start serial production of the hypersonic Tsirkon missile.