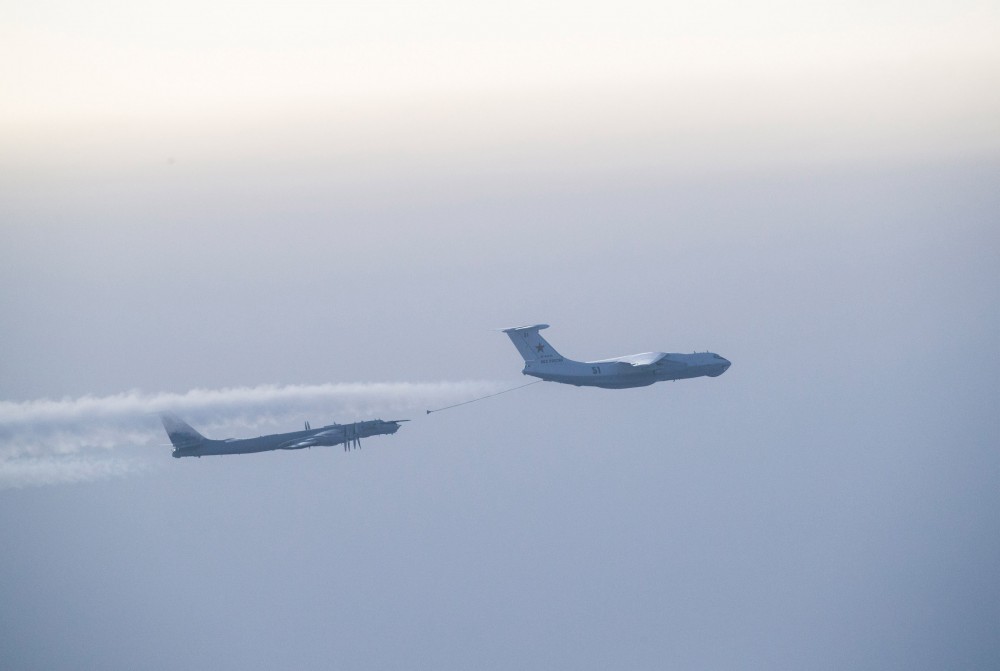 Aerial refueling of the Tu-142 (NATO-classification Midas Bear F) from a Russian tanker plane before the aircraft continued south towards the North Sea area on Thursday. Photo: Norwegian Air Force

Two Russian Tu-142 long-range submarine hunters on Thursday flew out from the Kola Peninsula, continued outside Norway on a southbound mission towards the airspace north of Scotland.
Read in Russian | Читать по-русски
By

“Russia military aviation flew out from the Barents Sea this morning,” says Stine B. Gaasland, spokesperson with the Norwegian Air Force.

“They operated north of Finnmark and were as usual met by our Norwegian F-35s on NATO QRA,” Gaasland says to the Barents Observer.

Several of the Russian planes were also identified by a Norwegian P-3 Orion surveillance aircraft that was on a Barents Sea mission Thursday morning.

The Norwegian pilots took images of the Russian submarine hunter as it was refueling the tanks before flying further west and south.

Gaasland says that of the planes, two long-range Tu-142 aircraft, continued out of the Barents Sea area to the Norwegian Sea and flew south. The Tu-142 is a maritime surveillance aircraft aimed at finding enemy submarines.

This is the second day in a row that several Russian military planes flew out to international airspace northwest of the Kola Peninsula and continued over the Barents Sea with some of them flying all south to the North Sea region.

Why scramble to international airspace?

A nation’s sovereign airspace extends 12 nautical miles beyond its coastline over the territorial waters. Although, Russia has never since the breakup of the Soviet Union violated Norwegian airspace, there are several reasons for scrambling fighter jets when a radar station sees unidentified foreign planes approaching.

Per Erik Solli is a former F-16 pilot at Bodø Air Station and now senior advisor with Nord University. He explains why NATO fighter jets maintain alert readiness at all hours.

“The response time is 15 minutes from a scramble order is given to the fighter aircraft are airborne,” he says to the Barents Observer.

“If the flight time to the intercept somewhere outside northern Norway is 20 minutes, a Russian aircraft flying at 450 knots has flown 260 nautical miles from the scramble order is given to the Norwegian fighter aircraft appearing on their side.”

Waiting until a hostile aircraft has entered sovereign airspace before sending the fighter jets up in the air could be too late. Therefore, intercepts of military aircraft in international airspace in peacetime is normal and ordinary activity.

Solli says this is a normal procedure also for the Russians.

When piloting the F-16s, Per Erik Solli many times met Russian pilots in the skies over the Barents- and Norwegian Seas.

“Everyone is professional and courteous and it is quite common to greet each other with a hand wave.”

Solli says there were even times with friendly humor from cockpit to cockpit.

“The Russian aircrew sometimes showed us what type of magazines they were reading. When we intercepted Russian intelligence aircraft who listen in on our military radio frequencies, they sometimes used to hold up a sign in the window with the letters and numbers in our flight callsign. The gesture was a display of friendly humor among aviators.”

Per Erik Solli says today’s level of activity is about 20% of the level we experienced in the Cold War.

The first Norwegian F-35s to meet Russian military planes are the ones that are on Quick Reaction Alert (QRA) for NATO from Evenes air base above the Arctic Circle. Further south, F-35s from Ørland air station take over. If the military planes continue south over the North Sea, like today and yesterday, the mission is handed over to British fighter jets in airspace ensuring they are continually shadowed.

British Air Traffic Control has previously said Russia’s long-range military aviation is posing a hazard to civilian air traffic as they fly with transponders turned off making it difficult for other planes to know their positions.

Most commercial flights from the Middle East and northern Europe have routes in the skies above the North Sea and the Norwegian Sea when flying to and from destinations in North America.

So does air traffic between Iceland and Europe.

There is currently a group of navy warships from the Baltic Fleet and the Northern Fleet sailing southwest of Ireland towards an announced exercise area in the North Atlantic.

Last week, several of the largest warships in Russia’s Northern Fleet exercised in the Barents- and Norwegian Seas.

Russia’s Foreign Minister, Sergey Lavrov, recently sent a request to all member states in the Organization for Security and Cooperation in Europe (OSCE) where he asks for written answers on whether the countries will comply with commitments not to strengthen their security at the expense of others.