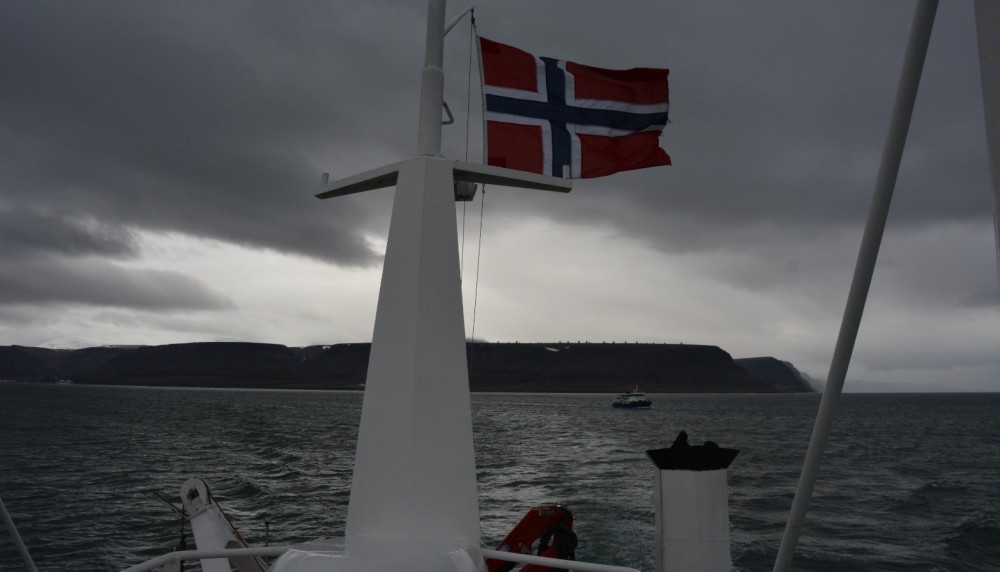 The disrupted cable serves local internet and communications including the satellite part of SvalSat located on a mountain near Longyearbyen. Photo: Atle Staalesen

There were no natural phenomena that led to the break of the fiberoptic cable between the Arctic archipelago and the Norwegian mainland, preliminary police investigations conclude.
Read in Russian | Читать по-русски
By

Norwegian police has made discoveries that indicate human involvement in the Svalbard cable disruption that took place on 7th January this year.

“Preliminary investigations strengthen our hypothesis about human impact leading to the loss of communication in one of the cables,” police lawyer Ronny Jørgensen told newspaper Bergens Tidende.

Jørgensen does not want to elaborate on findings, but makes clear that nature is unlikely to be behind the damage.

Nobody has so far been charged or has status as suspect in the case, NRK reports.

The police statements come after the Svalbard local government vessel Polarsyssel was in the area of the cable breach with an unmanned underwater vehicle.

The cable is operated by Space Norway, and also serves the SvalSat park of more than 100 satellite antennas. SvalSat is today the world’s largest commercial ground station with worldwide customers. Its location at 78°N, halfway between mainland Norway and the North Pole, gives the station a unique position to provide all-orbit support to operators of polar-orbiting satellites.

According to Space Norway, the cable disruption was located somewhere between 130 to 230 km from Longyearbyen in an area where the ocean depths drop steeply to about 2700 meters.

“The failure did not in any way change the ability to communicate effectively with Svalbard in the same manner as before, but it represented a temporary lack of redundancy,” Head of Infrastructure at Space Norway Dag H Stølan says.

The analysis of the failure indicated a shunt failure in the cable causing loss of power to some of the signal repeaters, Space Norway informs. The redundancy was restored on January 18th, and the cable is expected to be fully repaired in course of February.

The Svalbard cable is not the only piece of underwater Norwegian infrastructure that over the past months have been harmed.

In November 2021, the Norwegian Marine Research Institute informed that its Lofoten–Vesterålen Ocean Observatory was out of service after about 4 km of a 60 km long underwater cable somehow had disappeared.

“Something or someone has pulled out the cable in the outer circuit,” said project manager Geir Pedersen.

The cable was first of all applied for marine monitoring, but it also collected intelligence information for the Norwegian Armed Forces.

The Institute of Marine Research reported the incident to the police.

In late November, a research team equipped with a UUV managed to locate parts of the missing cable.

“We have found about 3 kilometres of the 4.2-kilometre-long cable. It is quite far out of position, up to 11 kilometres. Most likely a vessel has pulled the cable out of position”, said Pedersen.

The missing Ocean Observatory cable was found in late November about 11 km from its original position. Film clip by the Norwegian Marine Research Institute