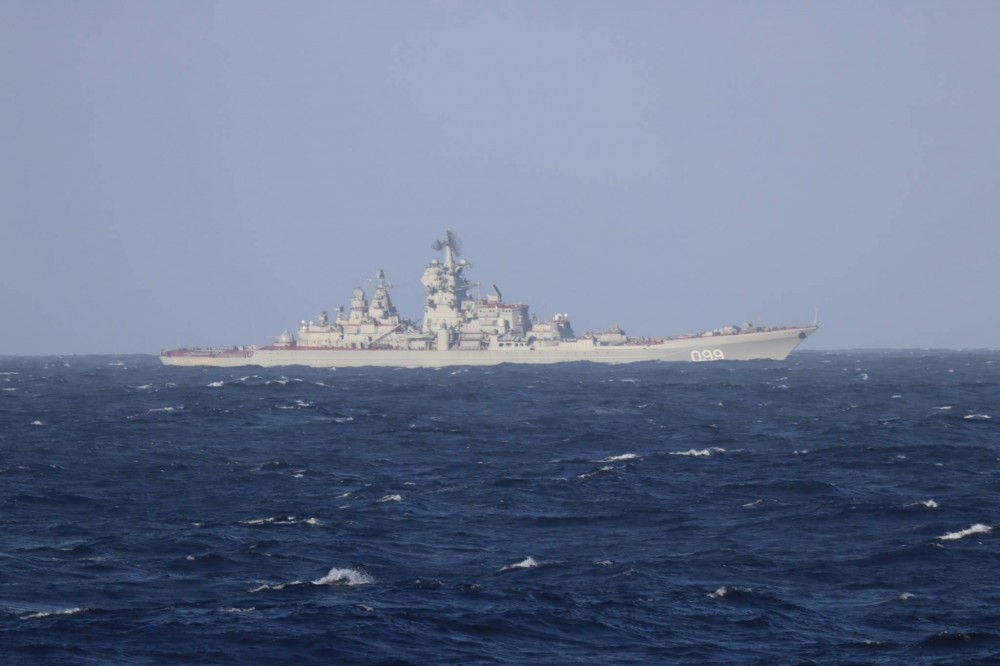 The Russian Northern Fleet exercised with both artillery and surface-to-air missiles at a pre-announced area halfway between Northern Norway and Iceland in the first week of NATO’s Cold Response.
Read in Russian | Читать по-русски
By

The Barents Observer previously reported about Russia’s announced warning zone in the Norwegian Sea, strategically located in the waters between the GIUK-Gap and the Bear Gap.

“This was announced and conducted in accordance with the procedures in a professional way,” he notes.

Moen says both artillery and short-ranged anti-air missiles were used. The activities were observed by the Norwegian Coast Guard vessel “KV Nordkapp”.

The Norwegian and Russian vessels communicated bridge to bridge.

The nuclear-powered battle cruiser “Pyotr Veliky” is the Northern Fleet’s command vessel and was sailing together with the destroyer “Severomorsk”. After the shootings far out in the Norwegian Sea, the battlecruiser sailed closer to Norway and is Tuesday morning some 90 to 100 nautical miles west of Andøya, one of the airbases in northern Norway in use during NATO’s Cold Response exercise.

Tens of thousands of troops from 27 nations are in March and early April participating as NATO and partner countries Finland and Sweden have kicked off the largest military exercise inside the Arctic Circle since the 1980ties.

The large-scale Norwegian-led war games Cold Response was planned years before Russia’s massive invasion of Ukraine, but current tensions between Moscow and the West put an extra shadow into the security picture, also in the far north of Europe.

Norway shares land-border to Russia’s Kola Peninsula, home to Putin’s fleet of ballistic missile submarines, nuclear deterrence forces that are in constant readiness. The submarines sailing out from Gadzhiyevo north of Murmansk patrol the eastern Barents Sea and under the ice in the Arctic Ocean. Other warships from the Northern Fleet, including three amphibious landing vessels, are currently participating in the invasion of Ukraine from the Black Sea.

A key goal of exercise Cold Response is to train reinforcing Norway military with naval and aircraft assets, showing that Norwegian and allied forces are capable of carrying out complete joint operations during snowy cold-climate challenging situations.