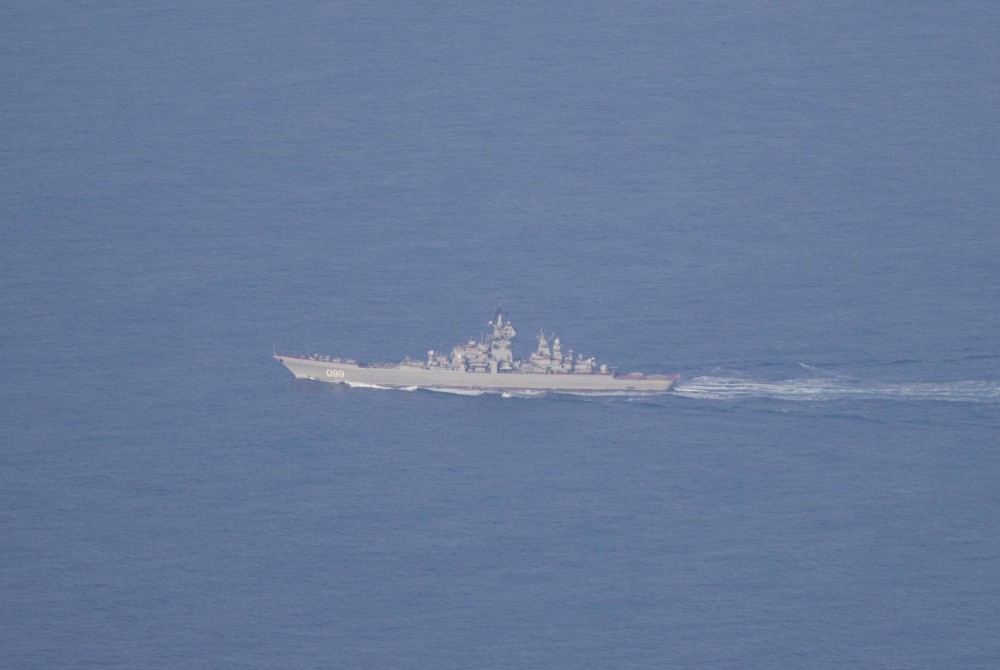 The crew of a P-3 Orion plane took this photo of the nuclear-powered battle cruiser "Pyotr Veliky" sailing west in the Barents Sea on Sunday. Photo: Norwegian Air Force

Russia’s biggest warship, the nuclear-powered battle cruiser “Pyotr Veliky” and the destroyer “Severomorsk” are sailing towards the activated warning zone halfway between northern Norway and Iceland.
Read in Russian | Читать по-русски
By

Tens of thousands of troops from 27 nations are this week participating as NATO and partner countries Finland and Sweden have kicked off the largest military exercise inside the Arctic Circle since the 1980ties.

The large-scale Norwegian-led war games Cold Response was planned years before Russia’s massive invasion of Ukraine, but current tensions between Moscow and the West put an extra shadow into the security picture, also in the far north of Europe.

Norway shares land-border to Russia’s Kola Peninsula, home to Putin’s fleet of ballistic missile submarines, nuclear deterrence forces that are in constant readiness. The submarines sailing out from Gadzhiyevo north of Murmansk patrol the eastern Barents Sea and under the ice in the Arctic Ocean. Other warships from the Northern Fleet, including three amphibious landing vessels, are currently participating in the invasion of Ukraine from the Black Sea.

A key goal of exercise Cold Response is to train reinforcing Norway military with naval and aircraft assets, showing that Norwegian and allied forces are capable of carrying out complete joint operations during snowy cold-climate challenging situations.

On Sunday, a Norwegian maritime patrol aircraft discovered two Russian navy vessels sailing north of Finnmark region in the Barents Sea. “Pyotr Veliky” is the Russian navy’s largest combat ship armed with several tens of cruise missiles, surface-to-air missiles, and other weapons. The battlecruiser normally serves as a command ship when the Northern Fleet conducts exercises in the Barents Sea north of the Kola Peninsula.

It is several years since last time the nuclear-powered battle cruiser sailed into the Norwegian Sea.

“They are heading towards an area in the Norwegian Sea, halfway between northern Norway and Iceland,” he adds.

The Russian activated NOTAM (Notice to Airmen) danger area is west of Lofoten archipelago and outside the main exercise area of NATO’s Cold Response. The danger alert does not indicate what kind of weapons will be used in what is marked as “firing area.”

Ivar Moen says it was “predictable” and “as expected” that the Russian navy would be active in the area outside the coast of Norway during the ongoing NATO exercise.

“It does not fuel tensions in the north. The situation is stable and Cold Response continues as planned,” Moen explains.

“The deployment of large surface vessels to the Norwegian Sea is presumably to demonstrate presence and to observe the Cold Response exercise,” he added.

Åtland does not think the warning area would interfere with, or create complications for, the Norwegian-led exercise which is still in its early stages.

“There may, of course, come more Russian NOTAM warnings and shows of force later in the month, at sea as well as in the air. But we should not be overly concerned about this,” he says.

“This is all part of Russia’s signaling behavior in the northern waters.”

Russia has also currently one Vishnya-class spy ship sailing outside Nordland county in northern Norway, near the waters where about 50 NATO warships are part of exercise Cold Response.

Two weeks ago, Russia informed Norway that it would not send observers to the Arctic winter drill.

During the last NATO exercise in Norway, the Trident Juncture in 2018, Russia established several warning areas, including one in international waters just outside the west coast of Norway, an area that overlapped where NATO warships were sailing. Also, larger parts of Finnmark region, as well as Lapland in Finland, experienced Russian military GPS jamming that disturbed civilian aviation. The GPS jammers were located in the Pechenga valley, near Russia’s border to Norway and the signals were directed to the west.

Cold Response will go on until mid-April.

Russia is leaving the Council of Europe