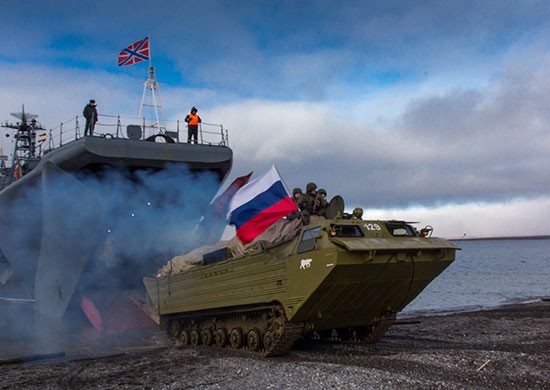 The Northern Fleet has over the past years done extensive training on landing operations. Photo: mil.ru

Sources claim that troops from the 200rd Motorised Rifle Brigade were shelled near Kharkiv and marines from the 61st Naval infantry brigade prepare landing operations near Black Sea cities.
Read in Russian | Читать по-русски
By

Chief Editor of news site censor.Net in a video claims that Ukrainian troops with a Javelin eliminated a self-propelled gun 2S3 Akatsiya belonging to the Russian 200 Motorised Rifle Brigade.

The shooting is reported to have taken place near Kharkiv. It is not confirmed by Ukrainian Armed Forces, nor by the Russian side. But it appears evident that forces from the far northern Rifle Brigade are present in the area.

Ahead of the assault, several videos posted on social media channels displayed southbound train transportation of tanks and armoured vehicles from the 200th Separate Motor Rifle Brigade. The hardware and troops were deployed in the border areas to Ukraine.

The brigade is based in Pechenga, a small military town located only few kilometres from Norway.

The Russian invasion force also includes a big number of troops from the Northern Fleet’s 61st Naval Infantry Brigade. Three landing ships around Christmas sailed out from the Kola Peninsula and made port call in Kaliningrad before they proceeded towards the Mediterranean and subsequently to the Black Sea. On board are troops from Sputnik, the base for the Northern Fleet’s elite forces.

The ships Olenegorskiy Gornyak, Georgiy Pobedonosets and Pyotr Morgunov are believed to be able to carry more than 30 tanks and almost 1,000 troops.

When sailing out of the Baltic Sea in January, the ships were reported to be heavily loaded and low in the water.

The three ships from the Northern Fleet is part of a flotilla of 12 landing vessels that now pose a major threat to towns on Ukraine’s coast.

It is not clear to what extent the landing ships so far have engaged in action, and whether or not the troops and hardware have been put ashore.

On the 28th of February, there were news reports that 11 landing ships had set out from Crimea and there were speculations that they might head towards Odessa.

On the 2nd of March, the Ukrainian General Staff said that it has information about an upcoming landing of troops near Odessa and Zatoka.

“We know which units of the marine infantry that are onboard the ships,” Ukrainian Minister of Defence Aleksei Reznikov said in early February.

Military experts told newspaper Krim-Realii that the flotilla of landing ships could have as many as 4,500 troops on board. They pose a serious challenge to the defenders of the Ukrainian coast.

Potentially, the flotilla could simultaneously attack two parts of the coast. Major parts of Ukraine’s Black Sea coast has shallow waters and sand beaches and consequently considered suitable for attack by the marines.

In addition to Odessa, the forces could set foot on the shores near Mariupol by the Azov Sea.