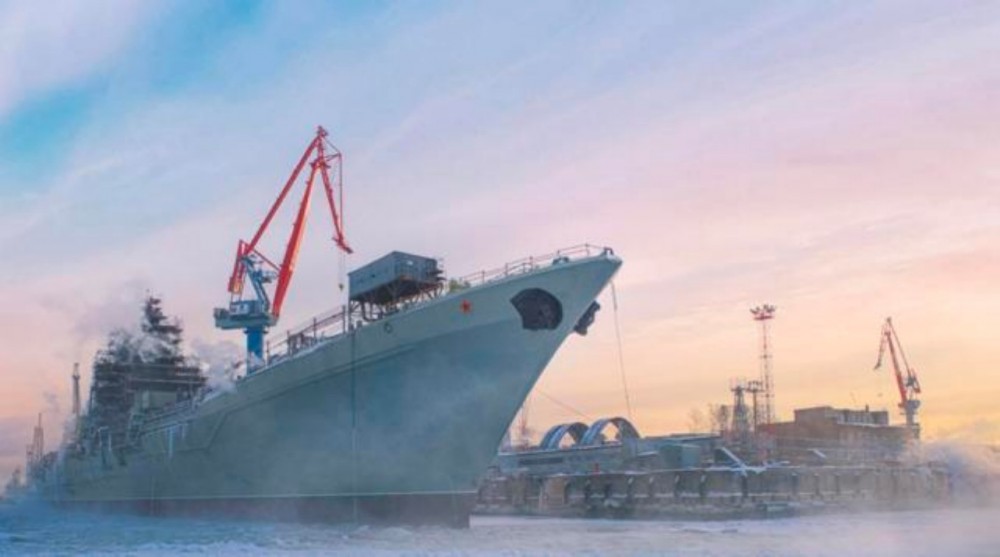 Still plenty of work with the cruiser that ultimately will be the most powerful vessel in the Russian Navy. The reconstruction is conducted by the Sevmash yard that is located on the White Sea coast. Photo: Sevmash

The "Admiral Nakhimov" will be the most powerful surface vessel in the Russian Navy when reconstruction is completed presumably in 2023.
By

The sinking of the Moskva on the 14th of April was a major blow to the whole Russian Navy. Following the fire and subsequent sinking believed to be caused by Ukrainian Neptune missiles, Russia has only two cruisers of the Slava class left. One of them, the Northern Fleet ship Marshal Ustinov, is currently sailing in the Mediterranean, unable to make it into the Black Sea following Turkey’s blocking of the Bosporus.

Russia has no replacement of its lost Black Sea flagship. Over the past decades, the country has built no new big cruisers, only frigates and corvettes.

By year 2027, the Russian Navy is due to include ten new Gorshkov-class frigates and 14 Steregushchiy-class corvettes.

But Russia is doing a major upgrade of the nuclear-powered battle cruiser Admiral Nakhimov (Project 11442М.) The 252 meter long Kirov class cruiser that originally was commissioned in 1988, is to become the most powerful surface vessel in the Russian Navy.

According to the Navy, the ship will be ready for sailing in 2023. However, time schedules have been repeatedly extended and additional delays are likely.

Judging from a recent video of the reconstruction process, there is still a long way to go before the ship is ready.

The more than 25,000 ton deadweight Admiral Nakhimov was in August 1999 docked at the Sevmash yard in Severodvinsk and has since then been on site. In major periods, work has been idle.

A key part of the reconstruction is now completed, shipyard Sevmash informs. Life support and energy systems, as well as new radio-technical equipment and missile and artillery complexes are being installed, the yard confirmed  in August 2020.

In February 2022, the Sevmash confirmed that it is in the process of establishing a crew for upcoming sea trials.

“The scope of ongoing works is huge,” says delivery agent Vladimir Pavlov. And there is still much that remains to be done. More than 5,000 pieces of equipment are to be installed, along with more than a million various items, he says in a comment.

There will also be installed about 200 km of pipes and 1,800 km of cables. All electrical works are conducted by the company Arktika, Sevmash informs.

Russia has three vessels of the Kirov class. One of them, the Pyotr Veliky, is based in the Northern Fleet. It is expected that the Pyotr Veliky will undergo upgrades and modernisation as soon as the Admiral Nakhimov is ready for sailing.

It is believed the that the upgraded battleship will be equipped with missile systems Kalibr, Oniks, as well as the new supersonic weapon Tsirkon. It might also have onboard the systems Fort-M, Pantsyr-M, Paket-NK and Otvet.