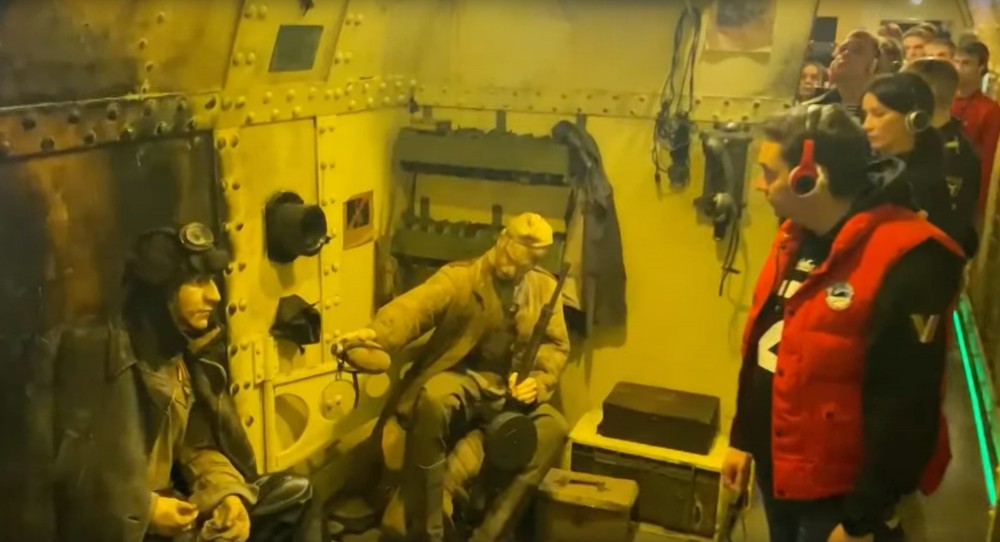 Andrei Chibis compares Russia's war against Ukraine with the Soviet battle against Nazi Germany, celebrates his regional troops in the 'special operation' and warns against foreign 'unfriendly actions' in the North.
Read in Russian | Читать по-русски
By

Governor Chibis this weekend brought his wife and 7-year old son to a tour with the Victory Train at the Murmansk Central Station.

With a large “Z” on his chest, the leader of the far northern and highly militarised region listened carefully as guides accompanied him through the train that is turned into a rolling museum about the Second World War.

The exhibition is organised by Russian Railways and has since 2020 criss-crossed the country. Recently, a new department was added devoted to the “denazification” of Ukraine. Last week, the 12-carriage long train rolled into the Murmansk station.

According to Chibis, the war against Ukraine can be compared with the Second World War.

“This train and these carriages clearly show the connection between the situation back then in Fascist Germany with the reign of one race over another, and what is today happening in Ukraine,” the governor said in a comment following the museum visit. “It is principally important that our people see, remember, and support the protectors of the motherland that today again fight against Nazism,” he underlined.

Andrei Chibis has since the onslaught on Ukraine presented himself as one of Russia’s most eager pro-war governors. He has actively supported the attack on the neighbouring country and on numerous occasions appeared in public with a sweater with the “Z,” the symbol of the “special operation” against Ukraine.

The war is now increasingly an integrated part of the governor’s agenda. In his address in connection with the annual Murmansk Day on the 28th of May, he praised soldiers from the far northern regional brigades for their contributions in the war.

“A special thanks to the Northern Fleet that provide strategic security for our country and to its combatants that together with law enforcement authorities fulfil their task during the special operation,” he underlined in his greeting to the regional population.

He also argues that the war is creating opportunities for his region.

“The current world situation provides additional possibilities for development for our region. Like during the 2WW, our seaport is today important for among other things the dynamic development of the Northern Sea Route

and the rare earth metals and minerals that are in our territory are very relevant for development of our economy.”

Similarly, Chibis on the 28th of May praised the role of Russian border guards. In connection with the Day of the Border Guards, the governor underlined the crucial importance of Murmansk in the protection of the country.

“Our region is a border region and the protection of our Motherland’s northern borders has seriously toughened all generations of northerners,” he said.

With reference to the 2WW, he added that “it is not coincidental that exactly here in the North there are areas where the Fascists did not manage to penetrate the border.”

According to Governor Chibis, the north Russian borders are again under pressure from abroad.

“Today it is again very stormy and there is an enormous number of unfriendly actions against our country, and this puts new tasks, even more serious tasks, ahead of our border guard service, and especially in the North.”

The Murmansk region houses a significant number of military units, among them the 200th Motorised Rifle Brigade in Pechenga and the nearby 61st Naval Infantry Brigade, as well as the 80th Arctic Brigade in Alakurtti. Losses have been dramatic for several of the brigades.

In early March, the Ukrainian armed forces reported that “hundreds of men” from the 200th Motorised Rifle Brigade had been killed during attacks on Kharkiv.

No numbers have been provided from the Northern Fleet. But regional governor Chibis has done his utmost to justify the losses.

“They died heroically and courageously during execution of their duties,” he writes in one of his VK posts.