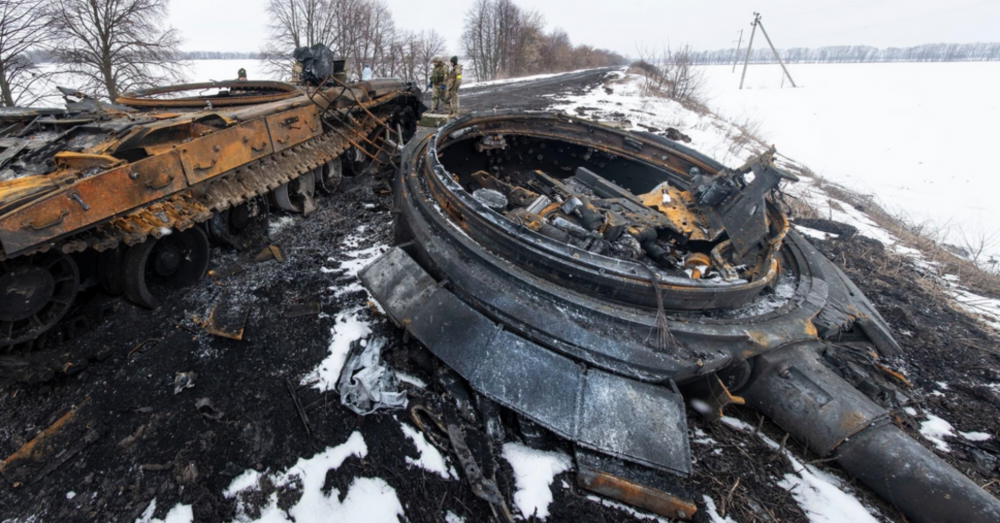 The Russian Army on Friday updated its losses to 1,351 soldiers killed in action in the Ukraine war. An adviser with the President’s office in Kyiv says its armed forces destroyed an Arctic tactical group of which only three out of 648 soldiers survived.
Read in Russian | Читать по-русски
By

Russia’s military forces sent to the Ukraine war from the Pechenga valley near the border to Norway and Finland are hit by staggering losses.

The Barents Observer has since Putin ordered his massive bloody invasion on February 24 followed official statements and social media in the Murmansk region trying to map reports about casualties. Several sources hinted at severe losses in the first week of the war. Later, unconfirmed posts told about 300 servicemen from the north were killed in the fights. Only a few are confirmed, but video footage showed many ruined armored vehicles and tanks.

The first fallen soldiers to be named were Viktor Shokhin, Roman Grudov and Sergey Egzhov.

“We are deeply indebted to them and their families who raised real heroes,” Murmansk governor Andrey Chibis noted in a Vkontakte post on March 17. He said the three were killed as their brigade was attacked.

Last weekend, Chibis posted a photo of Leonid Belyakov, also killed in action (KIA) and belonging to a brigade in the Pechenga valley.

In January and February, social media videos showed how military armored vehicles and tanks from the 200th Motorized Rifle Brigade in Pechenga were loaded on train wagons and transported south to the Ukrainian border.

The soldiers were allegedly told to participate in an exercise as Moscow loudly denied all allegations about an upcoming attack on the neighboring country.

The 200th Motorized Rifle Brigade is considered a very potent military force. In its current form, the brigade was established in 1997, but its history goes back to before the 2WW. In 2014, brigade units participated in the war in Donbas, as reported by the Barents Observer at the time.

In early March, the Odessa Journal could tell how Ukrainian forces attacked the 200th Motorized Rifle Brigade shortly after it crossed the border near Kharkiv. Journalist Yuri Butsov reported from the site that he had counted more than 30 units destroyed and captured, both armored vehicles and KAMAZ trucks.

The Ukrainian defenders used Javelin anti-tank guided missiles, a weapon attacking from top-down hitting at the least protected part of the tank.

Among the tanks listed are 18 T-80BVM, an upgraded battle tank that the brigades in Pechenga got 26 of in 2019.

WAR (yes, we call it by its right name)

The State Duma on March 4 unanimously passed a law that criminalizes sharing what is called «fake information» about the Russian armed forces, including punishment of up to 15 years prison if calling the «special military operation» in Ukraine by its right name: WAR.

Since then, little information about the Russian Armed Forces’ losses in Ukraine has been reported by domestic media. Putin signed the bill into law on March 25.

On Friday, March 25, however, the Ministry of Defense summed up the first month after the invasion of Ukraine. “The special military operation is being carried out strictly according to the approved plan,” noted Major General Igor Konashenkov before he gave the word to Colonel General Sergei Rudskoy, First Deputy Chief of the General Staff of the Russian Armed Forces.

“1,351 servicemen have died, 3,825 have been injured,” Rudskoy could tell, updating the official numbers substantially.

From Kyiv on Friday, Oleksiy Arestovych, an adviser in President Volodymyr Zelenskyy’s office, said in a video-posted daily update that Russia had lost about 16,100 soldiers in the war. Arestovych then detailed an attack by the Ukrainian forces on Russia’s 200th Motorized Rifle Brigade.

“The battalion tactical group of the 200th of a separate motorized rifle brigade, which took part in the “special military operation” on the territory of Ukraine, suffered significant losses in manpower. Of the 648 servicemen who were sent, 645 died. Only three remained, and then two of them were wounded,” Arestovich said.

Arestovich’s claims have been widely referred to in Ukrainian media, including Interfax-Ukraine and Vesti-UA.

The Barents Observer had no further possibility to confirm or disprove any of the information provided by officials from the two sides, Russia and Ukraine.

Both the 200th Motorized Rifle Brigade and the 61st Naval Infantry Brigade are based only a few kilometers from the border to Norway and Finland.