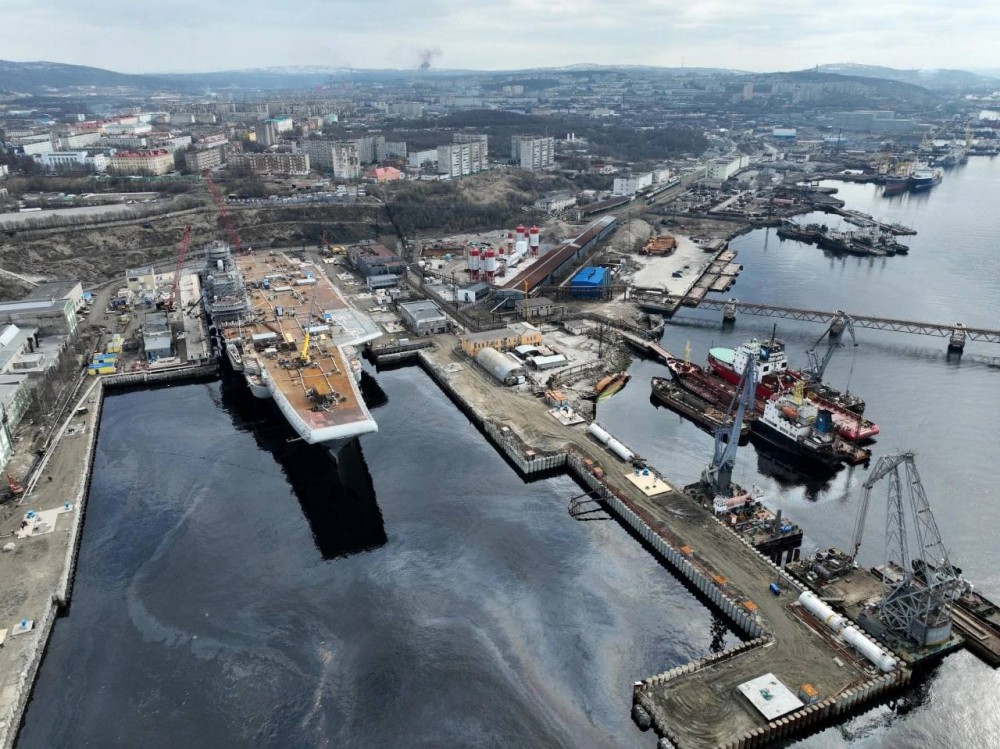 A light oil film on the water is clearly visible hours after the aircraft carrier was put the new docking site at shipyard No. 35 in Murmansk. Photo courtesy of Visualrian

A photo has emerged online showing oil film on the water shortly after the “Admiral Kuznetsov” was moved into the dock at shipyard No. 35 in Murmansk.
Read in Russian | Читать по-русски
By

Origin of the oil is unreported, but there are no other vessels in the dock. The aircraft carrier was moved on Friday, from the shipyard’s northern pier near Atomflot icebreaker base into the new dock, a distance of about a kilometer and a half.

The new dock itself is about 420 meters long and was built as a shore dock after the only floating dock that could hold the huge carrier, the SD-50, accidentally sank in October 2018 while holding the “Admiral Kuznetsov” at shipyard No. 82 in Roslyakovo closer to the Northern Fleet’s headquarters in Severomorsk.

Highly necessary underwater hull works on the 32-years old carrier are urged to be completed before the winter starts so it can be removed from the dock before freezing, a shipyard source tells to state-owned news agency TASS.

Now, as the “Admiral Kuznetsov” is in place, works can continue with closing the dock and pumping out the water, an operation estimated to last for two months. If hull works can’t be completed on the notoriously delayed repair before winter, the carrier will have to stay in the docking position until next summer.

United Shipbuilding Corporation has said the aircraft carrier will be ready for combat in 2023. That is several years later than the original plans for the upgrade work. In 2020, the Barents Observer quoted Russian media saying test sailings should start in the Barents Sea in 2022.

The trouble-hit vessel had a serious fire in December 2019 while at yard No. 35 in Murmansk.

In 2021, the director of shipyard No. 10 in Polyarny on the Kola Peninsula was arrested under suspicion of theft of 45 million rubles allocated to the repair of “Admiral Kuznetsov”. His shipyard’s part of the upgrade contract included cleaning the fuel tanks.

The oil film on the water could also come from older leakages in the ground where the new docking facility is made. Previously, two smaller land-based docks were located here where both submarines and surface warships were repaired.

Additional to the engines, the current modernization work includes the renewal of weapons, electronics and aircraft support equipment. When all work is completed, the warship’s service life will be extended by 5 years.