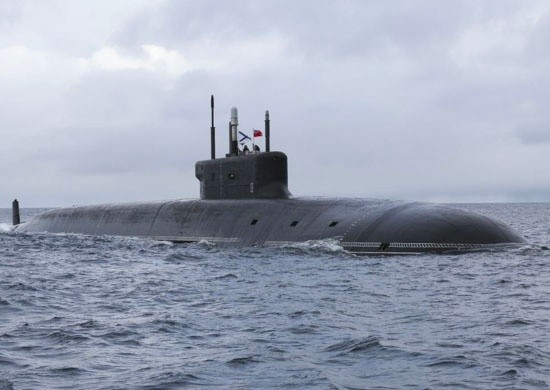 The "Knyaz Oleg" was commissioned on 21st of December 2021. Photo: Ministry of Defense

Five months after it was commissioned by the Navy, the "Knyaz Oleg" engages in torpedo shooting and battle training in the Barents Sea.
Read in Russian | Читать по-русски
By

The brand new strategic Borei-class sub has taken part in a series of exercises aimed at preparing vessel and crew for Arctic operations.

According to the Northern Fleet, the Knyaz Oleg last week engaged in torpedo shooting at a closed shooting range in the Barents Sea. The training was to prepare the crew for opening of holes in the Arctic sea-ice for vessel emersion.

Parts of the torpedo shooting was done in team-play with a Northern Fleet submarine. The Knyaz Oleg also trained counteractions against enemy subs under the sea-ice.

The Northern Fleet has long experience from operations under the ice. In March 2021, three nuclear-powered subs surfaced from under the ice inside an area with a radius of 300 meters near Franz Josef Land. The operation was part of Exercise Umka-21, one of Russia’s most complex military drills ever in the high Arctic.

As part of exercise Umka-21, three subs broke through the sea-ice near the archipelago of Franz Josef Land. Film by Ministry of Defense

The Knyaz Oleg is Russia’s newest strategic submarine. It was on the 21st of December 2021 officially handed over by the Sevmash Yard to the Russian Navy.

Both President Putin and Defense Minister Sergei Shoigu participated at the ceremony in Severodvinsk via video link from the Defense Ministry Collegium in Moscow.

The ceremony included the commissioning also of multi-purpose Yasen-sub Novosibirsk.

“The new submarines have a formidable striking force,” Putin said in his congratulation speech to the shipyard and navy.

The Knyaz Oleg is the 5th submarine of the Borei class now in service. Another five are still at different stages of construction at the Sevmash yard. When all are delivered, the Borei class will be the backbone of Russia’s navy nuclear deterrence. Each of the vessels can carry 16 Bulava missiles, said to have an operational range of more than 8,000 kilometers. Each missile can carry six nuclear warheads.

During test-sailings this autumn, the Knyaz Oleg test-fired a Bulava missile from the White Sea towards a target on Russia’s Kamchatka Peninsula in the Far East.

Following training in the Barents Sea, the submarine is expected to sail under the Arctic sea-ice to the Russian Far East where it will become part of Russia’s Pacific Fleet.