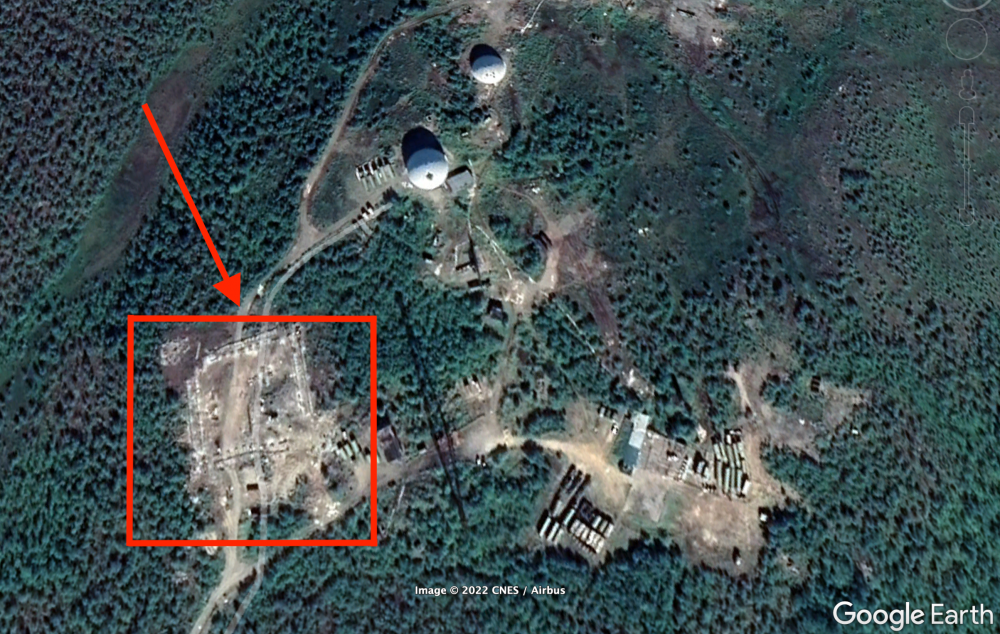 The Rezonans-NE Very High Frequency radar is under construction in vicinity of the older air defense radars just outside Zapolyarny on Russia's border to Norway. Image: Google Earth / Barents Observer

The 360-degree sector of the new Rezonans-NE radar occupies an area of 100 x 100 meters and is said to have capabilities to provide early warning and target tracking against stealth aircraft like the F-35 that both Norway and Finland will operate in the airspace west of the Kola Peninsula.
Read in Russian | Читать по-русски
By

The first radars on the hill above the air base in Korzunova were built in Soviet times. Now, the air base is abandoned and early warning systems have faster flying and more invisible threats to deal with.

Comparing satellite images from 2019 and 2021 gives a good insight into what happens near Zapolyarny, a mining town some 10 km from Russia’s border with Norway.

As Barents Observer reported two years ago, the site was chosen for the Rozonans-NE radar. Recent photos from space now show the work.

The facility consists of four radar modules, each covering 90 degrees, and together can see in a full circular area of scanning. A transmit antenna-feeder and devices for elevation antenna-feeder with the radars data receiving and processing systems are characteristic of the complex that does not have rotating antennas.

The new radar in Zapolyarny is one of at least six similar already deployed, or soon to be deployed, along Russia’s Arctic coastline, from the Kola Peninsula in the west to the Bering Strait in the east.

Two of the Rezonans-NE facilities can be seen when zooming in on Google Earth of Russia’s European Arctic; one near the village of Sjojna at Cape Kanin and one near the Rogatsjovo airport at Novaya Zemlya.

According to the Russian designers, the radar system can spot aerodynamic targets at up to 600 km distance, while ballistic missiles can be discovered from 1200 km.

An obvious reason to locate such early warning radar on the western border of the Kola Peninsula is to protect the airspace from possible enemy attacks on the strategically important submarine bases on the coast of the Barents Sea. The waters from Zapadnaya Litsa to the Kola Bay are home to the Northern Fleet’s bases for both multi-purpose submarines and ballistic missile submarines.

Few places on earth have more nuclear weapons on alert than the Kola Peninsula.

Within range of operation for the radar near Zapolyarny are the skies above both Evenes airport in Norway and Rovaniemi in Finland.

At Evenes, NATO does already have a pair of F-35 fighter jets ready for scramble on Quick Reaction Alert (QRA) to meet and identify Russian planes flying out of the Kola Peninsula. Rovaniemi will be home to the first of Finland’s new F-35s, to be deployed from 2025 and onwards.

Evenes is 570 km from Zapolyarny, while Rovaniemi is at a distance of 380 km.

In 2020, Russian state-affiliated news agency TASS reported that a Rozonans-NE radar system sold to Iran had successfully spotted and tracked U.S. F-35 fighter jets just outside the borders of the country.