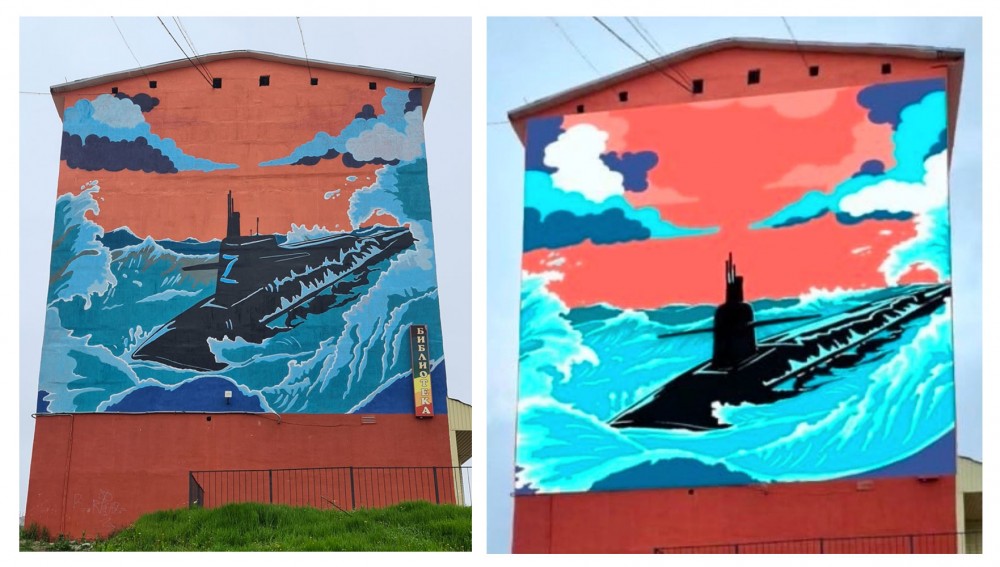 The mural in Gadzhievo first showed a U.S Los Angeles-class sub (right). Then it was repainted to a Russian Delta (left). Photos from VK

The U.S attack submarine in Russian Navy base Gadzhievo has been repainted to a Russian sub carrying a "Z"

"What a splendid mural has appeared in Gadzhievo," regional Governor Andrei Chibis exclaims after painters hastily redesigned the house wall in the Northern Fleet base.
Read in Russian | Читать по-русски
By

It has been a busy week for muralists Natalya Popova and Sergei Beresnev. Only few days ago, the two artists completed a large wall painting in Gadzhievo, the closed military town that houses Russia’s new submarines.

The mural depicted a submarine sailing in surface position surrounded by stormy waves and clouds. The picture had won an online design competition conducted by local authorities.

The only problem was that the submarine was not Russian, but American. The mural displayed a U.S submarine, probably of the Los Angeles-class, a kind of sub that frequently hunts Russian  vessels in the Barents Sea only few kilometers off the coast from Gadzhievo.

The painting on the house wall soon triggered massive protests from locals, many of them submariners that have spent years at sea for the Northern Fleet.

Only few days later, the house wall in Gadzhievo underwent notable redesign. The tower and rear part of the sub were significantly enlarged.

Today, the U.S submarine in the Russian submarine base is no more. On the wall of the downtown house is instead a Russian Delta-class submarine. And it has a “Z” in the front, the Nazi-inspired symbol of Russia’s war against Ukraine.

In a comment on Telegram, Murmansk Governor Andrei Chibis applauds the two muralist. They have made an excellent mural, he underlines.

And he tells quite another story about the painting. According to Chibis, the mural is an initiative of local trust company Almaz. The design was chosen by locals in an online vote, and subsequently painted by muralists Popova and Beresnev.

“Now, a strategic missile submarine watches down on the central square,” he writes.

The governor’s version of the story is supported by company Almaz itself.

“Here is our present to our dear town, [and] as we promised it is ready in due time before Navy Day,” the company writes on its VK page with reference to the 31st of July devoted to Russian Navy sailors.

“And of course, we could not fail to support our friends that are fighting for us in Ukraine,” the company adds, and deliberately includes the letter Z in the post.

The Z is the main symbol used by Russian authorities in their war against Ukraine. Many argue that it resembles the Nazi German use of the swastika.

“Russia will win! Russia always wins!” the post from the trust company reads.

Gadzhievo is one of Russia’s most potent Navy bases. It houses the lion’s share of the country’s new strategic Borei-class submarines, as well as the Yasen multipurpose attack subs.

It is located about 50 km north of Murmansk, and is part of the closed military municipality of Aleksandrovsk. The town has a population of about 13 thousand.