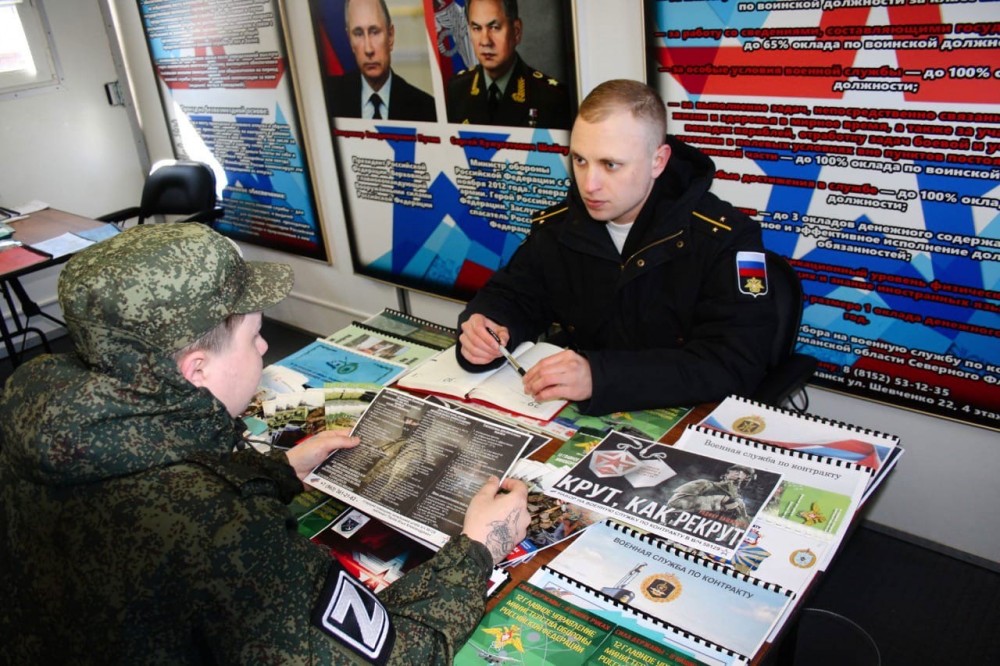 A recent youth festival in Murmansk promoted teenage culture and career opportunities. It was also a venue for recruitment of more troops for military operations.
Read in Russian | Читать по-русски
By

Army recruitment efforts are unfolding across Russia as the country seeks to replace its big losses in Ukraine. In the far northern Kola Peninsula, mobile recruitment offices have popped up in several towns and many young men are lured into the Armed Forces.

The ones who agree to sign a contract are offered a range of benefits like solid salaries, health and life insurance, beneficial apartments and education, the Army informs.

“There are very many privileges for contract soldiers,” an announcement from the Army’s 12th Chief Directorate reads.

The Directorate that is responsible for the country’s nuclear arsenal is one of the military departments actively engaging in the recruitment efforts. Over the last weeks, representatives of the Directorate have toured the region with a mobile office packed with leaflets and other PR equipment.

The mobile offices have been on site also during a number of festivals and public events. Among them was the Youth Forum organized by the regional government of Governor Andrei Chibis in late June. In the event were not only artists doing hipster dance  and government officials promoting life in the Arctic region, but also men in uniform promoting duties for the Armed Forces.

According to representatives of the Army, more than 130 people visited the military stand during the festival and five young men were accepted to entry procedures.

One of them says he is attracted by the benefits offered.

“I have been looking for a suitable job for a long time. I have worked in fast food and transportation, but there I worked both days and nights to ensure income for my family,” he says.

“Now I see my future in military service,” he adds.

During a youth festival in Monchegorsk a few days earlier, a total of 20 young men expressed interest in contract service, the military Directorate informs.

The people who sign up for contracts are offered a minimum wage of 45,000 rubles and will have to serve for 3-5 year periods. They can themselves decide in which units and region to serve, the Army informs.

The recruitment efforts might be a driver behind several of the new battalions now preparing to fight in Ukraine. Among them is an ad-hoc battalion currently training in the Pechenga valley near Russia’s border with Norway consists of reservists, volunteers, soldiers from coastal defense units, military policemen and navy crew members.

Many of them might never return to the North. A big number of the Russian troops fighting the bloody war against the neighboring country have lost their lives.

Several hundred men from the 200rd Motorized Rifle Brigade in Pechenga are believed to have been killed in the early days of the invasion.

The dire need for more men has made Russian authorities relax requirements for contract soldiers. Previous age limitations have been removed and it is now possible for people up to 50 years old to sign contracts.

Conscript soldiers are not allowed to take part in the war in Ukraine, although there are numerous examples of the opposite. In spring 2022, a total of 134,500 young Russian men were summoned to conscript service.