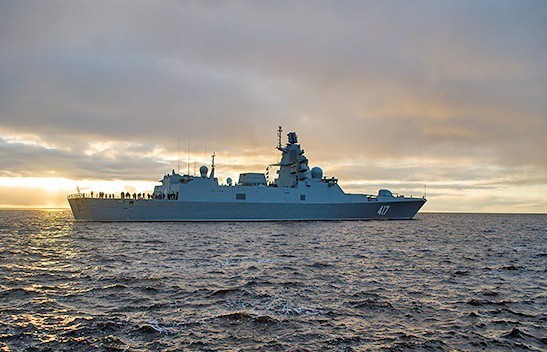 The Russian warship has been followed by Norway’s Armed Forces on its voyages southbound from the Barents Sea to the North Sea where it is west of Stavanger Tuesday evening.
Read in Russian | Читать по-русски
By

The Admiral Gorshkov test-fired a Tsirkon hypersonic missile in the Barents Sea on May 28 and conducted training with other Northern Fleet warships from Severomorsk in June.

Spokesperson with the Joint Headquarters, Major Elisabeth Eikeland, confirms that both Norwegian and NATO allied navy ships have followed the Russian frigate.

“It is KV Bergen that follows Admiral Gorshkov now,” she said to the Barents Observer. The Coast Guard vessel was Tuesday sailing in international waters off the coast of Western Norway, according to the AIS tracking portal MarineTraffice.com

The Russian navy has not published information about the mission. However, Admiral Gorshkov could be heading towards St. Petersburg for the annual Navy Day Parade taking place in late July.

The Tsirkon missile onboard the Russian frigate has been under testing and development for years and is said to reach a speed of up to Mach 8 (eight times the speed of sound). It can carry a payload of about 300 kg, and the latest test in May confirmed a range of about 1,000 km the Northern Fleet claimed.