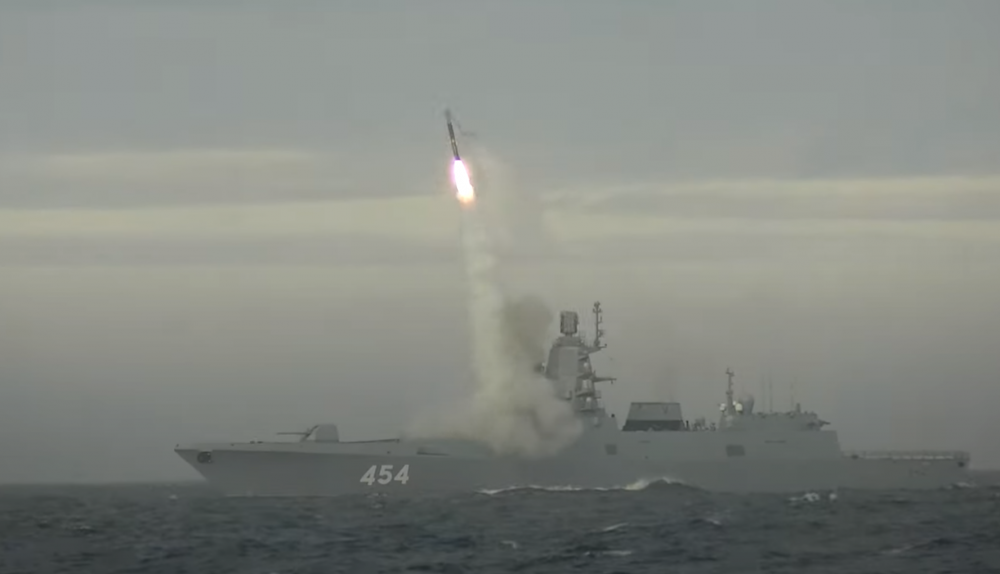 A Tsirkon hypersonic cruise missile was launched from the frigate "Admiral Gorskhov" on May 28. Photo: Screenshot from Defense Ministry video

The test missile was said to hit a target about 1,000 km away, making it the longest test-shooting of the new Tsirkon missile so far.
Read in Russian | Читать по-русски
By

According to Russia’s Defense Ministry, the missile successfully hit the target located about a thousand kilometers away. The information is not verified by any independent sources. The press service of Russia’s Northern Fleet is not allowed to answer questions from foreign journalists, including the Barents Observer.

The Barents Observer on Friday reported about a huge playground in the Barents- and White Seas closed off for civilian aviation for military purposes. A spokesperson with the Norwegian Armed Forces could confirm that they were notified by Russia about the ongoing exercise.

The area partly overlapped to the Norwegian sector of the Barents Sea. Exact location of the frigate «Admiral Gorskhov» at the time of launch is not detailed.

With a maximum speed of 9 Mach (nine times the speed of sound) and the ability to maneuver during flight, the Tsirkon missile has caused considerable concern for the military balance in northern Europe as it is said to be impossible to stop with current anti-missile defense systems.

Tsirkon is the world’s fastest non-ballistic missile and can be armed with either a conventional or a nuclear warhead. The missile is designed for both sea- and land targets and the naval versions include both submarine and surface warship launchers. A version for a coastal launcher complex is said to be under development.

If today’s test can be an indication of the range of the production version with a warhead, the Russian navy could cause trouble for NATO voyages in the Arctic and North Atlantic. Important sealines from Svalbard in the north to west of the Lofoten archipelago in the south would be within range if the missile is launched from a warship in position north of the Kola Peninsula.

In February, just days before Russia’s massive unprovoked military attack on Ukraine, the same “Admiral Gorshkov” launched a Tsirkon missile from a position just east of the Bear Island in the western Barents Sea. International waters, but part of Norwegian Exclusive Economic Zone.