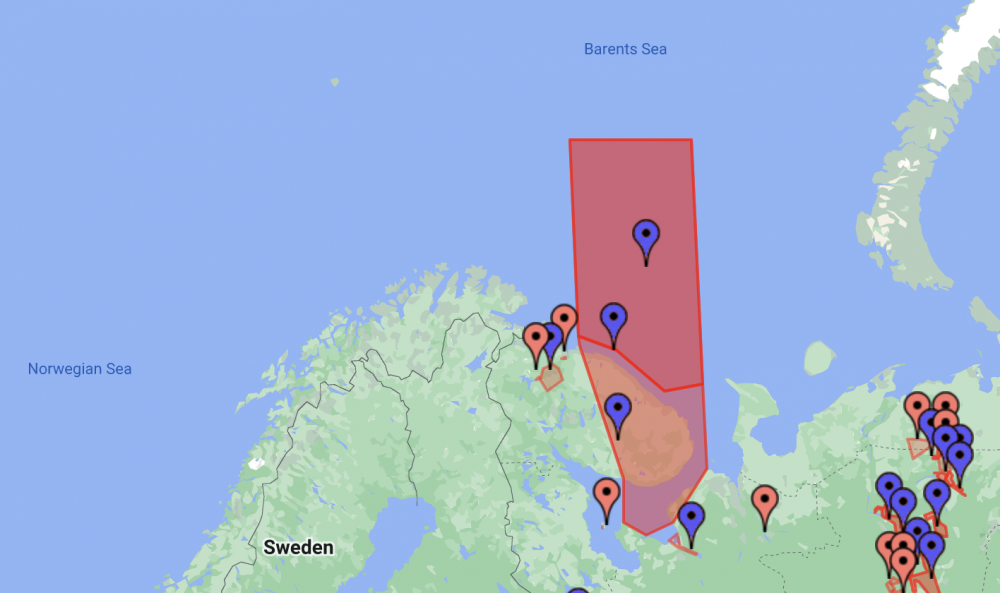 A huge "playground" for weapons shooting is activated for May 27 to 31 across the Kola Peninsula from the White Sea Barents Seas. The northwestern corner of the red-marked area is on the Norwegian side of the delimitation line. Source: NotamMap.net / Barents Observer

The Russian navy closes off huge areas at sea and in air for what could be another testing of the hypersonic Tsirkon missile.
Read in Russian | Читать по-русски
By

Danger zone is activated from Friday, May 27 to Tuesday, May 31 and covers an area nearly the size of Finland.

On several occasions over the last two years have NOTAM (Notice to Airmen) warnings been issued in some of the same areas as Russia has tested its new hypersonic Tsirkon cruise missile. Last December, though, was first time the coordinates for a few nautical miles overlapped into Norwegian Exclusive Economic Zone (EEZ).

Now, it happens again, the map made by the Barents Observer based on the coordinates from the Russian NOTAM warning shows.

The Norwegian military Joint Headquarters confirms that the NOTAM warning partly overlaps west of the maritime delimitation line between Norway and Russia in the Barents Sea.

“We are aware that there is an ongoing Russian exercise in the Barents Sea,” Aursand said. “The exercise is notified in accordance with routines,” he adds.

“This is a phenomenon that we have seen more of in recent years, large NOTAM areas that start in Russia’s EEZ and extend into the easternmost part of Norway’s EEZ,” Åtland said.

He underlines that such military activities are fully legal since it takes place well outside Norway’s territorial waters. Åtland, however, noted that overlapping areas is something new.

“In the past, Russia’s missile launches and live-fire exercises in the High North typically took place either in Russia’s or in Norway’s EEZ. Now we are seeing more Russian overlapping NOTAMs between the two countries’ economic zones.”

In January, a few weeks before Moscow’s brutal military attack on Ukraine, another Northern Fleet shooting exercise took place in waters on both sides of the maritime delimitation line, the Barents Observer reported.

Spokesperson Preben Aursand makes clear Norway will follow the activities. “We expect, as always, that the Russian forces act in a responsible manner when they are training like this in our immediate areas.” He sees Russia’s increased military activity in the north in light of the security situation in Europe.

“Such exercises are therefore no surprise,” Aursand said.

Russia’s Northern Fleet has not detailed what kind of weapons that will be tested. The press service of the headquarters in Severomorsk is not allowed to talk to foreign media, like the Barents Observer.

On February 19, as part of the large-scale strategic nuclear deterrence forces exercise Grom-2022, the frigate “Admiral Gorshkov” conducted Russia’s first-time launch of a Tsirkon missile from the western part of the Barents Sea. The frigate was near Norway’s Bear Island at the time of launch.

Given previous Tsirkon-launches with similar NOTAM warnings as the one activated for May 27-31, it would be no surprise if Russia also this time will try to test the new hypersonic missile.

State-controlled news agency TASS on Friday reported that the developer of the Tsirkon is currently working on a coastal complex for the missile in addition to the surface warship version, submarine version, and air-launched version.

“It is assumed that it can enter service with the Navy before the end of 2022,” a defense ministry source told the news agency.

The Barents Observer has previously reported that the Russian navy’s first large storage site for the Tsirkon missile is under construction near Severmorsk.

The Tsirkon (3M22) is a scramjet-powered maneuvering anti-ship missile that can reach a speed of Mach 8 (8 times the speed of sound). The exact range is not known but is by different Russian media sources said to be up to 740 kilometers in a semi-ballistic trajectory.