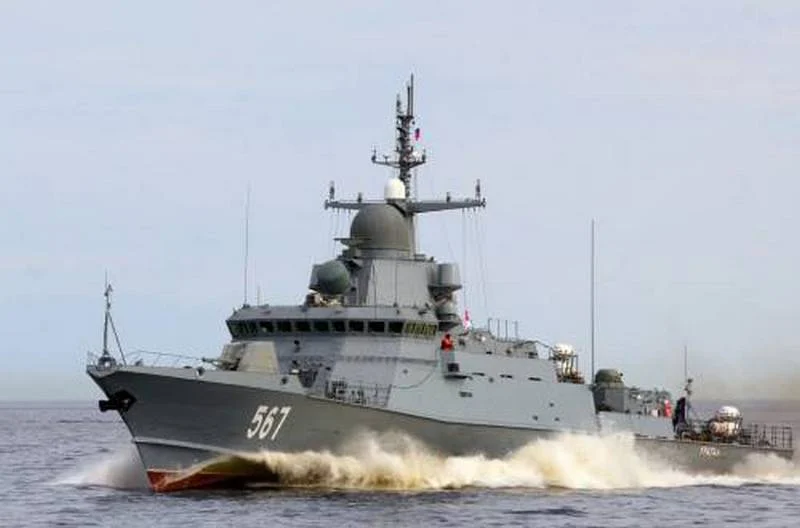 The "Mytishchi" corvette is normally based with Russia's Baltic Fleet, but sailed about 3,700 km north to the White Sea and Barents Sea on a voyage that went inland via the Neva River in St. Petersburg. Photo: Defense Ministry

The special maneuver happened amid the Northern Fleet’s Barents Arctic exercise and shows how Russia can move highly potent missiles from the Baltic Sea to the North without sailing around NATO-controlled Scandinavia.
Read in Russian | Читать по-русски
By

It was the corvette “Mytishchi”, normally based in Kaliningrad, that sailed north to the White Sea, from where a Kalibr cruise missile was launched towards a coastal target at the Chizha shooting range at Cape Kanin in the eastern Barents Sea.

The small warship of the Karakurt class corvette had then sailed some 3,700 km through the Neva River in St. Petersburg, via Lake Ladoga, Lake Onega and further north through the White Sea Canal to the White Sea, the Defense Ministry reports.

The White Sea Canal was built by Gulag prisoners in the Stalin period and connects Lake Onega with Lake Vygozero, from where the river and lakes flow north to Belomorsk on the coast of the White Sea.

The missile launch from “Mytishchi” happened on August 23.

Kalibr is a cruise missile developed for submarines, aircraft, or surface vessels. The latter has a range of more than 500 km, can fly with a supersonic speed of Mach 2.9, and carry a 200 kg warhead. The Russian navy has actively used Kalibr cruise missiles in the wars in Syria and lately in the war on Ukraine.

During the navy exercise, the much larger nuclear-powered battle cruiser “Pyotr Velikye” launched a Granit cruise missile from the Barents Sea at a target on Novaya Zemlya, the Defense Ministry informs in another statement.

As previously reported by the Barents Observer, an area of over 50,000 km2 along the west coast of Novaya Zemlya was closed off for navigation. A similar sized NOTAM (Notice to Air Missions) warning covered an area from the Varanger fjord and Kola Peninsula in the south and far north in the Barents Sea.

Some 10 surface warships, several submarines, as well as coastal air defense systems and airforce units participated in the drill, which aimed to protect the Barents Sea, Arctic archipelagos and the Northern Sea Route.

Two weeks ago, a group of warships set out for the annual Arctic voyage. Those ships, including the destroyer “Admiral Levchenko” and the amphibious assault vessel “Aleksandr Otrakovsky” are currently far north in the Barents Sea, close to the shores of Franz Josef Land.

Russia has over the last decade rearmed its Arctic archipelagos with new runways for heavy military planes and fighter jets and established missile defense systems aimed at ensuring access and control over the Northern Sea Route. Franz Josef Land and Novaya Zemlya are both strategically important for protection of the bastion defense of the Barents Sea region, including the nuclear arsenal and second-strike capabilities.

Both British and American electronic surveillance aircraft have made flights over the Barents Sea in the course of the last week, monitoring Russia’s navy exercise.