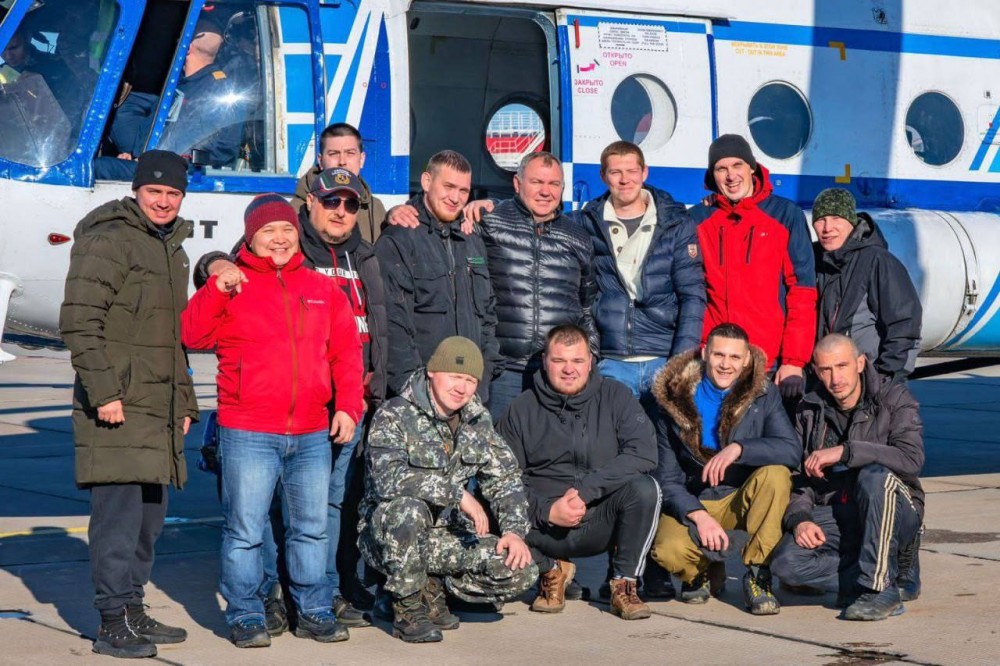 Smiles ahead of the battle. Men from the Yamal-Nenets region go to war. Photo: Dmitry Artyukhov on Telegram

"All of Yamal is with you," the governor of the far northern Russian region proclaimed as he wished his drafted countrymen farewell. Meanwhile, an indigenous peoples organisation in exile calls on all Russian northerners to sabotage the mobilisation.
Read in Russian | Читать по-русски
By

“Our men are arriving to the assembly points and will from there depart to training camps,” Governor Dmitry Artyukhov said in address to the people of the Yamal-Nenets region on Wednesday morning.

According to the regional leader, each of the drafted men will be provided a combat ration, sleeping bag, blanket, as well as basic medication.

“Thousands of families in Yamal are connected with Donbas, and our soul is in pain for this land,” Artyukhov said.

Photos shared by the regional government show men of different age and ethnic adherence. Several of them are representatives of the indigenous Nenets people. They smile, as if preparing for a vacation.

The Yamal-Nenets Autonomous Okrug is one of the richest regions in Russia. From here, several hundred billions of cubic meters of natural gas is annually extracted from tundra fields.

Every drafted men from the Yamal-Nenets will be given a one-time payment of 300,000 rubles, regional authorities say.

The neighbouring region of Komi can not afford anything similar.

According to Komi leader Vladimir Uiba, the drafted men from his region will be given gear and equipment needed, as well as transportation to the front.

Since Vladimir Putin announced a so-called partial mobilisation on the 21st of September, Komi authorities have assembled drafted men in the premises of a local health center for children.

“Who would imagine that our children’s health center “Grenada” would become place for assembly and departure of our warriors that are to protect Donbas and out motherland,” Uiba says in an address.

According to the regional leader, the drafted men are “of very high spirit.” So far, two rounds of drafted men have been sent to the front. Several more groups will be sent in the days before 10th of October, Uiba explains.

Similar drafting of men is taking place in Murmansk. According to regional authorities, the first 87 men were drafted on the 26th of September. Governor Andrei Chibis previously said that a total of 1,000 men are to be mobilised from his region. They will undergo training in St.Petersburg before they are sent to the front.

Since the mobilisation order was given on the 21st of September, about 300,000 Russian men have left the country. Some of them from north Russian regions.

An organisation for indigenous peoples in Russia, based outside the country, now encourages Russians to do what they can to sabotage the mobilisation.

In a statement, the International Committee of Indigenous Peoples of Russia calls on locals from indigenous communities not to get drafted.

“We all want our hunters, fishermen, reindeer herders to stay alive and continue the traditions of their ancestors, and not perish in a foreign country at the behest of Putin,” the statement reads.

“Therefore, we appeal to you, brothers! Sabotage the orders of your superiors. Burn military IDs. Throw out summons to the military. Don’t show up at recruiting stations. Surrender to the Ukrainian side as soon as you get to the front. This way you will save yourself for your families and your indigenous communities,” representatives of the organisation underline.

According to Andrei Danilov, an activist and representative of the Sámi people in the Komi Peninsula, many indigenous men are fighting in Ukraine.

“Many indigenous groups are poor and troubled by economic depression, and federal authorities have never made any major effort to improve their position.”

“Some people, for example from Buryatia, are forced to fight in order to survive, many have been forced into poverty, alcoholism and now they are pushed into battle as cannon fodder,” Danilov says to the Barents Observer.

However, he does not  know of any men from the Sámi community in the Kola Peninsula that have been drafted.

“Considering the low number of Sámi people, the loss of a man would be a great loss for the community.”

He says a growing number of indigenous Russians are starting to openly oppose the war.

“We have indigenous people in Russia that openly speak out about the war, about truth, that it is all launched by Putin and that we must not fight,” Danilov says.

But mostly, people are afraid, he underlines.

“People say that we are in favour or the war, but everyone is afraid of it. It is easy to sit in your sofa and say that you support the war, and if you say something else, you will lose your job or go to jail.”

“In Russia today, there is only one allowed opinion, and that is the opinion of Putin.”