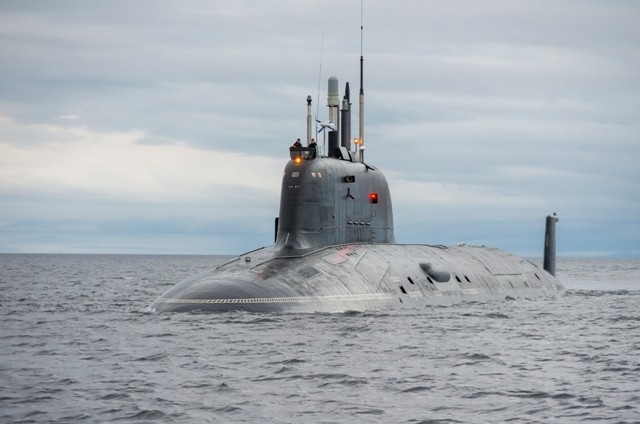 The "Kazan" is the sister vessel to "Krasnoyarsk". Photo: Sevmash

The “Krasnoyarsk” and “Generalissimo Suvorov” are the most advanced nuclear submarines ever built by the Sevmash yard.
Read in Russian | Читать по-русски
By

Protection is ensured by “Dmitry Donskoy”, the only Typhoon-class submarine still in operation, state-affiliated news agency TASS on Tuesday reported.

“Krasnoyarsk” is the third of the upgraded Yasen-M multi-purpose subs armed with cruise missiles, torpedoes, and surface-to-air missiles. The vessel was launched last summer and set out from Severodvinsk to the White Sea for the first sea trials this spring.

For weapons testing and when performing the cat-and-mouse game, hiding and detecting, the larger Barents Sea is more suitable.

The other new submarine currently on sea trials in the waters north of the Kola Peninsula is “Generalissimo Suvorov”. This is the third of the Borei-A class ballistic missile submarines armed with the Bulava intercontinental missile.

When final approvals are given, both submarines are expected to be part of Russia’s Pacific Fleet.

This weekend, the press service of the Northern Fleet said anti-submarine aviation was conducting exercises over the Barents Sea. Il-38 and Tu-142 aircraft, along with Ka-27 anti-submarine helicopters flew tactical search- and tracing training.

Yasen-class is Russia’s 4th generation multi-purpose submarine and is of big concern for NATO in the North Atlantic. Its weapon capacities and ability to sail quietly and avoid detection could pose a threat to both military installations on land and enemy navy vessels.

Last fall, the first vessel of the class, the “Severodvinsk”, made a first-time test launch of the hypersonic Tsirkon cruise missile in the Barents Sea.

Also armed with Kalibr missiles, the Yasen class subs could make big trouble for NATO’s reinforcement plans for Europe in case of conflict by effectively hitting NATO navy ships in the North Atlantic.