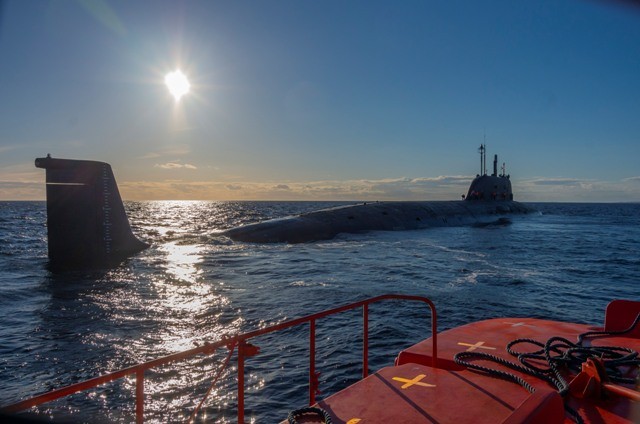 A Yasen class nuclear-powered multi-purpose submarine sails out to the White Sea in the Russian north. Photo: Sevmash

In wake of big conventional losses in Ukraine, the role of nuclear weapons in Moscow’s defence and deterrence strategy may get elevated even further, says an expert on Russian military posture.
Read in Russian | Читать по-русски
By

Preparations are in full swing this week at the giant Sevmash yard in the north Russian city of Severodvinsk. Two brand new nuclear-powered submarines will as soon as the sea ice melts sail out in the White Sea for testing.

The “Generalissimo Suvorov” is of the 4th generation Borei-A class strategic submarines to be armed with 16 Bulava ballistic missiles, each capable of carrying six nuclear warheads.

The second submarine to sail out for sea trials is “Krasnoyarsk” of the Yasen-M class.

Both vessels are now being prepared by the commissioning teams, the shipyard’s own TV-news channel Vesti Sevmash reports.

“All work is carried out in accordance with the schedule,” noted Mikhail Fedyanevsky, head of the delivering team.

While Fedyanevsky is interviewed in front of the submarine, work on installing the rescue pod to the sail takes place in the background.

The solemn ceremony for “Krasnoyarsk” was performed last July. Unlike older attack submarines built in the late Soviet period, the Yasen-M class are multi-purpose vessels that can carry different weapons, including the most advanced new long-range Tsirkon hypersonic cruise missiles.

There are ten silos for vertically launched cruise missiles.

Despite Russia’s current economical meltdown following international sanctions, the Sevmash shipyard assures it will follow the orders of President Putin to “increase the pace renewal of the Navy, build modern surface and submarines of various designs and classes.”

Katarzyna Zysk, a professor of international relations at the Norwegian Institute for Defence Studies, says to the Barents Observer that new submarines are a top priority in Putin’s weapons modernization effort.

She notes that both the Borei and Yasen play “central roles in Russia’s defence and deterrence.”

“Moreover,” Zysk explains, “both are highly prestigious projects. There’s a special place in Putin’s heart for the navy.”

The professor expects no immediate changes.

“The construction program and financial resources assigned to it, may not be immediately affected by the economic meltdown that is ensuing. The mid- and long-term perspective are, however, far more uncertain,” Katarzyna Zysk says.

Additional to “Krasnoyarsk”, the Sevmash yard has four more Yasen-class vessels at different stages of construction. The submarines will be based both with the Northern Fleet on the coast to the Barents Sea and with the Pacific Fleet in the Far East.

There are also four more Borei-class ballistic missile carriers to be floated out in Severodvinsk by 2029 when the class will be the backbone of Moscow’s sea-based nuclear deterrence. The Borei-class replaces the older Delta-IV and Delta-III submarines currently sailing deterrence patrols, including under the Arctic sea-ice.

Katarzyna Zysk says Russia’s big losses of conventional weapons in the Ukraine war could heighten the importance of nuclear weapons even more, including those deployed on submarines.

“Given the weakening of the Russian conventional forces, the role of nuclear weapons in Russian defence and deterrence may get elevated even further.”

Zysk elaborates: “Notably, to date, nuclear deterrence has proved highly effective for Russia in the ongoing confrontation: Putin’s threat of a major escalation to a nuclear level has been among key reasons for the restraint of the West in imposing a military cost and getting directly involved in the war in Ukraine.”

Ahead of the hand-over ceremony of the “Novosibirsk” submarine last December, President Putin warned that Russia is prepared to take military measures to counter NATO’s unfriendly steps.

“In the event of continuation of the obviously aggressive line of our Western colleagues, we will take adequate retaliatory military-technical measures, and react toughly to unfriendly steps,” the president said in his speech to the Collegium of the Defense Ministry.