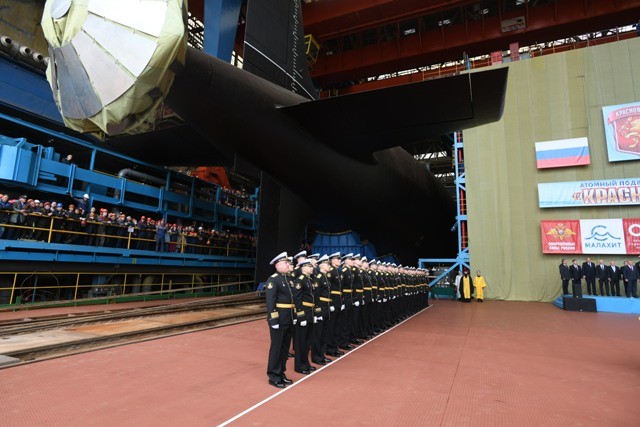 A solemn ceremony for the Yasen-M class nuclear-powered submarine "Krasnoyarsk" took place at the Sevmash shipyard in Severodvinsk on July 30. Photo: Sevmash

The submarine is the fourth in a series of nine Yasen-class multi-purpose vessels for the Russian navy.
Read in Russian | Читать по-русски
By

The submarine, built to carry Russia’s most advanced cruise missiles and torpedoes, was taken out of the giant ship hall at the Sevmash yard in Severodvinsk by the White Sea on Friday, July 30

The ceremony was attended by Commander-in-Chief of the Navy, Admiral Nikolai Evmenov and other high-ranking officials.

The Admiral said two Yasen-class submarines are already on active combat duty, the “Severodvinsk” and the “Kazan”.

And today we are bringing out a serial ship, which I’m sure the Navy will receive on time, with the same high quality which we receive all other ships, Evmenov said in his speed during the ceremony, according to a news update on the portal of the Sevmash shipyard.

“Krasnoyarsk” follows the “Novosibirsk” which was launched from the ship hall at Sevmash in late December 2019. “Novosibirsk” began sea trials in the White Sea a few weeks ago and if all goes well should be handed over to the Pacific Fleet by the end of 2021.

The five next submarines in the Yasen-M class currently at different stages of construction are the “Arkhangelsk”, “Perm”, ”Ulyanovsk”, “Voronezh” and “Vladivostok”. The subs will join the navy in the period 2023 to 2027.

Each Yasen-M class submarines have a crew of 64. The submarine is 130 meters long, has a displacement at surface of 8,600 tons. It has eight vertical silos for Oniks, Kalibr or Kh-101 cruise missiles and 10 torpedo tubes. The submarines will likely in the future also be armed with Russia’s new hypersonic Tsirkon cruise missiles currently under testing.

Russian submarine building is now at a post-Soviet peak, with series of both multi-purpose subs with cruise missiles and ballistic missile subs in pipe.

Last December, the Barents Observer reported that the Sevmash yard now has more than 30,000 employees and 15 nuclear-powered submarines under construction.