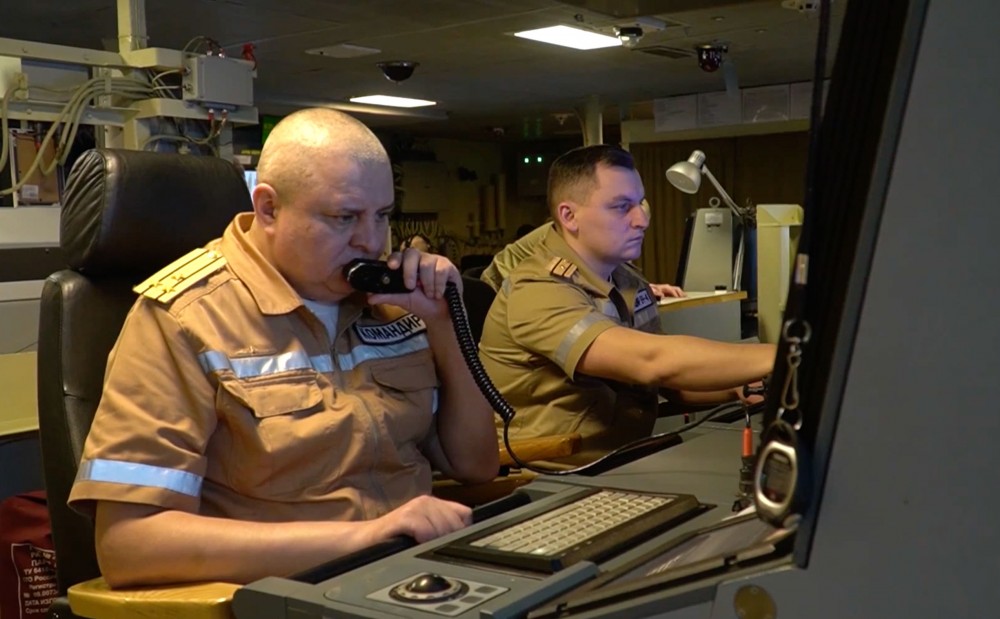 Weapons commander giving the order to launch a Tsirkon-missile during the simulated exercise. No real weapons were fired. Screenshot from Ministry of Defense video

Putin claims the Tsirkon-missile represents one of Russia’s most potent capabilities. A simulated launch took place in waters southeast of Florida in a well-organized propaganda mission.
Read in Russian | Читать по-русски
By

The Northern Fleet frigate Admiral Gorshkov sailed out of Severomorsk just after New Year and headed south outside the coast of Norway on what was announced as a long-lasting world-ocean voyage.

A few weeks earlier, President Vladimir Putin bragged about the frigate’s weapons in his speech to the collegium of military commanders in Moscow.

“In early January next year, the frigate Admiral Gorshkov will enter combat service with the latest, I repeat once again, sea-based hypersonic missile system Tsirkon, which has no analogs in the world,” Putin said.

The Admiral Gorshkov was en route towards Durban where it will join navy vessels of South Africa and China for a joint exercise in February. South of the Bay of Biscay, however, the frigate set a course westbound in the Atlantic.

The warship is followed by the Northern Fleet tanker Kama, which unlike Admiral Gorshkov is sailing with her AIS-tracker turned on. The tanker is currently in the West-Atlantic, about halfway between Morocco and Florida.

The Russian Defense Ministry on Wednesday published a video from the frigate’s computer-simulated exercise.

Although not a live-fire exercise, the drill sent a clear signal: Russia can bring its hypersonic cruise missiles to the West-Atlantic, far away from home waters.

“In accordance with the training situation, the frigate Admiral Gorshkov worked out the organizing of a missile strike launch with a hypersonic Tsirkon-missile at a sea target, a ship of a mock enemy located at a distance of more than 900 kilometers,” the Defense Ministry said in a statement.

Kristian Åtland, a Senior Research Fellow with the Norwegian Defense Research Establishment, said to the Barents Observer that the event was “probably meant to send some sort of signal to the U.S. and NATO.”

“But the Russian Navy is clearly in a disadvantaged position in this part of the Atlantic, and activities like these are unlikely to deter anyone. The presence of a Russian frigate, accompanied by one or two support vessels, hardly qualifies as a display of force,” Åtland said.

The Northern Fleet frigate is the first warship in the Russian navy armed with the new Tsirkon missiles. Tsirkon is a maneuvering anti-ship missile with a range of about 900 km. It flies in a semi-ballistic trajectory and can travel 7-8 times the speed of sound, making it nearly impossible to defend against.

As tensions between NATO and Russia are growing, the simulated launch exercise in waters west of Florida gets big attention in state-controlled Russian media; with top stories in TASS, RIA Novosti and Vesti.