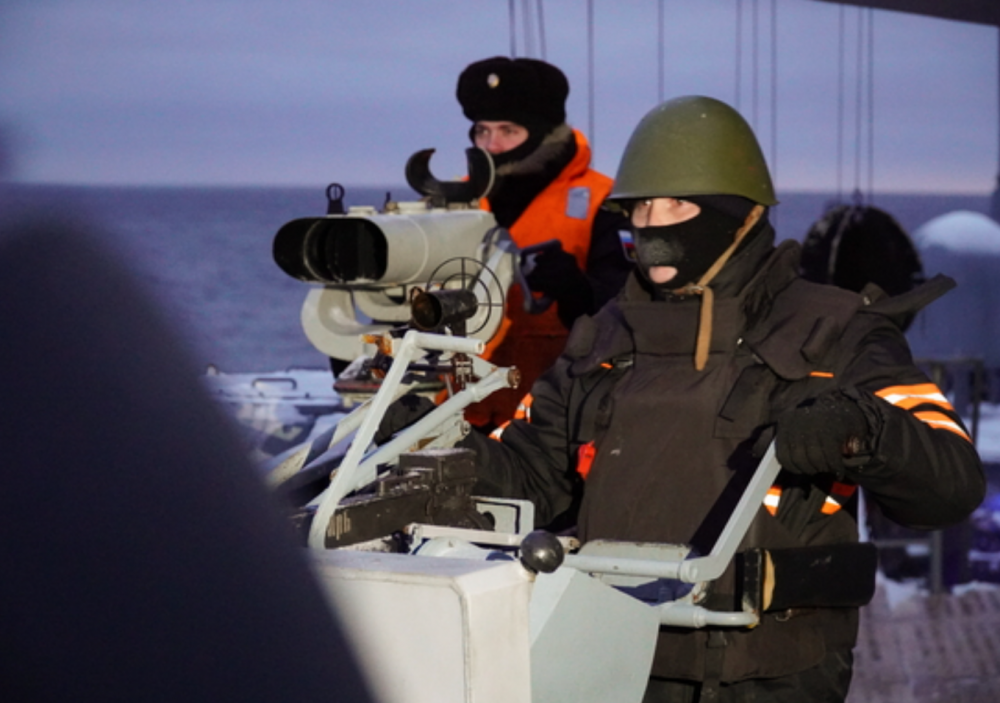 Crew manning the guns on the deck of frigate "Admiral Gorshkov" during final training in the Barents Sea in December. Photo: Northern Fleet press service

The navy frigate "Admiral Gorshkov" sailed north from the Baltic Sea in December for final readiness tests north of the Kola Peninsula. In January, the Tsirkon-armed warship embarks on unknown mission.
Read in Russian | Читать по-русски
By

“In early January next year, the frigate “Admiral Gorshkov” will enter combat service with the latest, I repeat once again, sea-based hypersonic missile system Tsirkon, which has no analogs in the world,” Vladimir Putin said in his speech to the collegium of military commanders on December 21.

At the time, the frigate sailed the Barents Sea conducting a series of exercises, the press service of the Northern Fleet informed after completion on December 28.

Commissioned in 2018, the lead ship “Admiral Gorshkov” is deployed to the Northern Fleet and was the first surface ship to test the hypersonic Tsirkon missile in the White Sea and Barents Sea. Four times in 2020, as previously reported by the Barents Observer. A surprise test again happened from the Norwegian sector of the Barents Sea a few days before Putin ordered his troops to invade Ukraine in February.

Now, the warship is the first in the Russian navy to embark on a long-distance voyage allegedly fully armed with combat-ready Tsirkon missiles. Moscow’s own military propaganda channel TV Zvezda reported from the Barents Sea that the frigate “will very soon become the most dangerous enemy of surface ships in the world’s oceans.”

Tests in Russian Arctic waters have proven the Tsirkon missile to hit surface targets at sea from a very long distance, like during a launch from the White Sea when the missile flew over the Kola Peninsula and allegedly hit its exercise aim in the Barents Sea.

Exact characteristics are classified but the Tsirkon missile is believed to have a range of up to 1,000 kilometers and a ballistic acceleration of up to Mach 9 - nine times the speed of sound.

If Russia’s plan is to sail the frigate to the Mediterranean, Ukrainian navy targets or infrastructure onshore are within a 1,000 km distance of range from the Aegean Sea.

While there is no strategic logic in using an ultra-expensive hypersonic cruise missile toward targets in Ukraine, a more probable mission for “Admiral Gorshkov” would be to deter NATO carrier groups in the Mediterranean or North Atlantic.

For NATO, the upcoming voyage will likely be monitored closely. When sailing north a few weeks ago, the Norwegian navy followed the frigate in international waters.

The Russian frigate #AdmiralGorshkov is sailing north along the Norwegian Coast, probably headed for its home base in Kola. The frigate is sailing legally in international waters, but Norwegian military vessels from @Sjoforsvaret are following and monitoring the #Russia frigate. pic.twitter.com/UcSRb1C4B9