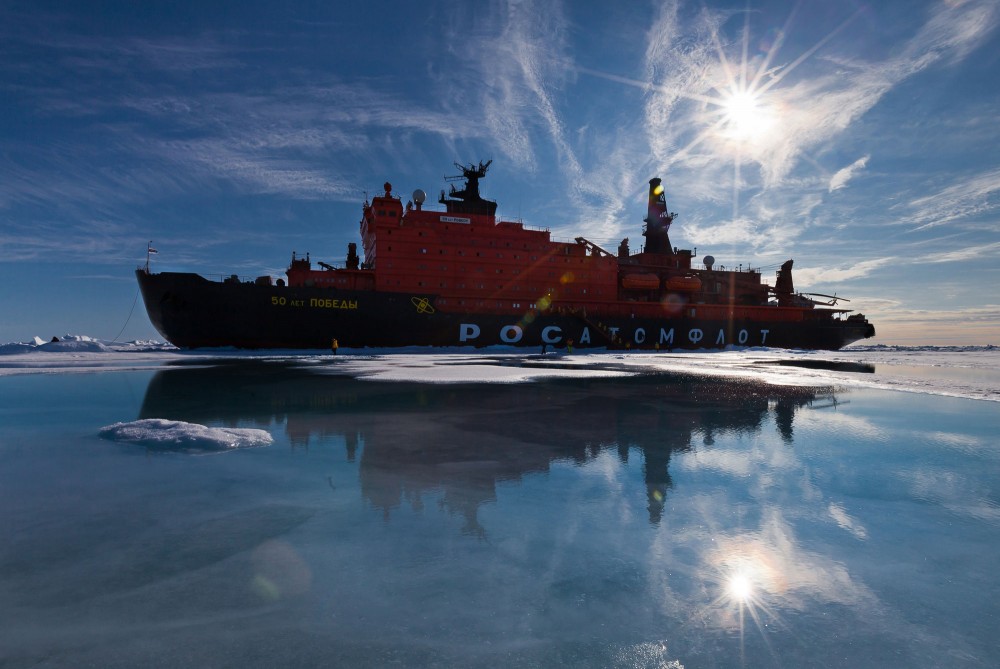 Been there, seen that: 600 tourists pay up to $43,000 each to crush through the ice towards the top of the world before it melts away.
Read in Russian | Читать по-русски
By

«50 let pobedy» - the most powerful icebreaker ever built will serve as a cruise-ship for some of the best-paying travelers this summer. With start in Murmansk, the nuclear-powered giant sails towards the North Pole five times from June to August. Each tour takes 120 passengers.

Poseidon Expeditions, one of the operators organizing the tours, promotes the feeling of crushing through the ice like this: «As we make our way across the ice cap, you witness firsthand the ship’s awesome power as massive ice blocks give way under the enormous bulk of the spoon-shaped bow. The sensation of being on deck at this time is surreal and unforgettable.»

Maybe more unforgettable today than tomorrow. The sea ice is currently melting away in record speed. Arctic sea ice gets thinner and younger, making it move faster and breaks up more easily. This is the consequences of global warming, making the last few winters in the high north weirdly warm.

National Snow & Ice Data Center at the University of Colorado Boulder follows the development by studying satellite data. As the Arctic sea ice was at its maximum extent in March, the centre concluded that 2018 became the second lowest extent in the 39-year satellite record, falling just behind 2017. Worse: the four lowest seasonal maxima have all occurred during the last four years.

Polar scientists predict the North Pole could be ice free within a few decades. In summer.

Russia’s fleet of nuclear-powered icebreakers is state-owned and operated by Rosatomflot in Murmansk. Director of the fleet, Vyacheslav Ruksha, says bringing tourists to the North Pole in the summer season isn’t among the most profitable voyages the icebreakers make.

«Such tours are far from being a main economic interest,» Ruksha says in an interview with TASS. «We are interested in this as a school, a kind of free advertising of our work.»

The icebreakers are normally opening way for vessels sailing along the Northern Sea Route, from the Kara Sea to the eastern northern shores of Siberia. In summer, however, most icebreakers are at port in Murmansk for maintenance.

The first North Pole tourist cruise was arranged in 1991. The first time a Soviet icebreaker reached the geographical North Pole, though, was in 1977 when «Arktika» became the first surface vessel to make it all the way to the top. Last year, a 40-years anniversary voyage sailed the same route as «Arktika» did. That voyage managed to set new world record on the route, sailing from Murmansk to the North Pole in just 79 hours, less than half the time it took in 1977.

In case you wonder: tickets for a bed onboard the North Pole cruises starts at $27,295 when you are two sharing a cabin. The 33 m3 Arktika suite, on the top deck of the icebreaker, will cost you $42,990 per person.