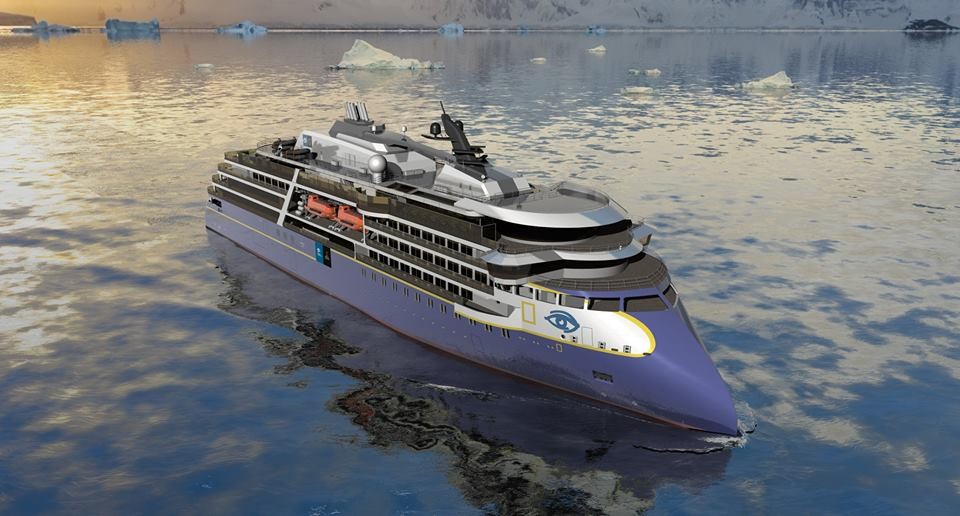 "National Geographic Endurance" is purpose-built for polar navigation. Te characteristic ship X-bow design is is used for increasing the fuel efficiency and safety of the vessel at sea. Illustration: Lindblad Expeditions

2020 was the year when many new-built luxury polar classed cruise ships were supposed to bring wealthy tourists to the Arctic. The start of the season couldn’t be worse.
Read in Russian | Читать по-русски
By

“We have suspended all voyages for our fleet and charters through April 30,” is the short answer from Patty Disken-Cahill, press contact with Lindblad Expeditions, when asked by the Barents Observer about the maiden voyage of the cruise pioneer’s brand-new ship.

Aimed for up to 126 passengers, the “National Geographic Endurance” should leave port in Longyearbyen on April 3rd for a one week voyage around Svalbard.

With most planes grounded around the world, national borders closed, restrictions on foreigners to Svalbard and general fear for infections, the coronavirus has put an end to all cruise voyages in the Arctic for the start of the season.

Nobody can today say what will happen to the rest of the summer season for cruise passengers up north.

Not a single person in Longyearbyen has tested positive for the coronavirus. Sysselmannen, the Governor of Svalbard, wants to keep it that way and published updated requirements Thursday morning. Everyone arriving at Svalbard, either by boat or airplane, have to stay quarantined for 14 days.

On the mainland, Norway’s borders are closed for non-Norwegian travelers. Going through Oslo or Tromsø airport is the only way to fly to Longyearbyen. In practice, no embarking cruise passengers have any chance of getting to Svalbard.

Lindblad Expeditions’ four April voyages would have been a record-early start for expedition cruise ships sailing at Svalbard.

Hurtigruten originally scheduled its first northbound Svalbard voyage to start from Bergen on April 23. That tour is no longer listed. Hurtigruten, though, are still selling tours for the rest of the spring and summer season with the first departure from Longyearbyen with the ship “Spitsbergen” on May 5th.

With 45 departures from Longyearbyen between May and September, Hurtigruten is the largest cruise operator in Svalbard waters.

26 expedition ships are scheduled for voyages to the northern and eastern icy waters of Svalbard in the period April to August 2020, according to a review by the Barents Observer of the cruise companies’ own itineraries.

The above-mentioned cruise-liners are only those sailing expedition ships with a maximum of a few hundred passengers. In addition, comes the larger cruise ships sailing the non-icy waters of western Spitsbergen, making shorter port-calls to Longyearbyen.

The economic loss for the Arctic cruise-liners cancelations due to the coronavirus could be huge.

Patty Disken-Cahill with Lindblad Expeditions will not comment on the financial impact.

“We are a public company and cannot comment on that,” she said.