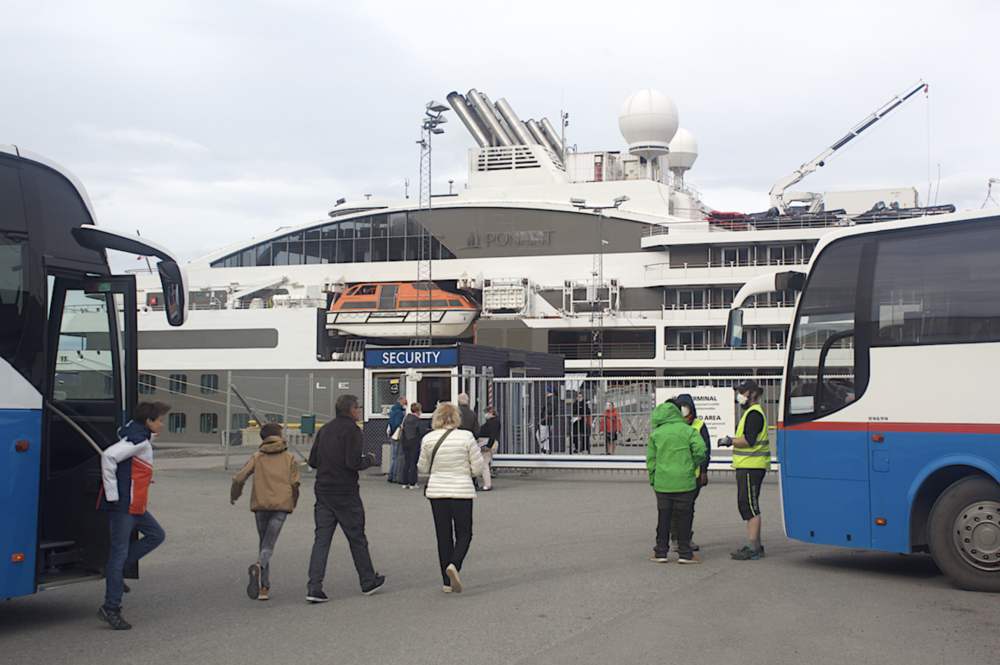 Norway bans all cruise ships with 100+ on board, but Ponant is still selling tickets for next week's luxury Svalbard voyage

Le Boréal is currently the only expedition cruise ship sailing the waters around the Norwegian Arctic archipelago.
Read in Russian | Читать по-русски
By

The suspension of arrivals by cruise ships with more than 100 people on board comes as an urgent move by the Norwegian government. Last week’s coronavirusoutbreak among crew and passengers on board Hurtigruten’s M/S Roald Amundsen has deeply disturbed health officials and politicians.

So far, 37 of the crew and 16 of the passengers have tested positive for COVID-19, according to the Norwegian Institute of Public Health. The M/S Roald Amundsen arrived in Tromsø after a cruise to Svalbard.

Ponant and Hurtigruten were the two only cruise liners relaunching Arctic expedition cruises to the archipelago after Norway lifted the ban on tourists to Svalbard as of July 15.

Hurtigruten announced the same day a temporarily suspension of all expedition cruises until further notice. While the M/S Roald Amundsen stays at port with the crew quarantined on board in Tromsø, the M/S Spitsbergen sailed from Svalbard towards Tromsø after being denied port call to Longyearbyen. Also the M/S Fridtjof Nansen stopped sailings.

Ponant’s Le Boréal is currently the only expedition cruise ship sailing the waters around the Norwegian Arctic archipelago.

The office of The Governor of Svalbard confirms to The Barents Observer passengers on board the current cruise, soon to arrive in Longyearbyen, will be allowed to disembark for a flight home. There are no indications of any COVID-19 infections on board.

The two next voyages, though, will not be allowed unless there are less than 100 people on board. The Le Boréal has a crew of about 140 and can take up to 250 passengers on Arctic voyages.

On Thursday, three days after Norway’s new regulations, Ponant is still selling tickets for the tour departing Longyearbyen on August 15 and disembarkation at the same port on August 28.

According to the itinerary, the luxury cruise ship will make a landing at the Soviet ghost town of Pyramiden, as well as sailings around Nordaustlandet, Edgeøya, and other beauty spots at Spitsbergen.

With the new regulations, crew and passengers are allowed to embark in Longyearbyen, but not disembark as long as there are more than 100 persons on board. If Ponant would sail Le Boréal to a port outside Norway, the two nearest alternatives would be Reykjavik on Iceland or Murmansk in Russia.

Another challenge for Ponant, which flies passengers in from Paris, is Norway’s quarantine regulations for people arriving from countries where the COVID-19 situation is unfavorable. France has had a negative trend lately and was by Norwegian health authorities on Thursday included on the “red list”. Ponant’s guests for Le Boréal could consequently not be allowed to fly into the ship via the airport in Longyearbyen without being quarantined.

Ponant has not replied to questions from The Barents Observer.

Following the next two-week Svalbard voyage, Le Boréal is scheduled for a 23-day expedition cruise along Russia’s Northeast Passage. This cruise starts in Longyearbyen on Svalbard where passengers have embarkation on August 28.

This itinerary doesn’t include any landings or sailings in Norwegian waters after departure from Longyearbyen and can take passengers as long as they arrive from countries defined as green by the Norwegian health authorities.

The Northeast Passage voyage’s first port call is Murmansk, scheduled for August 31, while the final arrival with disembarkation is Anadyr on the Chukotka Peninsula on September 19.

There is no updated information on Ponant’s web-portal about any challenges with the next departures, and the cruise liner’s Facebook page yesterday posted great photos of polar bears from Le Boréal’s current Svalbard voyage.