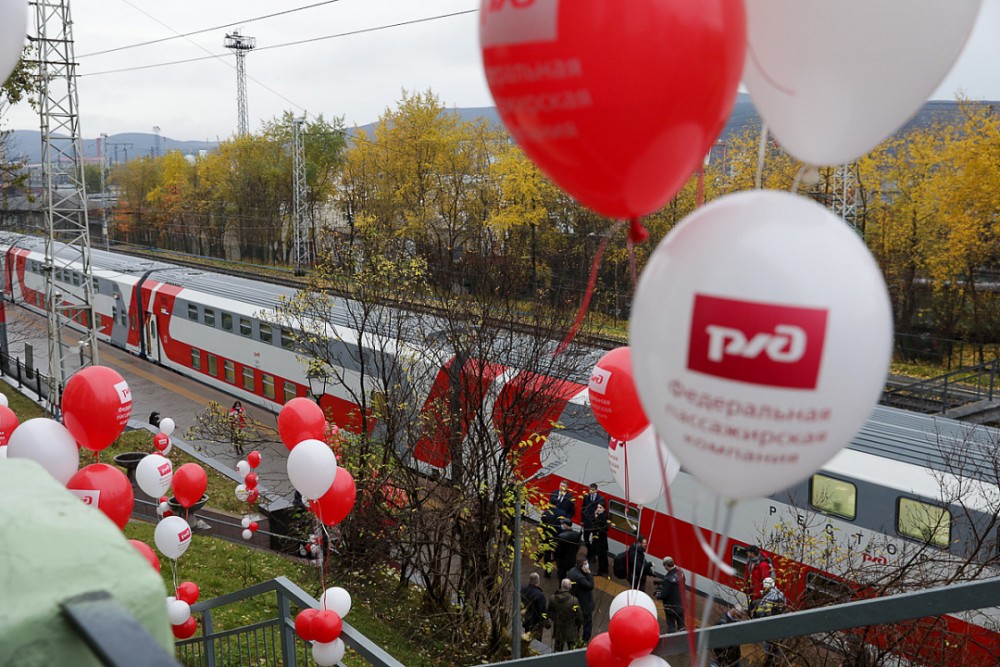 The first double-decker train left Murmansk towards St. Petersburg on October 12. hoto: Ministry of Information Policy of the Murmansk Region

Improved quality, service and capacity. The renovation program of Russian Railways has reached the northern capital of Murmansk.
Read in Russian | Читать по-русски
By

The first double-decker train leaving Murmansk for St. Petersburg on Monday was also the first passenger train to cross over the new railway bridge over the Kola River. The bridge is restored after the old collapsed during flooding this spring.

The event also marked the 105th anniversary of Murmansk railway station. Built mainly by labour-camp prisoners, the railway to the ice-free port in the north opened in 1916.

“This is another page in our systematic work to improve quality of long-distance trains,” said Oleg Belozerov, CEO and Chairman of the Management Board of Russian Railways.

St. Petersburg to Murmansk is the thirteenth route in Russia served by double-decker trains.

“This allows residents of the region and guests to the Arctic capital to travel north faster and more comfortably,” said Murmansk governor Andrey Chibis at the festivities on platform No. 1 minutes before the train had departure.

More than 600,000 passengers are annually traveling to and from Murmansk by train, of which the St. Petersburg route counts for 30%.

The train has 11 wagons with double or four-bed compartments, a restaurant wagon and seats for passengers with limited mobility. In total, the train can carry 602 passengers, which is one-third more than the standard single-deck train.

Murmansk is the third Arctic railway to be served by double-decker wagons, but the only to cross inside the Arctic Circle.

In Alaska, the double-decker train traveling between Anchorage and Fairbanks, uses the upper-deck as a dome for tourists to view the panorama. Finland’s northernmost railway station, Rovaniemi, is served by double-decker trains from both Helsinki and Turku.

A container from China arrives in Narvik. It could pave way for a new transport route