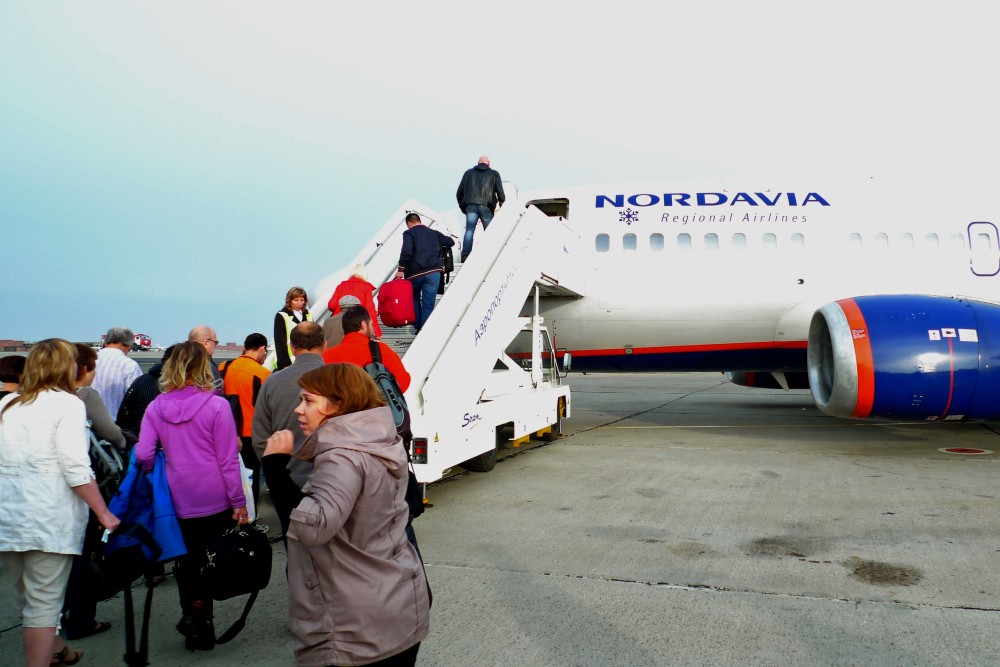 Today, people flying from Murmansk to Minsk have to go in transit via St. Petersburg or Moscow. Photo: Thomas Nilsen

Murmansk to get sanctions-free shopping flight to Minsk

Belarus is becoming a popular vacation destination for people from the Russian north as sanctions limit the possibilities to travel to Western neighbors.
Read in Russian | Читать по-русски
By

“We will jointly work to establish a direct flight between Minsk and Murmansk,” Governor Andrei Chibis wrote on Telegram after meeting Belarus Prime Minister Roman Golochenko earlier this week.

While most Western brands have left Russia, it is still possible to buy popular goods in Belarus. Russians need no visa to enter the country which is a close ally of the Kremlin.

Over 1,000 companies have curtailed operations in Russia since the invasion of Ukraine, according to Yale School of Management which is tracking the response of well over 1,200 Western companies.

“I remember going to Kirkenes to buy Levi’s in the early 90ties,” says Igor from Murmansk. Those days seem to come back now.

With the exception that cross-border travel to Norway or Finland has strict limitations. EU has imposed a number of export restrictions on Russia, including technology and luxury products with a value of more than €300 per item. It will also be harder and more expensive to get a Schengen visa.

The new iPhone 14 selling at a price of around €1,000 is one example of a product Russians can’t buy in Europe and bring home.

The iPhone, however, is already on pre-order sale by Russian mobile network MTS, Reuters reported. Delivery could take up to 120 days and could be canceled if difficult to import, the MTS said.

New ways of alternative import go both via Kazakhstan and Belarus.

“Tourists started going to Belarus more often and we also noticed that they are going shopping among other things, so we decided to offer this product,” a spokesperson for the FUN&SUN tour agency told the Moscow Times.

“Everything there is working, there are no sanctions,” Yelena Shitikova with Family Travel, a tour agency in Arkhangelsk said to the newspaper.

Another travel agency reports a 60% increase in bookings to Belarus.

With a new direct flight from Murmansk, the Belarusian capital is just over two hours away. Russian airlines are banned to fly to other European destinations and similar sanctions are imposed on most European airlines that previously operated routes to Russia.

Shopping, however, is not solely a reason for people from the north to run and buy tickets to a new direct flight to Minsk.

“Belarus is a beautiful and very nice country for vacation. Cheaper prices on everything compared with Murmansk, good weather in summer, a lot of interesting places to see and good food,” said Anna Kireeva, a journalist from Murmansk that visited the country this summer.

She told the Barents Observer that shopping can partly be a reason for going.

“Also, Minsk can be a transport hub to some other places, like Georgia,” Anna Kireeva said.

Belavia, the flag carrier of Belarus, operates routes to international destinations in Central Asia and the south Caucasus where Russian airlines are not flying in fear foreign governments are sizing their planes.

According to the northwest news online Expert, several thousand residents of Murmansk travel to Minsk annually on transit flights via St. Petersburg and Moscow.

Sanctioned Belarusian fertilisers to be exported from Murmansk