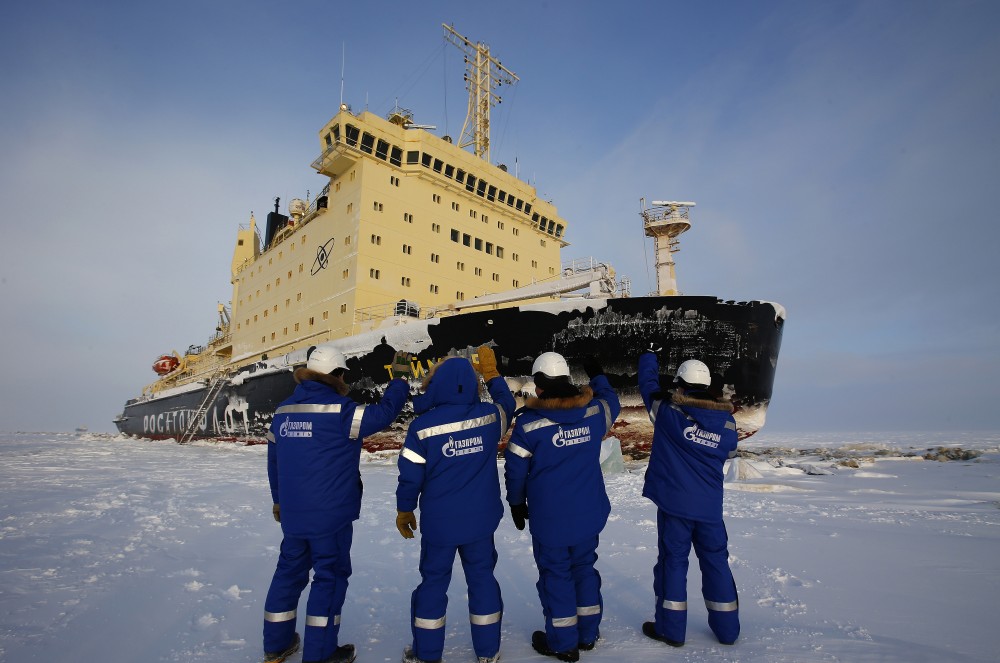 Two million tons of oil will be produced at the Novy Port field already in 2016. New icebreakers needed to crack the the thick Arctic ice. Photo: Gazprom-Neft.ru

Gazprom Neft launches construction of the ”Aleksandr Sannikov”, one of two icebreakers for the Novy Port field in Yamal.

In a ceremony at the Vyborg Yard today, the keel was laid at the icebreaker of the type Aker Arc130A, the latest of Russia’s new fleet of powerful Arctic vessels.

When handed over to Gazprom Neft in 2018, the ship will break ice in the shallow waters of the Ob Bay, opening the way for tankers shipping to and from Novy Port, the company’s infrastructure hub at Cape Kamenny in the Ob Bay.

The icebreakers have been designed by the Finnish company Aker Yards, a press release from Gazprom Neft informs.

In the ceremony, Vyborg Yard director Kirll Voroshilov underlined that the new ship ”is without analogues in the world”, the yard writes.

The Novy Port project is Gazprom Neft’s current biggest Arctic oil project. Already in 2016, the project will deliver two million tons of oil for exports. The shipments will be sent both westwards to EU markets and eastwards along the Northern Sea Route.

The construction of Russia’s new icebreaking vessels is all concentrated on yards located in and around St Petersburg. While the Baltiisky Yard is constructing the new generation nuclear-powered icebreakers, the Admiralty Yard and the Vyborg Yard produce diesel-engined vessels. Also the Yantar Yard in Kaliningrad has been involved in construction processes. In addition, the Russian-owned Arctech Yard in neighboring Finland is delivering icebreaking vessels for Russian stakeholders.

In addition to Gazprom Neft’s Novy Port icebreakers, also company Novatek is in the process of building icebreakers for the Ob Bay. In April this year, Rosatom signed a contract with the Vyborg Yard on the construction of a 10MW icebreaker which is to accompany tankers to and from Sabetta, Novatek’s LNG project in the area.