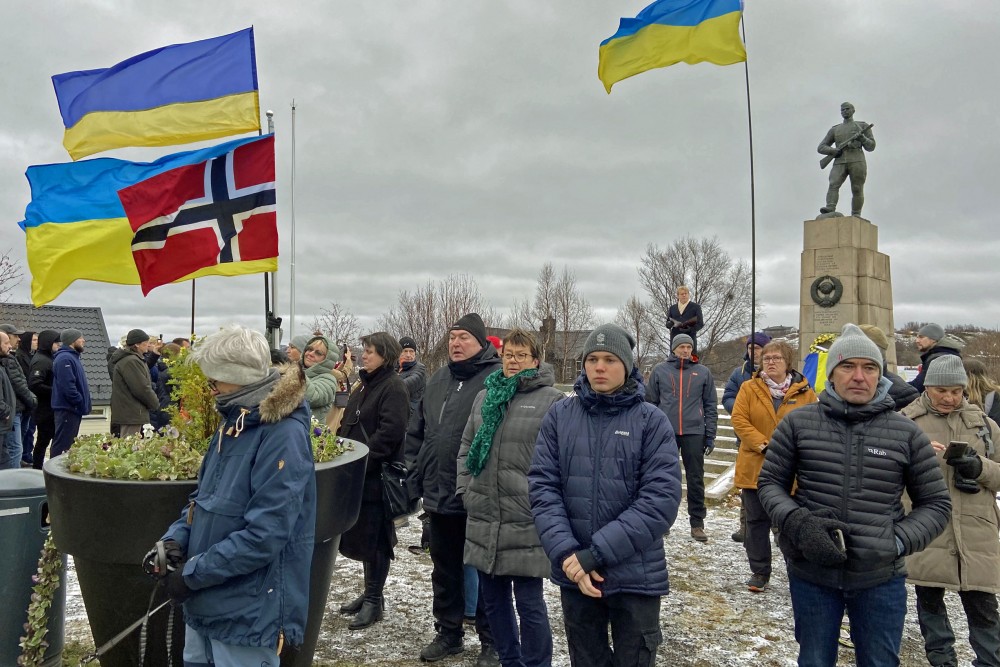 People turned their back to Russia's Consul General Nikolai Konygin as he gave his speech at the liberation monument in Kirkenes. Photo: Thomas Nilsen

Consul General Nikolai Konygin had invited to commemorate the Red Army’s liberation of Kirkenes. Environed by Ukrainian flags, the 78th anniversary became very different from previous ceremonies in the Norwegian border town.
By

Unlike anytime before, no Norwegian officials turned up when Moscow’s diplomats assembled compatriots by the local war memorial on Saturday.

The people that attended, though, were divided.

Locals from Kirkenes silently turned their back to consul Konygin as he gave his speech about how people stood together against fascism during the second world war.

The other half, including officials from the Russian border town Nikel, were facing the consul.

«People of the Soviet Union, together with Norwegian partisans, liberated East-Finnmark and started the liberation of northern Norway,» the consul said.

His wreaths, however, consisted of only the colors of Russia’s flag, the tricolor.

The first snow fell to the ground shortly before the ceremony started and a cold wind came in from the Barents Sea.

«In such conditions, in all weather, you need courage, bravery, and a strong will. It is something that is needed even today,» Konygin stated.

On October 18, 1944, Red Army troops attacked the Nazi-German frontier along the border with Norway. The first officer to cross the border was said to be a Ukrainian. A few days later, on the 25th, Kirkenes was liberated. Since then, the date is marked annually.

At the 75th anniversary, in 2019, Russia’s controversial Foreign Minister Sergei Lavrov laid wreaths before the monument. Lavrov did so side-by-side with Norway’s foreign minister. Like he did at a similar anniversary at the Kirkenes memorial in 2014.

This year, it was the current war in Europe that got attention. Not by the Russian consul, but by the crowd of local Norwegians, Russians and Ukrainians that turned their back on him.

They had already placed wreaths in front of the soldier monument before the Russian diplomats came. «To our Ukrainian heroes from 1944 and 2022,» a note read, circled by blue and yellow flowers.

«Russian diplomats should stay away from this monument until they end their bloody war on Ukraine,» said Harald Sunde, a local historian that has published several books about the Norwegian partisans“ heroic efforts along occupied Norway’s northern coast.

Anton Kalinin, originally from Russia but living in Kirkenes for more than 20 years, recently painted his car in yellow and blue. When the Russian diplomatic delegation came to the monument, he turned on the well-known Ukrainian song NOT YOUR WAR by Svyatoslav Vakarchuk from the car’s speakers.

«There is a war in the middle of Europe and Russia is the aggressor,» Kalinin said.

Anton Kalinin’s highly visible car protest hasn’t been welcomed by everyone in the Norwegian border town that for the last three decades has developed close ties with its Russian neighbors. A few weeks ago, both wing mirrors got smashed off by unknown attackers a late weekend night.

After laying his tricolor wreaths next to the Ukrainian flag and flowers, Consul General Nikolai Konygin looked at the locals that just had turned their back on him.

The diplomat then said to the Barents Observer: «People are free to do what they want.»

Are people free to do what they want in Russia?

So, such a protest with Ukrainian flags and people turning their back to an official speech could happen in Murmansk or Nikel?

«That is difficult for me to say because I have never been to such an event in Nikel.»

But do you think people there could protest like this?