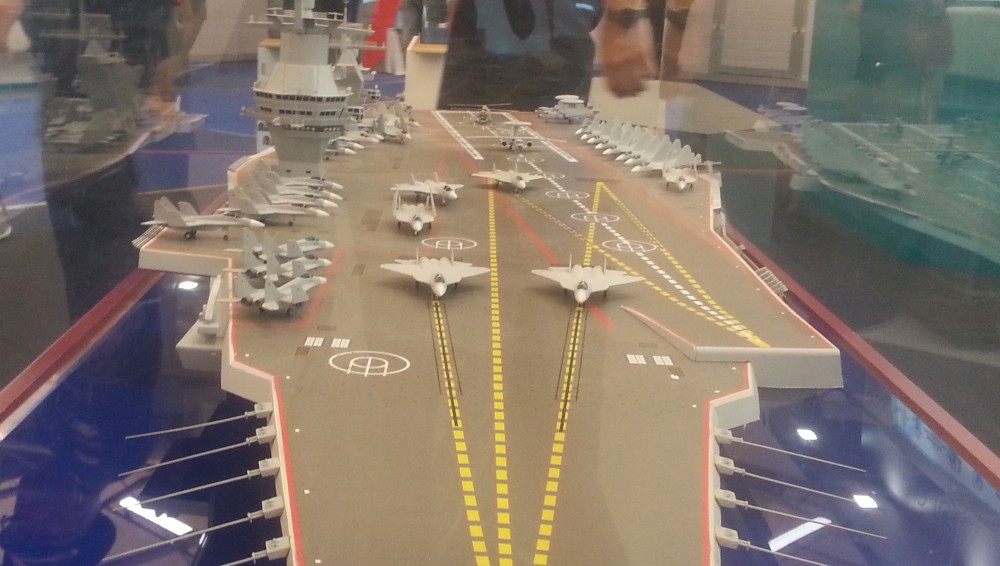 This vessel will be able to operate in the Arctic, ship designers from the Krylov Institute say. Photo. Artem Tkachev, Wikipedia

Russia’s projected aircraft carrier will be able to operate in Arctic waters, but might never be built.
By

The vessel model preliminary named ”Shtorm” (project 23000) will have ice-class standards and consequently be able to operate in the Russian Arctic. It will be capable to protect Russian strategic interests on the world seas, and also in Arctic waters, people connected with the Russian defence industry say.

The projected ship was first presented at an arms expo in St. Petersburg in 2013 and later also at the ”Armiya-2015” exhibition outside Moscow, Wikipedia informs.

The ”Shtorm” is designed by the Krylov State Research Center (KRSC).

According to IHS Jane’s, the ship is 300 meter in length, 40 meters wide and has a draft of 11 meters. It is designed with a conventional powered engine, which possibly could be replaced by a nuclear one.

However, the ”Shtorm” might never make it further than the planning table.  It was originally planned built and ready by year 2030, but the process appears in deadlock. Head of the Russian State United Shipbuilding Corporation Aleksey Rakhmanov confirms to Echo Moscow that no contracts have been signed over ship development.

The price tag of the ship is 350 billion rubles. That could be too much for an increasingly strained state budget.

Russia from before has one aircraft carrier, the 20-year old «Admiral Kuznetsov», which is based in Northern Fleet headquarters of Severomorsk.