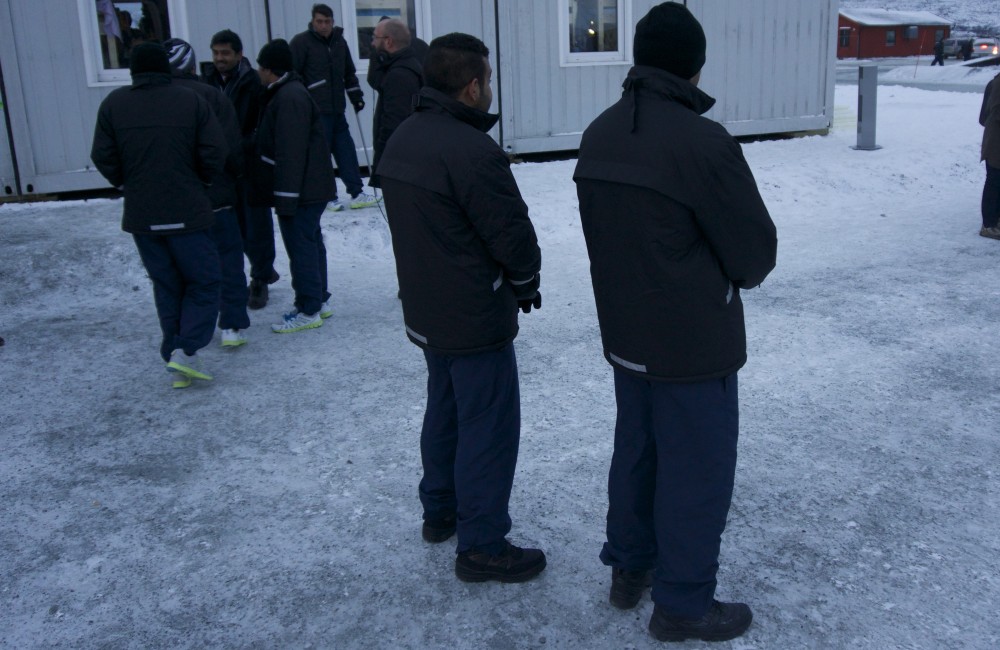 Refugees arriving to Schengen Europe via the so-called "Arctic Route" including Moscow and Murmansk. This photo for illustration is from the refugees arrival centre outside Kirkenes in Norway. Photo: Thomas Nilsen

Lapland Border Guard projects 7,500 asylum seekers or more this year as Finland is now the most attractive destination for asylum seekers among countries bordering Russia to the west.
By

210 asylum seekers came to Finnish Lapland from Russia’s Murmansk region the first 11 days of 2016. Finnish Border Guard now fear the numbers will rise during the year and estimates 7,500 or more asylum seekers to come to Raja-Jooseppi and Salla by year end.

After the Norwegian-Russian border at Storskog became practically closed for asylum-seekers in late November last year, the two Finnish checkpoints are now the northernmost gateway to Schengen-Europe.

“If the current numbers of 20 per day continue until the year end, it will arrive about 7,500 illegal immigrants from Russia per year,” a statement from the Lapland Border Guard District reads.

Interviewed by broadcaster Yle, Colonel Jari Tolppanen says it is difficult to make a reliable estimate.

“It is thought, though, that the economic difficulties Russia is experiencing could prod more migrant workers from Central Asia who have been living in Russia to head west,” Tolppanen says.

He says the Russian side regulate the number of asylum seekers and that not everyone gets past Russian border officials. It is FSB that is in charge of the border regime.

“According to information known to the Lapland Border Guard, the number of asylum seekers is regulated on the Russian side [of the border], but on what basis that is done, I’m unable to says,” Jari Tolppanen says to Yle.

The statement from the Border Guard posted on Tuesday says organized crime elements facilitate for the illegal migration to Finland from the home countries of the asylum seekers, in the country of transit [Russia] as well as in Finland.

Migrants pay organizers tens of thousands of dollars for the trip to Finland, the statement says.

Crime Prevention Officer Jarmo Juujärvi with the Border Guard says to Yle that many of the asylum seekers crossing the border to northern Finland have paid around $10,000 for a full package travel service.

“For example, an Afghan family pays organizers in advance for travel t Moscow and on to Murmansk. There are no other expenses along the way. They go to the place agreed upon and from there are directed to the next,” Juujärvi explains based on talks with newly arrived asylum seekers.

Until Christmas, the asylum seekers crossed the border with bicycles since Russia’s border regulations forbid walking. Then, Finland introduced a ban on bicycling in the winter. As a result, migrants are today crossing the border with old Ladas and Volgas that are now piling p at Salla and Raja-Jooseppi checkpoints.