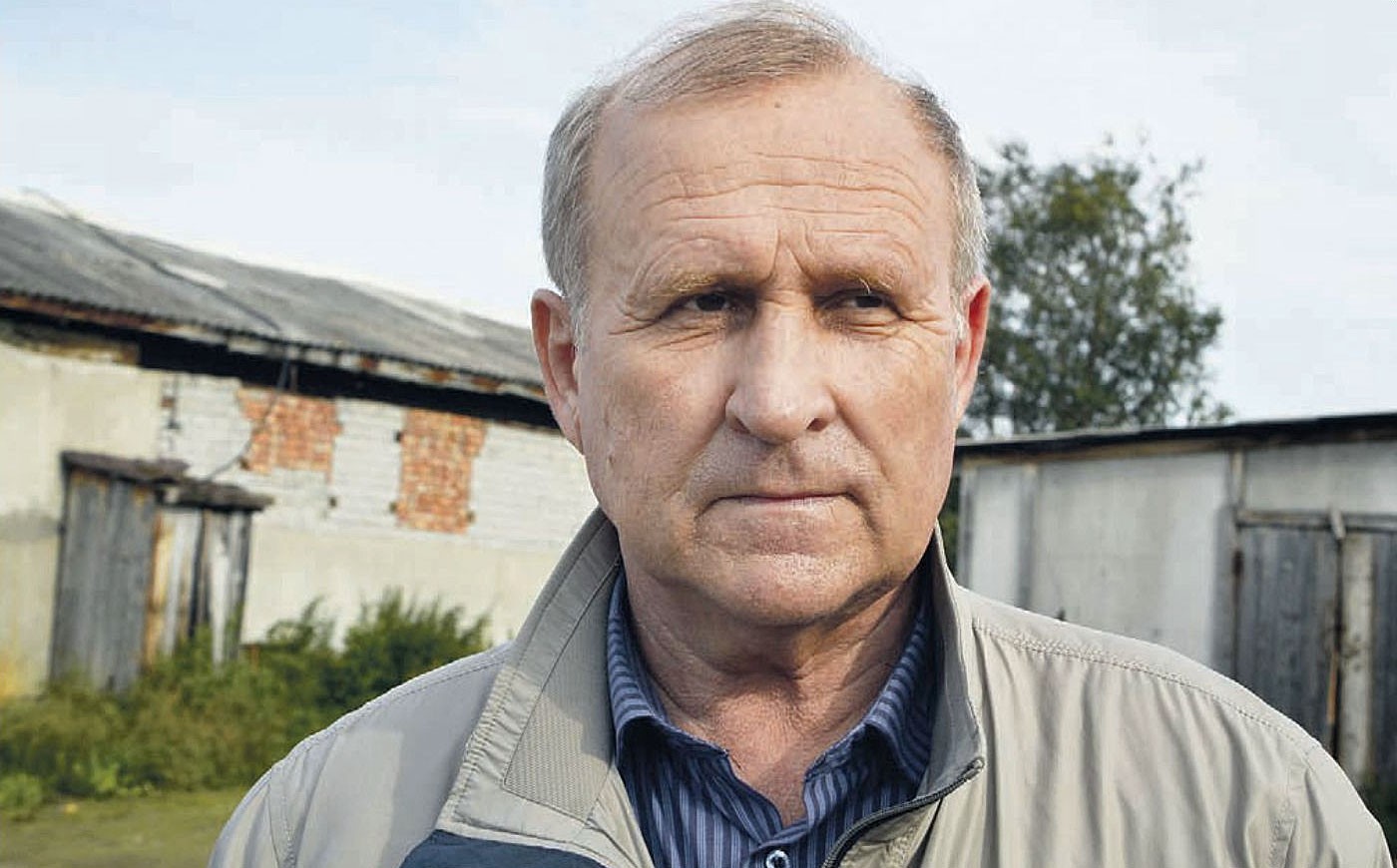 «Every evening I ask God to just take me already. Please!» Alexander Gladyshev says as we drive along the pits and bumps of the rural roads of Kola District in an old minibus. «But in the morning I open my eyes and I am still here. And that’s all. The mood is spoiled because I am still here.»

Gladyshev leases his fields in the district but he has been working this land since 1988. But unfortunately, now almost nothing grows in these fields.  The land was spoiled 15 years ago when flood hit a storage facility at a nearby poultry farm and dozens of hectares were ruined by the contents. Gladyshev is still trying to restore the fields but for this labor, he has only been fined hundreds of thousands of rubles.

Agriculture in the far north is about the same as trying to grow apple trees on Mars. The fertile soil layer is meager and has to be repaired every few years. This means removing the topsoil and replacing it with a new one. The summers are very short, the winters are harsh, the electricity is expensive and the sun does not rise so high in the sky. It is no wonder that the agrarian sector in the Arctic collapsed along with the economy of the Soviet Union.

In the last ten years, the Murmansk region saw a pig farm, a poultry farm, a breeding facility and a hothouse complex all go bankrupt. And this has stopped the production of eggs and chicken meat in the district. And the Polarnaya Zvezda milk facility, which had received gold medals at international exhibitions for the quality of their milk, was suddenly re-registered 2,300 km to the south in Gudermes, Chechnya. After this, the local hands simply stopped feeding and milking.

The Russian agrarian sector is a constant recipient of multi-billion ruble subsidies from the regional budget. These subsidies, are often noted by Murmansk Accounting Chamber auditors as not having any real impact on the quality or efficiency of regional agricultural production. But nevertheless, in the past few years, the regional government has been focusing on farmers, at least in public speeches made by top officials.

«Yes, but how are the farmers doing in reality?» asks Gladyshev, who once delivered 300 tons of dill a year to Murmansk, who provided military units with potatoes and meat and saved the lands abandoned after the collapse of the state farms from desolation.

«I was first given these lands in winter. The snowdrifts were two meters high. We talked about how long it would take for the snow to melt and agreed that we could adjust the contract based on the state of the fields. Of course, when the spring came they did absolutely nothing.  So, I just let it go and agreed. Why? My mother worked in these fields. She started in 1946. Who could have guessed that 70 years later, I would be facing judgements for trying to restore the work she did and others have simply walked away from. And I know what I am doing. I have received offers from the Finns and the Germans. The Germans saw what I was doing here and what I was getting and they said I should go with them. If I could raise a harvest on such land, imagine what I could do with something better! But I refused.»

My mother worked in these fields. She started in 1946. Who could have guessed that 70 years later, I would be facing judgements for trying to restore the work she did and others have simply walked away from.

The land, leased by the leadership of the Kola District to the peasant farmer Gladyshev in 1998 was a garbage dump. The poultry farm planned to build a modern storage facility here. The idea was to mix waste material from the fertilizer and chickens with local peat. This did not pan out as the tractors could not handle the swampy soil and the project was abandoned.

«They brought me here and showed me this.» Gladyshev  continued, «I looked at it and asked them if this was all they had. They told me that for me, this was all they had to offer. So, I said what the hell and went to work cleaning the dump.  Well, cows and pigs need feed so we raised silage. We raised about 600 tons of it.  And here it is! It is right there in that pit. Nobody needs it. An agro-firm ordered it from us, we prepared the order but then they cancelled saying they did not need it anymore. We grew this hay for them. Look, you can see the stumps. But they bought alfalfa in the Tula region because it is more profitable for them. They did offer to take one ton from me but only offered 3000 rubles. Come on, is that the real price?”

And then in the spring of 2003, Gladyshev’s empire drowned in shit. This is meant in the literal sense.  That was the year the dam broke at the poultry storage facility and tons of guano poured into Gladishev’s fields.

It has been 15 years but they are still trying to fix the hundredfold excess of poisonous substance in the soil chemically. Gladishev did not receive any compensation by the way because the poultry farm simply went bankrupt.

So, what could he do? He called in land reclamation specialists and began to dig it all up, the goal being to remove the peat layer, fill it with sand and start again on the new fertile layer. And this project was just getting started when Gladishev received notice of a 700 thousand ruble (about €8,500) fine for starting a re-cultivation project without having a permit to do so. The fertile layer is now destroyed.

«So this and 240 court deals is all I have for all of the years I have been working here. I win sometimes.»

Gladishev won the case in tax court where the government said he owed them almost 9 million rubles (€110,000) for loans received in 2008.

This story begins when the national «Agro-Industrial Complex Development Project» was launched. Gladyshev applied for a loan to purchase agricultural equipment. He would be the first farmer in the Murmansk region to buy a prefabricated hey bailer package. Now that loan, as promised on television, should have been given in three days but Gladyshev’s process went on for 14 months. That three day deal was only offered to those with 10% to put down. But when he finally received his 33 million (about 408 thousand euro), he signed the contract for the bailing equipment. But instead of sending the hey bailer, they sent him scrap metal. Well, this was not what he had ordered so the peasant farmer sent it back. And when the firm refused to return his money, he again headed to the courts but lost! The judge, with obviously little sense of irony, pointed out that the farmer had not read fine print included in the delivery contract stating that he had no right to refuse delivery of the goods.

In that case, the farmer complained to then-President Medvedev about having to repay a loan debt where the money had been lost in deals where merchants had intentionally bilked him precisely because a loophole in the law allowed merchants to bilk farmers.

After lodging the Medvedev complaint, the court confirmed that Gladyshev did not owe the state anything but for some reason, the court bailiffs still froze his accounts. When questioned about this, they simply said that the court’s decision had not reached them. He had to go back to the court where he was told he was free to sue the bailiffs.

«According to the rules at that time, I had no right to buy what I needed directly. I had to work an intermediary,» explains the farmer. «That’s why I turned to Medvedev. This law had to be changed to prevent manufacturing companies from intentionally bilking others. The official answer I got back was that judicial decisions could not be revoked. I did not ask them to revoke the decision, I just asked them to protect the other small farmers.»

The loan was only recently paid off.

There is not much left on Gladyshev’s farm but for a cowshed and pigsty. There is a sleepy three day old calf in one of the stalls. Earlier, the farm fed the region with pork. But in the spring, one of the regional meat-packing plants found some African swine fever in raw material imported from the Leningrad region and Gladishev’s farm was banned from selling pork products for 6 months.

«In the 90s, this happened as well, bandits demanded money from me. And they burned me 5 times,» Gladishev  waves his hand in the direction of the foundation of the old barn which burned down 9 years ago. «There was a 150 meter long shed there. It burned to the ground in 15 minutes. I ran in there to try and do something. There were 50 cows and 40 sows. All of them lost from the carbon monoxide. Then they came back again but I still refused to pay.  So, they broke my ribs and my nose. But while I could still speak, I kept repeating that it would be better to just kill me because I was never going to give them a damned thing. So, they left me there but the farm was burned.»

By the end of the year, Gladishev is expecting a visit by the police officers. Several years ago, the district unilaterally doubled the rental rate for the farm because he had received the fields as a private citizen and only after changed the status to a business. But there is nothing to pay them with. The neighboring farm was given to a local ethnic Cossack for free.  This is one of the privileges granted under a new law for Cossacks, those descended from former cavalry soldiers and horsemen. The Cossacks are given grants, subsidies and land. Anyone can sign up as a Cossack, you just have to want to you. You do not have to provide any particular proof of lineage except to be willing to work during the harvest or ride a horse at a gallup.

«The only thing I have left is the language of the peasant worker,» says Gladyshev, «Why do these bastards get land for free? I’ve been a peasant my whole life on earth. My people go back five generations but I get no such rights.”

Now he has only one milkmaid helping on the farm. Sometimes he hires locals from a neighboring village for seasonal work. When times are absolutely bad, he pays them with milk, meat and potatoes. And this is what he lives on himself.

«My grandfather lived and died wearing these same clothes. And mine are already worn out.» Gladishev looks around at his land and sighs, «So, they say that agriculture in the north is unprofitable. But this is not really the truth. It is possible. I know this. It’s in my head that it is possible. But at least it is still mine. And it is earned and not stolen. And you know, one time they even wanted to give me some kind of medal, like for heroism. But I refused it. I didn’t want to go to Moscow. These bastards have broken everything. Did they really think I’d wear their damned medal?»