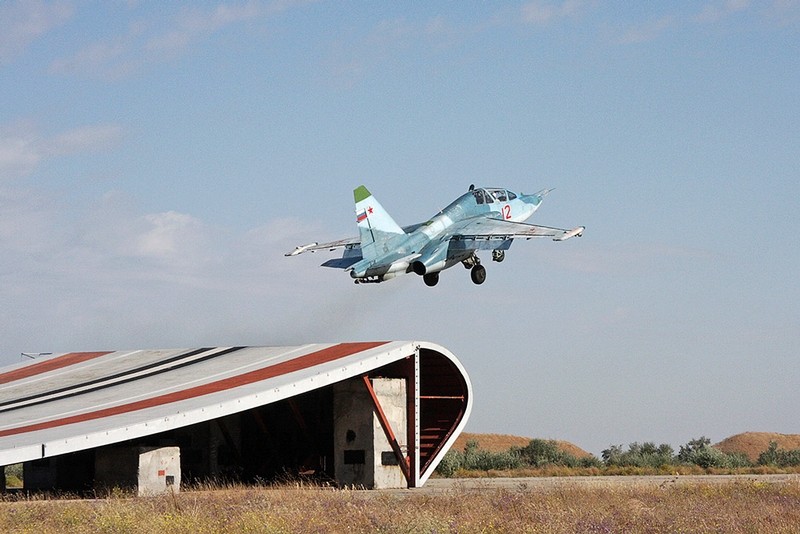 Russian aircraft taking off from the Nitka carrier simulator. Photo from englishrussia.com

Planes from Air Wing Kuznetsov have arrived in Crimea for training on Nitka, Russia’s only training facility for aircraft carrier pilots.
By

Naval pilots from Russia’s only aircraft carrier, the Northern Fleet’s “Admiral Kuznetsov” will be training take-off and landing at the Nitka training range at the Novofedorivka airbase on Crimea for the next month, the Ministry of Defense’s website reads.

Crews of both Su-33 and Su-25UTG airplanes are taking part in the drills.

The airbase and the training range – modeled after the deck of “Admiral Kuznetsov” – was owned by Ukraine since the collapse of the USSR. An intergovernmental agreement for using the training range was signed by Russia and Ukraine in February 1997 and in the following years it was regularly used by pilots from the Northern Fleet. Russia has been planning to build its own training facility since 2009, but construction never started. Ukraine has tried to get China and India to rent the range, but without much success, and last year Ukraine announced that it was planning to disband the whole complex.

When Russia annexed Crimea in March 2014, the training range was taken over by the Russian Armed Forces.

Pilots from the Northern Fleet trained at Nitka during the summer of 2014. Before that, there had been no Russian training operations there for four years, possibly because of the high rent, which in 2011 was estimated to $700,000.