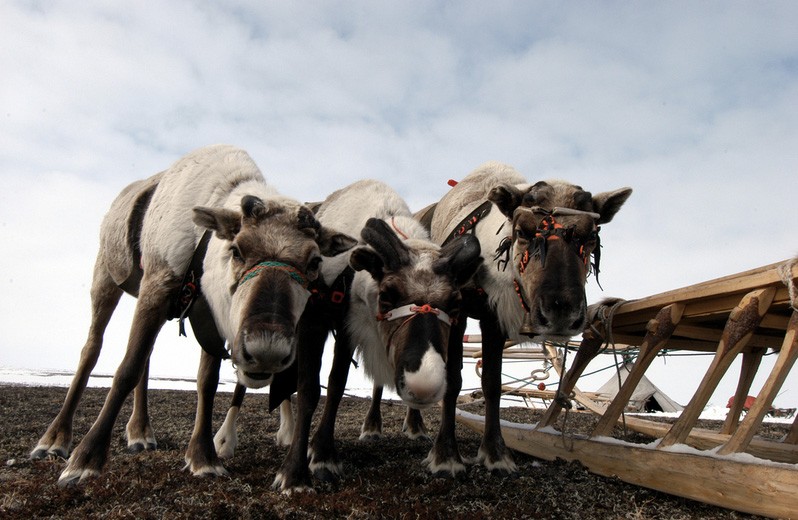 The Kolguyev reindeers are believed to have starved to death en-masse. Photo: Thomas Nilsen

In less than three years, the number of animals on the island of Kolguyev dropped from more than 12,000 to only 153.
By

The 3,500 square kilometer big island in the Russian Arctic was until recently jammed with reindeer. Not so any more.

In 2012, the number of animals on Kolguyev was estimated to more than 12,000. Then, in 2013, the number dropped to about 9,000, regional authorities informed. And then, the herds appear to have completely collapsed.

According to chief veterinarian Aleksandr Antonov, there are today only 153 animals left. The once so rich herds have all vanished, some say because of mismanagement. Others argue that bad weather on the island is the reason. Ice rains have covered the pasturelands and resulted in starvation, Antonov says in a press release from the regional government.

Furthermore, there was over several years an uncontrolled growth in the number of animals resulting in major pressure on already over-exploited pasture lands. The maximum number of reindeer in Kolguyev should be no more than 5,000, regional authorities say.

Consequences are dramatic also for the local indigenous people. Reindeer constitute a key component for the livelihood of the local Nenets and Komi inhabitants.

About 400 people live on Kolguyev, of which about 250 work in the local oil industry, Wikipedia informs.

Veterinarian Antonov says to the regional government press service that 145 of the 153 remaining reindeer are females and that a group of males has now been taken from the mainland in a bid to restore the flock.

However, the revival of the local herds will take many years.

Although extreme, the situation for reindeer at Kolguyev might still not be unique. Also in other parts of the Russian Arctic the number of reindeer has significantly increased over the last years. Also the Kanin Peninsula on the nearby mainland is believed to experience major over-population, newspaper Rossiiskaya Gazeta reports.

There is no control mechanism over the reindeer flocks, leader of the local Zapolyarie reindeer collective Mikhail Kislyakov says to the newspaper. He adds that private owners of reindeers over a number of years have boosted their herds.

Figures from 2013 show that the Nenets Autonomous Okrug, the region of which Kolguyev is part, in 2013 had about 180 thousand reindeer. In the neighboring Yamal-Nenets Okrug the numbers are believed to be several times higher.

Also in the Nordic countries, the number of reindeer have increased over many years, adding pressure on the pasture lands. According to figures assembled by Patchwork Barents, a regional data base, the number of animals in the northernmost Norwegian region of Finnmark increase has increased from 100,000 to more than 180,000 in the period 2001-2012.