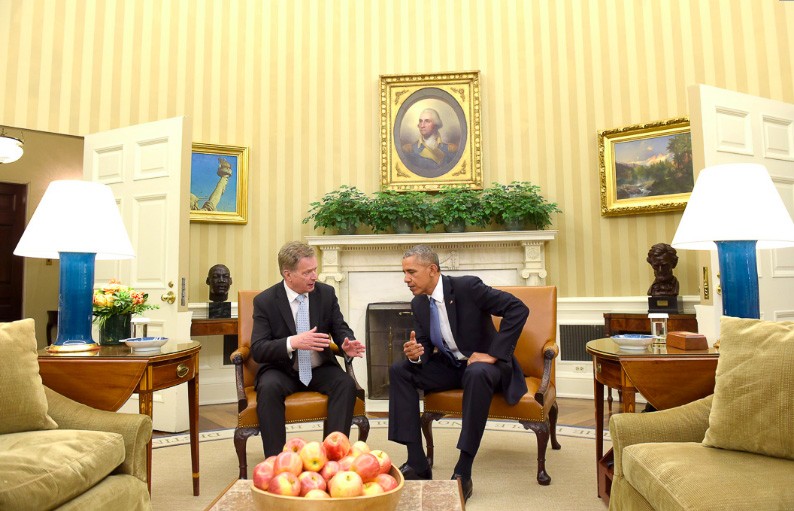 Bilateral talks between Niinistö and Obama as part of the U.S.-Nordic Leaders Summit. Photo: presidentti.fi

The international situation is not appropriate for an Arctic Summit to be held as part of Finland’s upcoming chair in the Arctic Council, President Sauli Niinistö tells Barrack Obama.
By

Finland, which in 2017 takes over the chair in the Council, has decided to abandon plans for an Arctic summit as part of its chairmanship period.

«President Niinistö referred to an idea he has previously raised for a possible summit in Finland during the country’s chairmanship of the Arctic Council. However, the President said that this would require a more peaceful global situation», a press release from the Finnish President’s office reads.

The Arctic was high on the agenda in Friday’s bilateral meeting between Niinistö and Obama. «There is an extreme fragility of the Arctic environment and a need for great care», Niinistö said. The U.S today holds the Arctic Council chair.

The meeting was held as part of the U.S.-Nordic Leaders Summit, an event which had a high focus on security, climate change and the Arctic.

In the bilateral meeting with the U.S president, Niinistö also touched upon relations with Russia. «There was a consensus on the need for dialogue, the need to bring Russia back within the ambit of the international system through talks,» the Finnish President said after the meeting.

In his opening remarks at the U.S.-Nordic Summit, Niinistö referred to an increasingly tense security situation in Northern Europe.

“Times are turbulent in many respects.  Security threats abound.  The situation has become more tense even in the Baltic Sea region and Northern Europe – our neck of the woods. Strengthening security and stability there is called for, and this includes appropriate dialogue with Russia to enhance transparency and reduce risk”.

Likewise, the Joint Statement from the summit underlines that “The United States and the Nordic countries are concerned by Russia’s growing military presence in the Baltic Sea region, its nuclear posturing, its undeclared exercises, and the provocative actions taken by Russian aircraft and naval vessels”.

In Solberg’s talks with Obama, a stress on Arctic cooperation