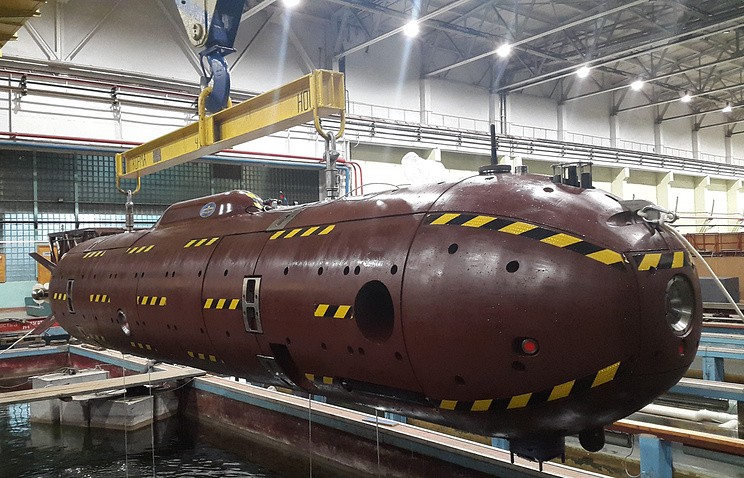 This is Russia's new UAV, code-named Klavesin-2R-PM. The photo is taken at the test water-pools in St. Petersburg. Photo: Rubin Design Bureau

A series of unmanned underwater vehicles (UAV) for both research and military purposes are under development.
By

Also other drones are listed in the report:

Rubin, a subsidiary of the United Shipbuilding Corporation, is one of Russia’s three design bureaus for military submarines and has well-known ballistic missile carriers like Yankee-, Delta- and Typhoon in its records.

Two units of Klavesin-2R-PM are to be built in St. Petersburg, TASS reported in June. Speaking with the news agency, Rubin Director Igor Villeneuve says the new drone has “increased autonomy and depth in addition to surveillance and search functions.”

Klavesin-2R-PM can dive to 6,000 metres and is intended for research.

According to information posted at a Livejournal blog site discussing Russian military news, the new underwater drone is 6,5 m long, 1 metre diameter, has a weight f 3,7 tons and a maximum cruising range of 50 km from its mother vessel. In contradiction to other sources, the blog post claims the maximum diving depth is about 2,000 m.

The predecessor of the new drone has been diving to the Arctic seabed on several locations helping researchers gather evidence that the Lomonosov Ridge across the North Pole is a continuation of the Russian shelf.

In addition to geological research, underwater drones are used for military intelligence, although information about such sailings in Arctic waters is rare to find in open sources.

It is, however, no secret that the Russian Navy has big plans for developing unmanned submarines.

… “an important difference between the new generation will be extensive use of unmanned underwater vehicles,” Vilnitom said talking about the future generations military submarines.