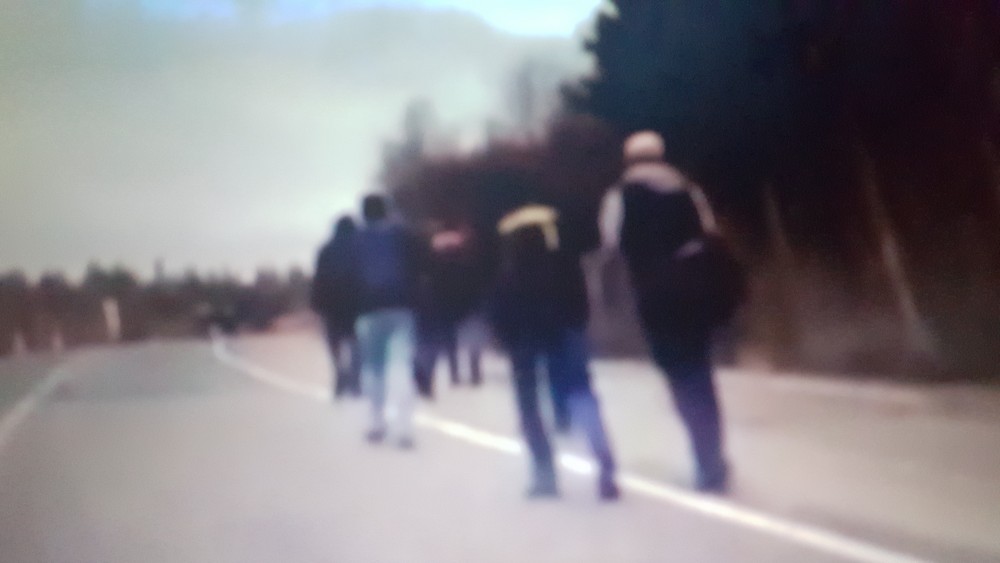 Around 80 people had Monday evening started to walk towards the Norwegian border. Screenshot from the video by Konstantin Zinyakov.

Teenagers, adults, parents with children. Some on bikes, but most are walking. It is below zero Celsius as the crowds of refugees are heading towards Russia’s border to Norway.
Text:

The Independent Barents Observer has Monday evening spoken to sources saying there might be as many as 800 to 1,000 migrants in the area around Nikel, the town nearest to the Norwegian border on the Kola Peninsula.

“There are no more rooms for refugees in Nikel,” the source says.

A video posted by Konstantin Zinyakov, that the Independent Barents Observer has got permission to repost, shows some 80 people on the move towards Norway. There are some 30 kilometres from Nikel to Borisoglebsk, the Russian checkpoint where the road goes over to Norway.

See the video in the end of this article.

There are no houses or shelters along the road. Half way, the migrants will come to the checkpoint where FSB border guards normally don’t let anyone through unless they hold a valid Schengen visa or are citizens of a Schengen member state. Not so any more. Over the last few weeks, over 2,000 refugees and other migrants have crossed the border to Norway from the Russian north. Most are from Syria, but according to NRK Finnmark, there are people from 21 different countries that have entred Norway from Russia in the north the last few months.

The checkpoint is, however, closed during the night.

The border opens again at 9 am Moscow time. The video shows that the people on the move don’t have gear or clothes for staying outdoor during the night in temperatures below zero Celsius.

There are no other ways to cross the border between Norway and Russia except for the checkpoint. The rest of the 196 kilometres long border is closed off with a barbed wire fence. FSB has special border patrolling forces. Video cameras and alarm systems are installed all the way.

On the Norwegian side of the border, at Storskog checkpoint, immigration police officers follow the situation from hour to hour. Tents are put up outside the checkpoint building to house the wave of migrants that don’t have visa and ask for asylum in Norway. Tents are used for shelter while waiting and during paper registration process.

The refugee crisis on the Russian-Norwegian border is developing into a serious challenge as the polar night and winter is approaching.