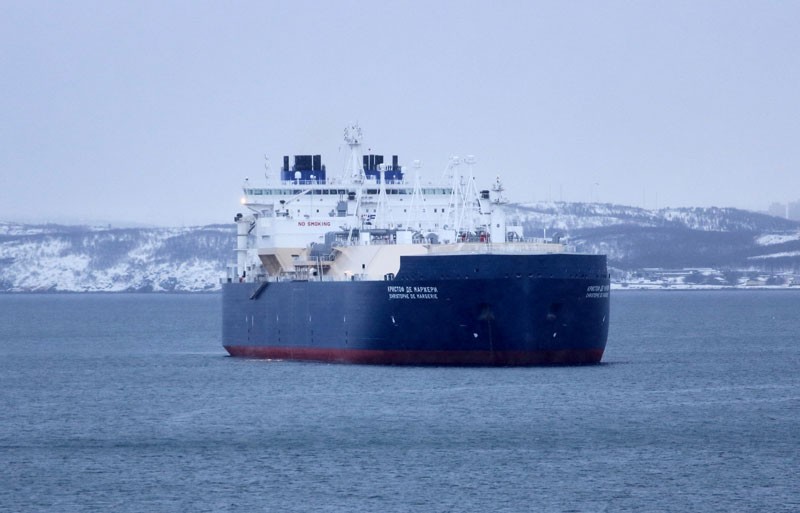 Loaded with liquified gas from Norway’s Snøhvit field, the «Christophe de Margerie» is making it unescorted across the Northern Sea Route to South Korea.
Read in Russian | Читать по-русски
By

It is the first commercial voyage of the unique vessel, originally built for company Novatek and its grand Yamal LNG project. The «Christophe de Margerie» one of the last days of July loaded LNG at Statoil’s Melkøya gas terminal on the Norwegian Barents Sea coast and set course eastwards.

On 1 August the ship entered the Kara Sea on its way to South Korea, Yamal LNG informs. It will make it through the Northern Sea Route without icebreaker assistance, the company says. The voyage is expected to take 15 days.

Information from ship tracking service Marine Traffic shows that the tanker on Tuesday afternoon was making it through the straits separating the Bolshevik Island and the Russian mainland, the gate between the Kara Sea and the Laptev Sea.

The tanker sailed north of archipelago Novaya Zemlya. Information from the Russian Arctic and Antarctic Research Institute indicates that the ship encountered its first ice only in the eastern part of the Kara Sea. More complicated ice conditions will be met in the waters around the New Siberian Islands and the more eastern Wrangle Island.

The «Christophe de Margerie» is well fit for the voyage. It has ice-protection level Arc7 and is capable to autonomously break through 2,1 meter of ice.

According to shipping company Sovcomflot, the owner, the LNG tanker has an engine power of 45 MW, which is «comparable with a nuclear powered icebreaker».

It is the first in a fleet of 15 tankers of the kind built to serve the Yamal LNG. The ships can carry shiploads up to 172,600 cubic tons of liquified natural gas.

The brand new vessel is built by the Daewoo Shipbuilding Marine Engineering (DSME) in Korea, and designed for shipments to Sabetta, the new Russian port and LNG terminal in the Yamal Peninsula. It is operated by Sovcomflot and carries a Cyprian flag.

Only twice before has a tanker brought LNG from Norway to the Asian market through the Northern Sea Route. In late 2012, the tanker «Ob River» successfully sailed the route and delivered LNG to a terminal in Japan.

Once the Yamal LNG project comes into production, presumably late this year, the «Christophe de Margerie» will be busy with shipments from Yamal. When in full swing, the project operated by Novatek will produce an annual 16,5 million tons of liquified gas. The LNG will be shipped to buyers both in Europe and Asia, some of it along the Northern Sea Route.