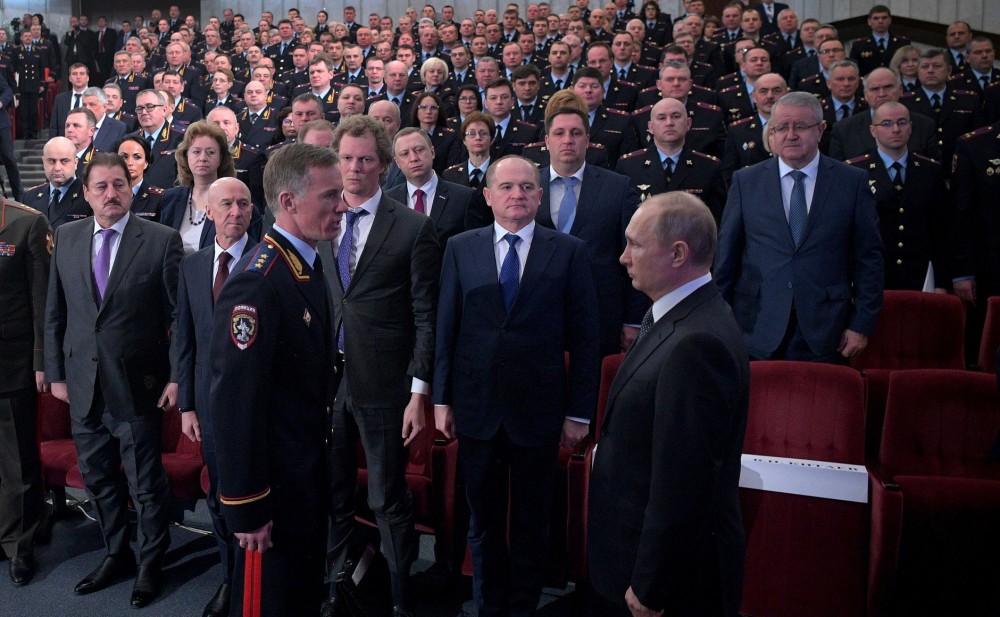 Any attempts to stir public disorder must be contained and educational institutions are a special priority, the president made clear in his recent meeting with the country’s Interior Ministry.
Read in Russian | Читать по-русски
By

«We must operationally react to any violation of public order in the streets, in public transportation, in sport and entertainment events», Putin told a conference hall packed of high-ranking Interior Ministry officials.

Putin made clear that young people must be a priority for the law enforcement officers and that teaching institutions should be objects of «permanent and special attention».

«We must do whatever we can to make the studies and life of our children calm and as much as possible limit violations», the president underlined and added that the authorities must efficiently react to any signals from teachers, parents and fellow pupils.

According to Putin, combat of extremism must be top priority and young people are the most vulnerable.

«We see that a number of groups are acting boldly and challengingly, they use social media networks to ignite national and religious intolerance, organize unsanctioned public rallies and seek to attract youth.»

Before the last presidential elections in 2012, Putin was confronted by mass demonstrations in downtown Moscow. Not so this year. But the president still appears worried about the conflict potential.

«Any illegal action aimed at dividing society and destabilize the situation is a serious threat,» he underlined.

«And it is your direct responsibility to operationally neutralize it», he added to his top law enforcement brass.

Putin also made clear that modern technology should be taken use of to handle irregularities. In addition, support can be requested also from voluntary public order squads, he said.

The president’s message is clearly aimed also at political opposition groups, among them Aleksey Navalny and his party. Navalny mobilized heavily all over the country but was ultimately deprived the right to run for the presidency.

The opposition politician and his supporters have repeatedly been arrested and become victims of attacks on numerous occasions during the campaign.

In Murmansk, the local Navalny office has ultimately been rejected the right to conduct public rallies and office leader Violetta Grudina has been accused of «extremism». Treatment from the police has been rough ever since followers of the presidential-hopeful opened the new Murmansk office on 31 July. Less than a week after the office opened seven activists were detained by law enforcement officers when they were distributing campaign newspapers and balloons.

In September 2017, Navalny paid a visit to Murmansk where is spoke to hundreds of supporters, most of them young people.

«People want a normal life,» Navalny said to the crowd. He continued with slashing out against the regime naming local administrations and Kremlin as «bunch of thieves.»

Ahead of the visit, school teachers on the request of the local government announced that students who planned to attend the rally would have to register on lists made by the FSB. “Better not attend this meeting if you are planning to continue your studies in higher government education,” the note said