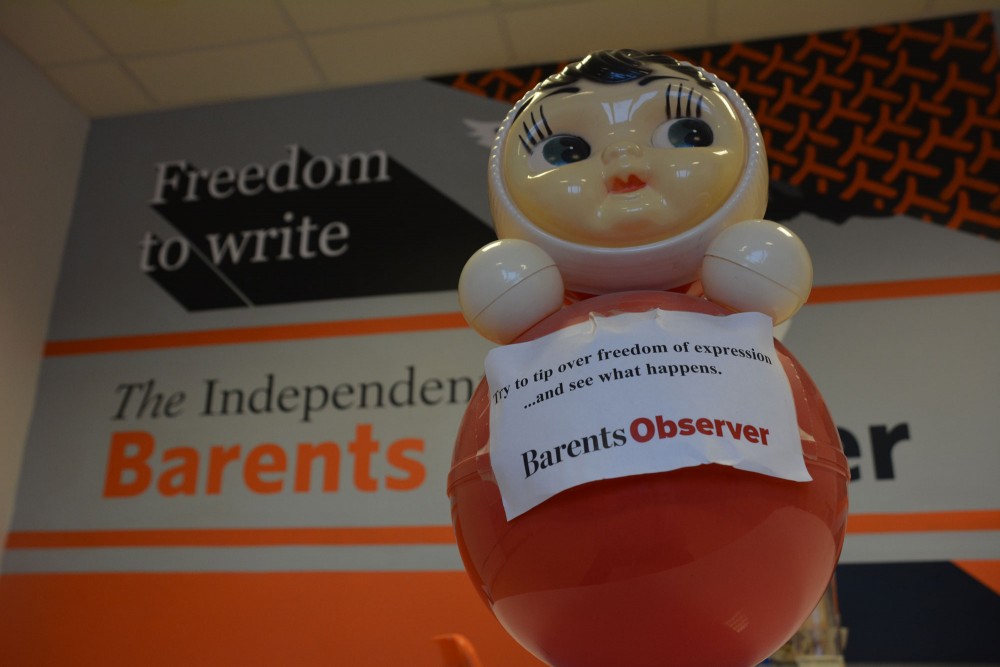 Obey restrictions imposed by media regulator Roskomnadzor or risk being blocked in Russia.
Read in Russian | Читать по-русски
By

You have 24 hours to unpublished this article, if not your newspaper will be put on the list of prohibited websites, Roskomnadzor wrote in the letter sent to the Barents Observer this week.

The Barents Observer has not complied.

The article about Dan Eriksson, the gay Sámi man from northern Sweden, remains unchanged and online and the future of the English-Russian language newspaper in Russia is suddenly unclear.

«Roskomnadzor, FSB, or any other authority be it in Russia or Norway, has absolutely no influence on our editorial freedom,» Editor Thomas Nilsen underlines. «It is out of question to unpublish the article,» he makes clear.

The Russian media regulator’s actions against the small Norwegian newspaper has stirred wide-range attention in Russia and Scandinavia.

«Russian taxpayers pay the salaries of officials in the Roskomnadzor so that they can keep an eye on Norwegian sites and demand that they remove certain articles. We truly have a rich country,» opposition political Aleksey Navalny ironically tweeted to his more than two million followers on Wednesday.

The remarkable attack on the online newspaper located in Kirkenes, Norway, has been covered by a big number of Russian news organizations, among them the Vedomosti, Novaya Gazeta, Interfax, Dozhd, Tsargrad and MediaZona. In Scandinavia, leading newspapers and state broadcasters have followed it up. The two north Swedish newspapers and journals Arjeplognytt and Samefolket have both printed also the disputed Russian translation of the story.

«As a sign of support for global press freedom, but also for Dan Eriksson and all other people’s right to define themselves, the Samefolket has decided to publish the Russian translation of the story,» Chief Editor of Samefolket Åsa Lindstrand says.

Over the last couple of years, the number of repressive actions from Russia’s state media regulator Roskomnadzor has been mounting and the targets are no longer only from Russia. Just few days before it sent the letter to the Barents Observer, it warned the BBC that it could face blockage in Russia following what it called «extremist contents» in one the broadcaster’s news reports.

A big number of Russian independent media organisations fight a practically constant battle against Roskomnadzor and move in and out of court rooms. In August 2018, the independent online journal 7x7 was fined an unprecedented 800.000 rubles and few weeks later the newspaper New Times was fined as much as 22 million rubles. Both media houses managed to cover the fines through crowdfunding and today continue independent reporting.

Roskomnadzor’s blocking of undesired websites is expanding and more than 330 thousand websites and webpages are now on the authority’s list of internet resources prohibited in Russia.

In December 2018, the media regulators blocked one of the websites of Aleksey Navalny and earlier the same year the MBK Today, a news site supported by Mikhail Khodorkovsky, was also blocked.

The Roskomnadzor’s most ambitious blockage attempt so far is with Telegram, the messenger service. Since its decision to block the popular provider in April 2018, a number of attempts to close it down have failed. Representatives of the media watchdog now say that they believe they will fully succeed shortly and that the Telegram will be unavailable in Russia early 2019.

The Russian media regulator has also warned Google that it could be blocked.

It has so far been almost impossible for Russian authorities to introduce bans on web services such as Telegram. However, that could change. Roskomnadzor is now reportedly investing big sums in technology that will make it able to easily block all the sites and services it wants.

Sources close to the Russian government have confirmed to the BBC that as much as 20 billion rubles now are being invested in so-called DPI (Deep Packet Inspection). The technology will enable the authorities to analyse internet traffic and pick out undesired contents, the BBC Russian Service informs.

The media control authority in December 2018 also adopted new regulations that enables it to block unwanted sites with unprecedented speed. Website owners now only have 24 hours to comply with the requirements of the regulators. Previously they had up to three days to comply.

Three days after it got the letter from the Roskomnadzor, the Barents Observer remains available in Russia. The story about Dan Eriksson is now one of the newspaper’s most read. And it is the Russian version that is the most popular.

Dan Eriksson himself is frustrated about the reactions from Russia.

«I was first speechless when I heard this, then I got angry», he says in an interview with newspaper Expressen.

«They say that I have incited people to commit suicide, but that is stupid - because it is the other way around. I want to help help people,» he underlines.

He is confident that the problem for the Russians is the fact that he is gay. He says the reactions from the Russian authority now gives him extra reason to continue to travel around, give lectures, and talk openly about homosexuality, prejudices and help people not commit suicide.