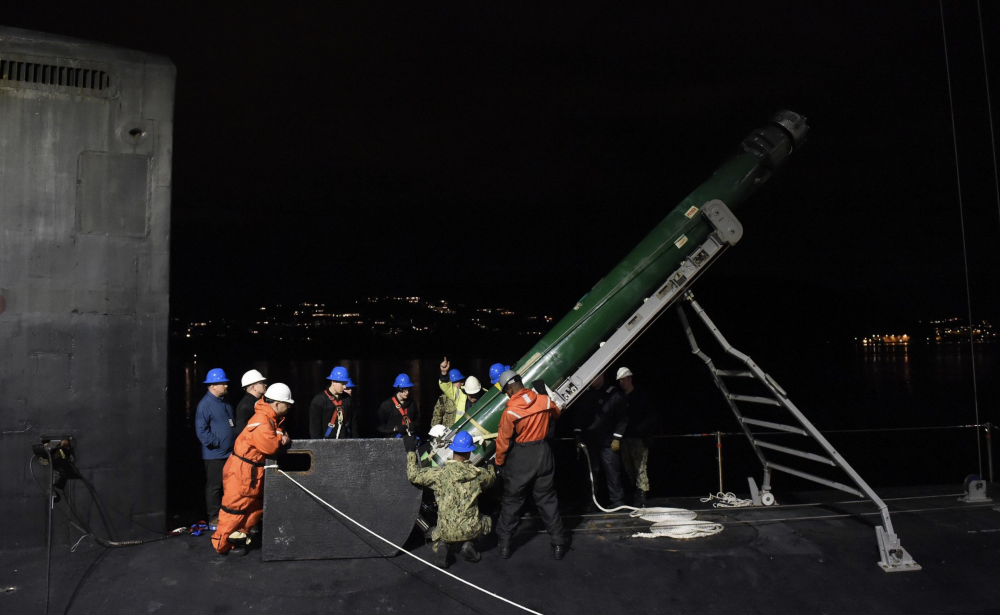 Loading of a torpedo onboard «USS Minnesota» at Haakonsvern naval base in Norway. Photo: U.S. Naval Forces Europe-Africa/U.S. 6th Fleet

«USS Minnesota» takes part in the ongoing cat-and-mouse game between NATO and Russian subs in the Norwegian Sea.
Read in Russian | Читать по-русски
By

The U.S. 6th Fleet on Thursday tweeted photos showing how a MK-48 Advanced Capability torpedo is loaded. The operation took place at Haakonsvern Naval Base outside Bergen on Norway’s west coast.

«…. many thought one US sub was tracking Russian activity. Not so fast! There were TWO (maybe more),» the tweet reads and points to «USS Florida» in the Mediterranean and the «USS Minnesota» in the North Atlantic.

It was in late October at least eight nuclear-powered submarines sailed out from their bases on the Kola Peninsula in maneuvers of a scale not seen since the days of the Cold War three decades ago.

The tweet from the U.S. Naval Force Europe, 6th Fleet, shows that NATO are not only tracking the current Russian submarine activities in the Norwegian- and Barents Sea with maritime patrol aircrafts out of Keflavik on Iceland and Andøya in northern Norway.

Each submarine comes at a cost of $2.8 billion and the «USS Minnesota» was commissioned in 2013.

The Barents Observer reported in 2018 that nuclear-powered NATO submarines were inshore Norway 3 to 4 times monthly.

Due to increased NATO submarine activities in the North Atlantic, including the Norwegian- and Barents Seas, Norway is no considering re-opening the port facilities at the former Olavsvern naval base outside Tromsø. The base was sold to private activities some years ago. Due to lack of sutiable port facilities in the north, Haakonsvern near Bergen are used also for visiting NATO submarines sailing to northern waters.