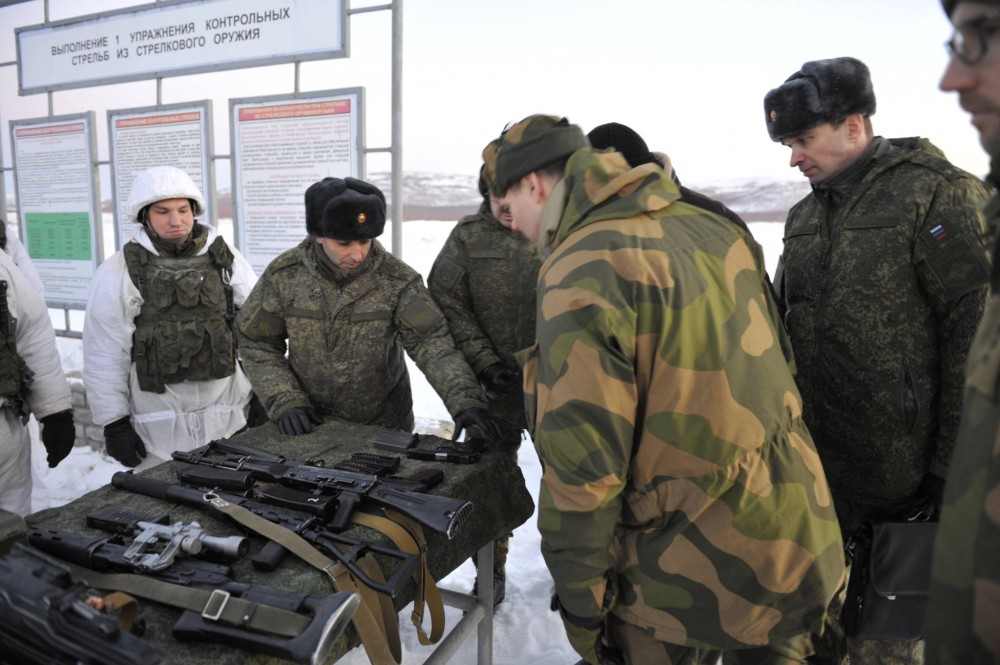 A Norwegian military inspector looking at the weapons at one of the shooting ranges of the Northern Fleet's 200th Separate Motor Rifle Brigade in Pechenga on the Kola Peninsula on December 7. Photo: Øivind Baardsen / Norwegian Armed Forces

"The prevailing policy of Washington is to destroy the previously reached agreements in the field of arms control," the Russian Foreign Ministry says in a statement on December 18 as the country is now formally out of the Open Skies Treaty.
Read in Russian | Читать по-русски
By

In May last year, then-President Donald Trump announced that the United States would be withdrawing from the Open Skies Treaty allegedly due to Russian violations. After a six-months agreed termination period, the U.S. was officially no longer a party to the treaty on November 22, 2020.

Moscow shortly afterward announced its intentions to follow the United States in withdrawing from the agreement that included 33 nations in Europe and North America. On Saturday, Russia’s Foreign Ministry said it is no longer a party to the Open Skies Treaty, that since it entered force in 2002 has enhanced mutual understanding and confidence by giving all participating countries access to conduct military observations from aircraft over each other’s territories.

“Decades of fruitful implementations of the Open Skies Treaty have shown that it served well as a tool for strengthening confidence and security, created additional opportunities for an objective and unbiased assessment of the military potentials and military activities of the participating nations,” the statement from Moscow says.

Russia was not the only country regretting that the United States pulled out last year.

Norway’s then-Foreign Minister, Ine Eriksen Søreide, said to the Barents Observer that her country was “disappointed by the US decision to withdraw from the Open Skies agreement.”

“The Open Skies Treaty is a crucial element of the confidence-building framework that was created over the past decades in order to improve transparency and security across the Euro-Atlantic area,” the statement said.

Over the years, Russian military observers have conducted many flights over Norwegian territory as part of the agreement, like in 2015 when one flight started out of Bardufoss airbase in northern Norway, an airport often used by NATO allies of Norway during winter training.

While such observation flights can’t be done anymore, Norway and Russia continue inspecting each other’s military forces in the northern regions under the Vienna document. The document is followed by all 57 member states to the Organization for Security and Co-operation in Europe (OSCE) and is also aimed at ensuring military transparency by exchanging information on their armed forces, military organizations, manpower and major weapons and equipment systems.

The exchanged information can later be confirmed by joint inspections.

Like now in December, when Norwegian officers visited the Northern Fleet’s 200th Separate Motor Rifle Brigade in Pechenga on the Kola Peninsula and Russian officers came to Norway’s Brigade North in Bardu and Målselv, mid-Troms region.

In Pechenga, the three visiting Norwegian officers were told about the structures and training of the Russian brigade.

“The leaders of the brigade could tell that they today have as many contracted soldiers, so-called kontraktniki, as they have conscripts,” says Major Leif Urke with the Arms Control Section of the Norwegian Armed Forces.

“Verification of information is the core of our arms control work. Dialogue and transparency help to stabilize relations between Norway and Russia,” Major Urke makes clear.

The Norwegian visit to Pechenga on the Kola Peninsula took place on December 7 and the Russian visit to Troms came a week later.

At Brigade North in Troms, the Russian delegation headed by Colonel Roman Petrov could cross-check that all information Norway has provided under the Vienna document was correct.

The Russians were shown the battalions at Setermoen, Skjold and Bardufoss and could have on-site talks with the personnel.