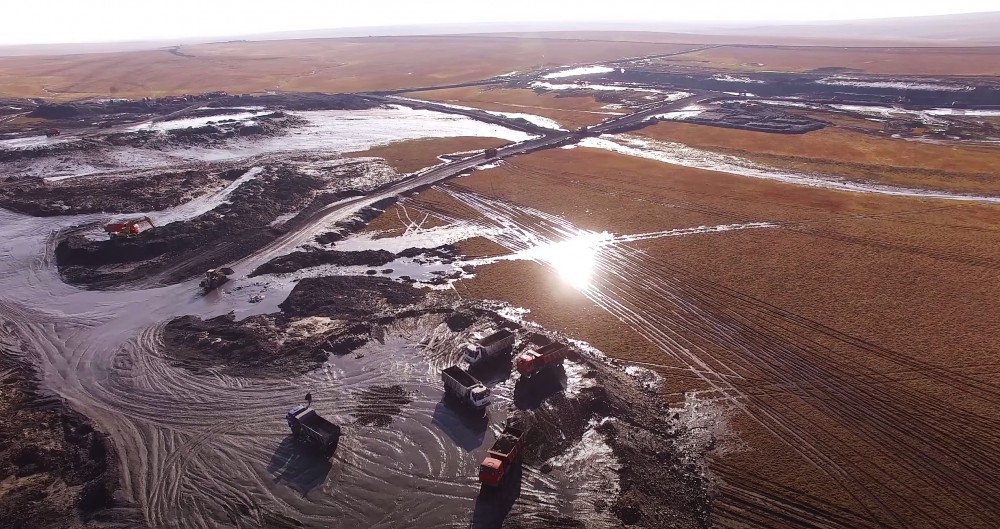 Digging on the Taymyr Peninsula. Screenshot of video

Russian Arctic coal is looking for way out of sanctions

The launch of coal mining at the far northern Taymyr Peninsula was to lead to a boost in exports through the Northern Sea Route. Now, mining company Severnaya Zvezda instead seeks new markets and ways to replace sanctioned technology.
Read in Russian | Читать по-русски
By

Businessman Roman Trotsenko has long had big plans for the vast coal resources of Taymyr, and over the years acquired a significant number of mining licenses in the area.

Trotsenko’s company Severnaya Zvezda says it intends to extract at least five million tons of high-quality coal per year at the Syradasaiskoye, the first mine in the area. A large open pit is under development and new infrastructure is being built.

However, the international sanctions imposed on Russia for its bloody war against Ukraine are now threatening to hamper project plans. In a statement, Severnaya Zvezda informs that it now considers to sell the coal on the domestic Russian market, instead of shipping it abroad.

“Under conditions with sanctions and blocking of goods in Europe we are looking at the possibility to sell up to 100 percent of the production on the Russian market […],” General Director Stalbek Mishakov explained in April this year.

He argues that there is a high demand for the coal both in domestic Russia and in alternative export markets.

Among the available foreign markets is China where companies might be interested in buying the Russian Arctic coal already in 2023, Mishakov said. The company is also negotiating with Turkey, India, Vietnam and Brasil.

According to the company leader, the Syradasayskoye project will proceed in line with original time schedules. “We will not give up our plans for the development of the project and start industrial extraction of coal this year,” he underlined.

The Severnaya Zvezda now looks at the possible acquisition of mining equipment and machinery from alternative manufacturers in Russia and China.

Meanwhile, construction works continue on the far northern tundra. All through summer of 2022, ships have shuttled to the site of the new project sea terminal.

Since the first cargo ship docked along the coast of the Yenisey Bay in early spring 2021, desolate stretches of tundra lands have turned into a construction site. A 60 km long road now leads to the Syradasayskoye area where a processing plant is to be built, and on the coast of the remote bay is emerging a terminal that ultimately is to be able to handle 100,000 ton deadweight ships.

According to Aleksandr Uss, the Governor of the Krasnoyarsk region, the first coal shipment from the area took place on the 4th of October.

The shipment has not yet been confirmed by Severnaya Zvezda.

Shipping in the waters around the Taymyr Peninsula is highly challenging as sea-ice requires assistance from icebreakers.

Roman Trotsenko previously said that the project will need up to 30 ice-class vessels that can deliver the coal to foreign markets. The lion’s share of those ships are planned built abroad.

Critics have long seen the Syradasayskoye project as unrealistic because of the shrinking demand for coal in European countries. With the introduction of sanctions and the closure of the EU for Russian coal, the project appears even less likely to develop as outlined by Roman Trotsenko and his Severnaya Zvezda.