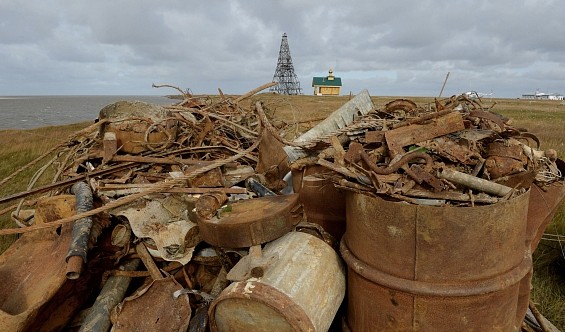 The USA have more than 10,000 fuel barrels left rusting at its abandoned Ikateq airfield in Greenland.
By

The Bluie East Two airbase was in operation only five years, from 1942 to 1947. Still, the U.S. Air Force managed to accumulate rubble in abundance.

Vehicles, asbestos laced structures, and well over 10,000 fuel barrels, many of which are still filled, is scattered over the area, Ken Bower says.

Bower, a fine art photographer from New York, has been on site and this year started a petition for a clean-up of the area.

«The base remains an environmental problem which should be cleaned up. The “Army’s Environmental Restoration Program” is a program to clean up active and old bases. There have been discussions in the past regarding a clean up, but nothing has been done to date to remove the debris and fuel barrels», he says in the petition.

So far, more than 34,000 people have put their signatures under the call.

Both the USA and USSR in the cold war period invested heavily in Arctic infrastructure and had little thought for local environment. In today’s Russia, thousands of tons of scrap metal remain littered over big areas.

Before the country launched its Arctic clean-up program in 2012, there was as much as 90,000 tons of scrap metal on Franz Josef Land alone.

In a meeting with President Putin last week, Minister of Natural Resources Sergey Donskoy confirmed that the Alexandra Island, a part of the Franz Josef Land, is now swept clean of rusting scrap metal. The same is the case with the Bely Island. However, there is still plenty of rubble left. In Kotelny, the island in the New Siberian archipelago, there is believed to be more than 110,000 metal barrels still lying in the Arctic nature.