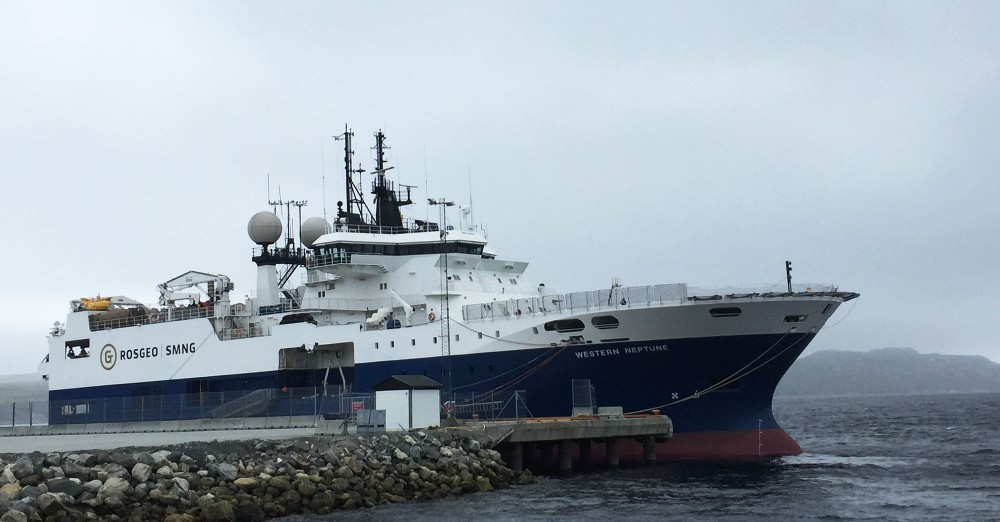 The "Western Neptun" was obtained by Rosgeo in 2017 and renamed "Akademik Primakov". It is today one of the company's key vessels for seismic studies in the Arctic. Photo: Atle Staalesen

Russian geological research ships are soon on their way to the Laptev Sea.
Read in Russian | Читать по-русски
By

They are among the most remote and least explored waters on the Russian shelf. And the oil and gas potential is believed to be significant. The so-called Taimyr-Severozemelsky area includes the waters north of Taymyr Peninsula and the ones surrounding archipelago Severnaya Zemlya. Ice lies thick though major parts of the year and shipping is considered risky. Not few ships have got stuck as they try to break through the ice of the Vilkitsky Strait, the waters separating the Kara Sea and Laptev Sea.

This is where state company Rosgeo now is getting ready to engage. The company recently signed a contract with a government agency on seismic surveying in a 40,000 square km area in the northwestern part of the Laptev Sea.

By the end of year 2020, Rosgeo is to conduct geophysical studies of the area, which subsequently will prepare the ground for further action.

As a result, a single array of geological and geophysical data will be formed and recommendations for further exploration will be developed, the company informs.

Hydrocarbon resources could be huge. Oil company Rosneft in 2017 drilled a well in the Khatanga Bay and said it believed the Laptev Sea could hold as much as 9,5 billion tons of geological reserves.

In a meeting in the Kremlin in June 2017, Rosneft leader Sechin brought with him a drill core sample from the Tsentralno-Olginskaya-1, and expressed high expectations from future activities.

«We can inform you, Vladimir Vladimirovich, that we, based on preliminary analysis, are about to open a very serious field», Sechin said as he handed the President the core sample.

Also Rosneft is conducting comprehensive seismic mapping in the region. In 2017, the company mapped about 1 million square km of Arctic waters. That is about 25 percent of the Russian Arctic waters considers prospective, the company informs. The character of 130 perspective structures was identified and ten new objects discovered.

The company now has 11 structures which are up for well drilling, Rosneft informs on its website.