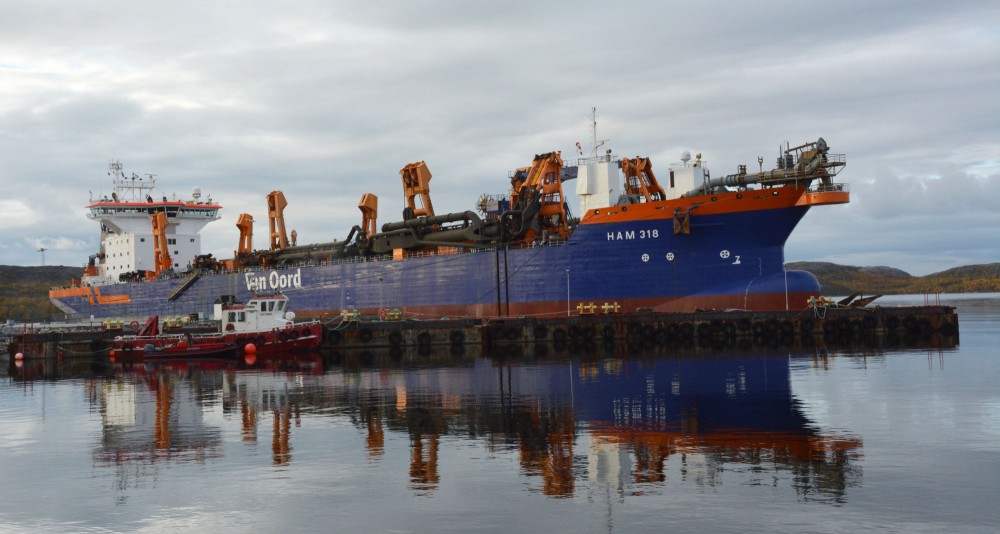 Dredger on its way to Gulf of Ob with stopover in Kirkenes, Norway. Photo: Atle Staalesen

More than 32 million cubic meters of sea bottom was removed from the Gulf of Ob this summer.
Read in Russian | Читать по-русски
By

It is state nuclear power company Rosatom and its subsidiary Hydrographical Company that is responsible for the major dredging operations that have unfolded in the far northern bay this summer.

In the course of 79 days, more than 32 million tons of sea bottom was removed by a fleet of dredgers, most of them from Belgium and the Netherlands. Operations will continue in 2021, and ultimately more than 100 million cubic meters of frozen seabed is to be dug up and removed.

The deeper waters of the Ob Bay will prepare the ground for shipments of large-tonnage vessels, including LNG carriers shuttling to the new terminal of Utrenneye.

When the dredging is completed in 2021, the width of the ship channel will be extended to 475 meters and up to 573 meter at a ship turning point. The length will be 51,6 km and the depth - 15,1 meters, Rosatom informs.

“The ship channel is made to provide year-round ship traffic needed for the development of hydrocarbon projects in the Ob Bay,” leader of Rosatom’s Northern Sea Route Directorate Vyacheslav Ruksha says in a comment.

The channel is of key importance for natural gas company Novatek and its development of the Arctic LNG 2 project. According to plans, up to nine LNG carriers are daily to shuttle up the ship channel to the terminals of Utrenneye and nearby Sabetta.

The dredging has a significant effect on marine environment in the area, and environmentalists fear that the far northern gulf ultimately will lose its unique Arctic fish stocks.