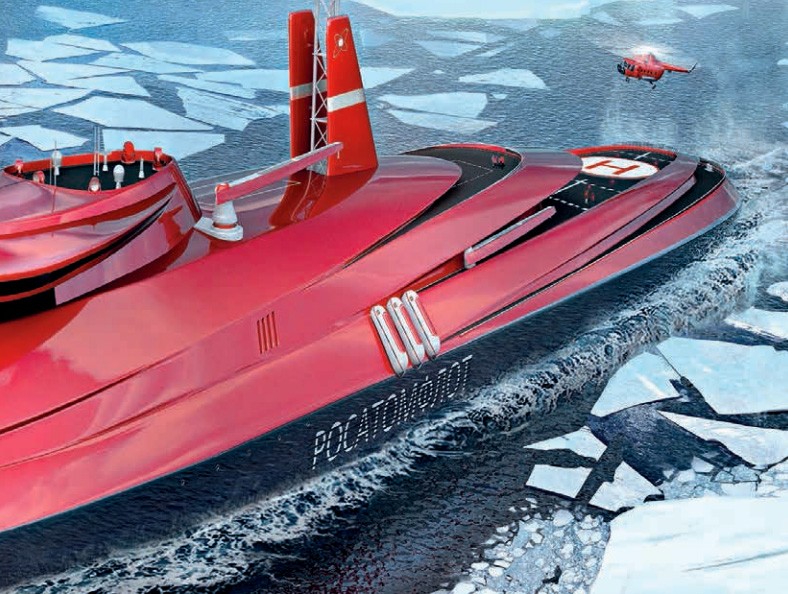 The new generation nuclear-powered icebreakers, the "Lider", might not get government funding, after all. Illustration: oaoosk.ru

Funding for activities under the new Russian Arctic Program will be cut by 75%, sources tell the news company.
Read in Russian | Читать по-русски
By

The new program, which originally was to include about 210 billion rubles (€3.36 billion) of investments, is likely to get to its disposal only 50.9 billion (€818 million), RBC reports.

Among the projects, which will be taken out of the program is the development of the new icebreaker - the «Lider». That alone accounts for an estimated 80 billion rubles.

Also security projects proposed by the Ministry of Interior will be taken out along with a project on lifting of nuclear objects sunken at sea, a source in the government confirms to the news company.

It is not clear to what extent the major proposed infrastructure projects will be affected by the cuts.

The original Arctic program draft included the building of eight so-called support zones, one in each of the federal subjects with Arctic coasts, for the development of the Northern Sea Route. It also included investments in new infrastructure, including the Northern Latitudinal Passage and Belkomur railway lines.

The decision to reduce program financing was reportedly made in connection with the recent government summit in Murmansk. During that meeting, Prime Minister Dmitry Medvedev also signaled that financing for the Murmansk Transport Hub is insufficient.

According to Transport Minister Maksim Sokolov, an additional 24 billion rubles are needed for the completion of the Murmansk railway line and that the project timeline might not be met unless a private-public partnership model is successfully applied.

The Russian State Arctic Program is developed by the Ministry of Economic Development and will cover the period until year 2025. A draft program was submitted to government on 1 February this year. A final decision on the document is expected to be made in an upcoming government meeting in June.