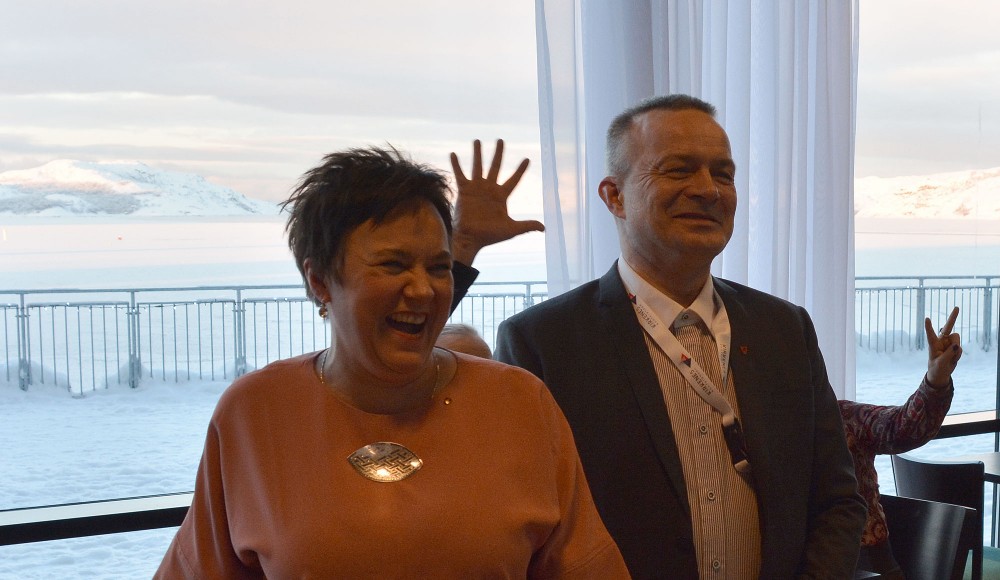 In the newly merged north Norwegian region, Ragnhild Vassvik and her administration will be in charge of climate, environment and high north policy.
Read in Russian | Читать по-русски
By

The county of Finnmark is junior partner in the merger deal with neighbouring Troms, and the regional government in Vadsø has strongly protested what it sees as a reform forced upon it by the government in Oslo.

However, the Vadsø administration and its political leader Ragnhild Vassvik might have more than enough reason to be content. In the deal signed on the 15th February, Finnmark gets responsibilities for several policy areas of key importance in Arctic governance.

Vassvik lost the battle for control over the new region’s political and administrative bodies, which will be placed in Tromsø. But international and high north policy, climate and environment is to be managed from Vadsø when the two regions merge in year 2020.

«These policy areas are absolutely central for the development of the High North and I believe it is a very good deal for Vadsø», Minister of Local Government Monica Mæland told the Barents Observer during last week’s Kirkenes Conference.

She does not exclude that new powers and jobs will be moved to the Arctic town.

The deal between Finnmark and Troms comes after hefty negotiations and waves of emotions.

Feelings have been running high, especially in Finnmark. The wide-stretched region with a population of only 75,000 is abundant in natural resources but is out-numbered by Troms in terms of people and human resources.

The deal between the two neighbouring counties was concluded after mounting pressure from the Oslo government and it was government-appointed arbitrary Knut Storberget who ultimately managed to strike the agreement.

None of the sides said they were happy about the result. But when the two top leaders of the regions took the stage in the Kirkenes Conference last week, they still seemed to express a feeling of relief.

“We did not want this merger, but I am ready to give this deal a chance and will not say that it is all based on empty promises”, Ragnhild Vassvik says to the Barents Observer.

“On the table is an increased regional responsibility in high north policies and we expect new tasks to be on the way.”

Vassvik has been criticized by fellow northerners for entering into the agreement. Critics argue that Finnmark will end up as the big loser and that the merger ultimately will deprive it of political power.

It remains unclear what exactly will be included in the new powers. A new joint commission is to go into the details.

Willy Ørnebakk, Troms County leader, argues that it was a major concession for Troms to let Vadsø get the management of climate and high north policy.

At the same time, he underlines that it is only the leading functions for the mentioned policy areas which will be placed in Vadsø. “We have management bodies for these policy areas also in Tromsø”, he explains to the Barents Observer.

Finnmark is the only Norwegian region with a border to Russia and cross-border relations with nearby Murmansk Oblast and other north Russian regions have been extensive over the last three decades.

The relationship with Russia is also a key component in the merger deal with Troms. The Finnmark government has long argued that it has an important role to play in building cooperation with the Russians and has warned against possible negative consequences from moving responsibilities to Tromsø. A county council statement from 2016 highlights the region’s important position in «safeguarding of national sovereignty and protection of the border».

«Finnmark is in a special position as the region bordering on Russia [and] the many years of cooperation and joint development with our neighbors in the east must be strengthened and further developed», the Council elaborated.

Ragnhild Vassvik later underlined that Finnmark’s special relationship with Russia «is a key argument in our opposition to the reform, and  also a key component in negotiations with Troms».

«The capital of the new merged region should be the town of Vadsø, not Tromsø, because of the former’s location near Russia», she told the Barents Observer during last year’s Barents Council Summit.

On the basis of Vassvik’s relationship with neighbouring Russia lie bilateral agreements between Finnmark and Murmansk Oblast, as well as the multilateral Barents Cooperation.

The latter includes four countries and 14 Nordic and Northwest Russian regions, and is seen as one of the still well-functioning gates for East-West cross-border cooperation

Finnmark wants to play a key role in the region and in October 2017 took over the 2-year rotating chair of the Barents Regional Council.

According to Ragnhild Vassvik, the Barents Cooperation will serve as a key axis in the new joint region’s high north policy work and does not exclude that the town of Vadsø will play a stronger role in regional cooperation with Russia.

«We have established a very good basis for cooperation, we have good contact with our Russian friends and it a perspective way to move forward, to keep the dialogue going.»

«We are not doing foreign policy, as such», she underlines and adds that her administration is careful not to exceed its powers in the field.

«But in the longer run, that could become the case as we get new responsibilities,» she argues.

For Vassvik and the Finnmark county government it is the responsibility for environment, climate and high north policy which is key upside point in the merger with Troms.

«These policy areas are something which ultimately could be attractive for young people and help them move north», she says to the Barents Observer.

She underlines that the government in Oslo must transfer powers and resources so that her administration in Vadsø can follow up.

«If that does not happen, the whole reform will be a failure.»